What Is More Impressive - Bigger Booth Or Packed Booth?

Conventional wisdom is that getting the biggest trade show booth one can afford is the best way to impress / signal to the market that a company is strong?

However, many commenters recently have been focusing on how packed a both is. 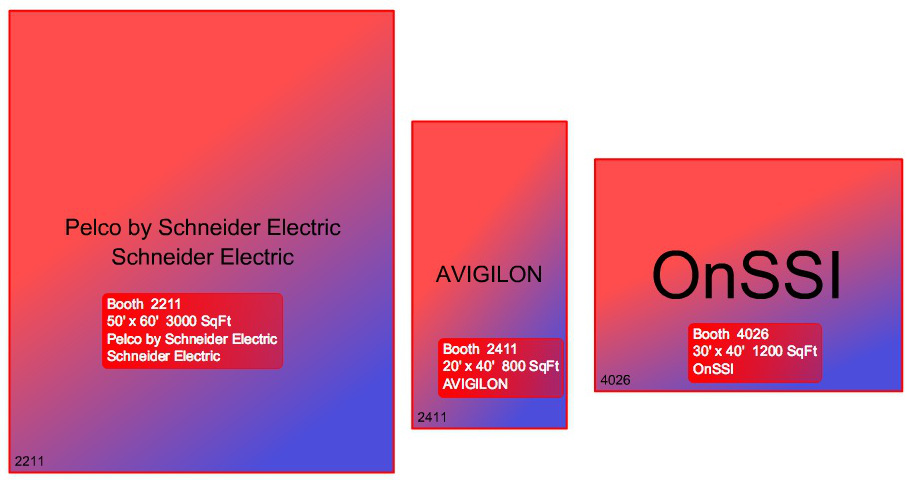 The smallest, by far, is Avigilon's. OnSSI's booth was 50% bigger and Pelco's booth was 275% larger. (Note Avigilon's revenue is getting quite close to Pelco's and Avigilon does more revenue in a month than OnSSI does in a year).

Yet, almost all agree, Avigilon's booth was the most packed, and many understandably argue it was the most impressive. Certainly, though, the much smaller booth size made it easier to be packed.

It raises an interesting question:

Should manufacturers get moderately smaller booths to make it more packed and therefore better signal their strength?

John, sorry for the maybe not "lordly" comment but in Italy we have a saying: "It's not a problem how much big you have it, but the way you use it!".....

I mean, I think that first of all if you have arguments and a good structure able to tell about them efficiently that's the effective way.. Of course, if on the contrary you don't have many arguments, the impressive size is (or may be?..) an instrument to hide that lack...

By this I don't want to say at all that Pelco has no arguments and Avigilon has!.. I think anyway as well that exhibitions at the moment are definitely not the main selling channel, on the contrary! Surely you must be there, because if you are not there the market asks why.. And somehow the "size" is also a way to show/measure the status of health of a consolidated vendor. It's like for a big car or a big boat: he has it, so he should be really very rich and powerful..

Perhaps, who is in the market since longer time has also some inertial "need" to show a certain size: they have always had a huge booth, so maybe if they don't have the same now someone may think that they are less "healthy".... While who is more "young" (as Avigilon for example) can have more flexibility in this kind of message..

Just to tell to you an example, I was exhibiting in Essen last week and surprisingly Samsung was not there!... Could you imagine what I heard then among the people there.... "What? Samsung is not there? How is possible? Oh yes, they had booked the booth but after they canceled... Oh yes and I heard that they went down.... Yes, yes, I heard it as well and I heard also that they are selling... Selling? No, I heard that they are firing out 1000 persons and closing....." And several other stupid stuff like that, I definitely suppose not true....:) But all the people was trying to find (and to show they know of course...) the reason why Samsung was not there......:))

You should have a 3rd option.

Get a size of booth that will fit your product solution and enough open space to make it comfortable.

This option seems the most logical to me. Pelco Schneider is big because they have many things/divisions. OnSSI does not need all that room. They usually have enough room to demo their product and a area for presentations/live presented demonstrations.

If I saw a filled booth, I would probably walk away and look for another booth. As long as your booth is not empty, a majority of time while the floor has a decent amount of people, then I just want to go to a booth that I feel comfortable in. If I really have to go to a booth that is busy because I have a question or want to see a new product, then I will walk buy that booth many times until I find an opening. The HID booth, at least in the past, is probably an example of a busy booth, but I or the person I'm with, usually have a question and I have to wait because it is busy.

I agree with this point. A tightly packed booth makes me want to walk away and come back later, even though my media pass ribbon usually motivates someone in the booth to give me quick attention.

Rather than wait in the traffic flow because the booth is too packed, I'd rather move on and circle back.

I won't stop at a booth if it is packed. If it is too busy I am not going to elbow my way through a crowd. If it is someone I would like to talk to I will try to swing through another time. If it is busy each time I will just forget about it. If I need to talk to them I would have a meeting scheduled already.

The only really packed booths I ever see anyway are the folks giving away prizes or beer!

Bigger booth. Half the time a booth is packed it is filled with sales people from the manufacturer to "inflate their stats."

Bigger booth costs more money and takes more effort in my opinion. Unless a booth is packed with end users/customers then having a really packed booth to me is not that impressive. Additionally, it could actually move people away from your booth because they won't have a quiet and comfortable environment to dig deep on the products being offered.

It depends on what the booth is packed with - customers or sales staff.

I also think we're oversimplifying it a little, since a good booth design (for example) can present products for new prospects in one spot, advanced features for existing customers in another spot, have a few tables for in-depth discussions such as design challenges or unresolved deployment problems. I have seen such booths with show-only personnel whose job is to staff the perimeter, encourage and qualify visitors, and direct them appropriately.

A few companies work hard to get appointments in advance with key customers and prospects they want to see.

When I ask how the show is going, due to my magazine affiliation, I get a "public relations" answer from folks I don't know personally, and the real picture from folks I know who are willing to tell me "off the record". But answers can be mixed across the same company's personnel, as to how good the show was from the perspective of their own individual roles.

It's common for the same show to be good for some exhibitors and not as good for others.