What Quizzes / Exams Should We Add?

Now, that we have rolled out our first 7 quizzes and the quiz manageent / assignment infrastructure, I am curious what else you would like us to add.

As a reminder, here are the 7 to start:

What else would you like to see added? There's a lot we are going to eventually cover but I am curious if there are any pressing topics / areas you think would be valuable for your companies.

People have asked for test only. We'd have to do something more difficult to prove someone really knows their stuff. Maybe a 1 hour phone call where a person has to explain things in greater depth (in addition to multiple choice, etc.)

The rationale is that when we do the class, people pass only after doing / proving a lot: attending classes, asking questions in class, commenting on discussions, doing 6 quizzes, a multiple choice final exam, a written essay exam and a resubmit where they explain and correct wrong answers on the final.

I would want something that is similar to that level of depth so that it does not degrade the overall certification.

And maybe offer a test only (no classes) certification route (IPVM GED?) for those who would dare try?

Kyle, good idea! We'll incorporate that. Also, help serve as a screener to identify people who are just not ready.

In the audio website I'm part of, Syn-Aud-Con, they have different tests related to the classes they offer. The tests reveal which of the classes offered might be the most beneficial to you. For instance, one might offer a test that would give the user an indication that the IP camera class would be beneficial to them if they scored poorly. This might be something to offer.

Brian, Thanks for the clarification.

Newbies and oldies gain or loose experience, (For me I quit running cable at retirement over a decade ago) and look to existing guidelines for decisions.

A few variables to consider when taking the quizzes. And a couple assumptions. Like what document might be the reference to use for a guideline? An electrical hand book? Does the answer consider (or ignore) local governments, additional or even sometimes conflicting requirements?

Additionally, are in floor conduits a consideration or just seldom used?

In many commercial buildings, walls are constructed to the bottom of the roof deck, or may even be designed fire walls. At the very least, pulling from one room to the other takes more time than one long continuous pull in a hallway. I think this is the problem you mention: 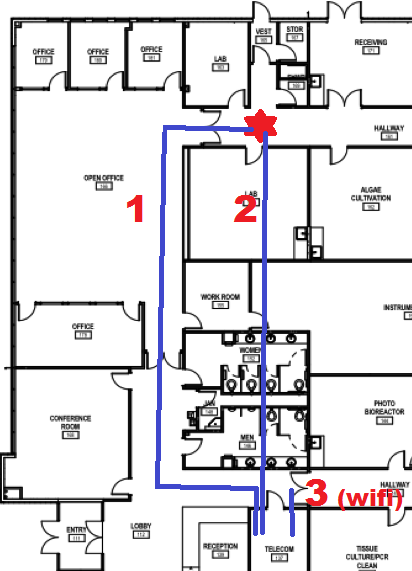 In this case, the wired pathway options take you:

1) A longer run with several bends overhead, but accessible from hallways and open rooms, or

2) A short run directly in the path of six or more walls framing two bathrooms, a lab room, and another interior work room.

In this case, the best answer of the options given is 'path 1', which despite additional length and 3 bends is less of a problem than fishing cable above private and mechanically complex areas like bathrooms (ie: ventilation systems, plumbing).

Does that help? If you have other questions on this one, I'll start a dedicated discussion.

Where is the place to go talk about it when you dont understand answer? You can move me to there.

With the cable/installation one i took the diagonal cable path that was shortest with 0 turns and yeah maybe i went right over a wall or four, so im wrong? Thats ok, but answer said that right answer was no 1 because it was the shortest that had fewest bends and crossed the least walls. So is least number of walls more important than least bends which is more important than shortest distance no matter what?

Tedor, good idea. We can have multiple levels too. An intro / basic one for those who know very little and then a more advanced one. Thanks!

A real world troubleshooting one, not of the classroom kind, like the ones you will get:

Can't make connection to camera, could be bad network cable or connection come loose at jack, no helpmate, dome is torxed shut, brother has the torx set with him, he is nearby, but you borrowed his cell phone and your on ladder, hardware hippo closes in 20 minutes too, etc.... Like those fox, chicken hen and seed problems that i could never get.