This is how the industry works. Either manufacturers send their press releases over to be copied, buy ads or run 'editorials', aka 'thought pieces' / nonsense marketing fluff in magazines.

I think we make this clear enough but again, we do not accept any advertisements, PR or submissions from manufacturers.

An email to us from IndigoVision: 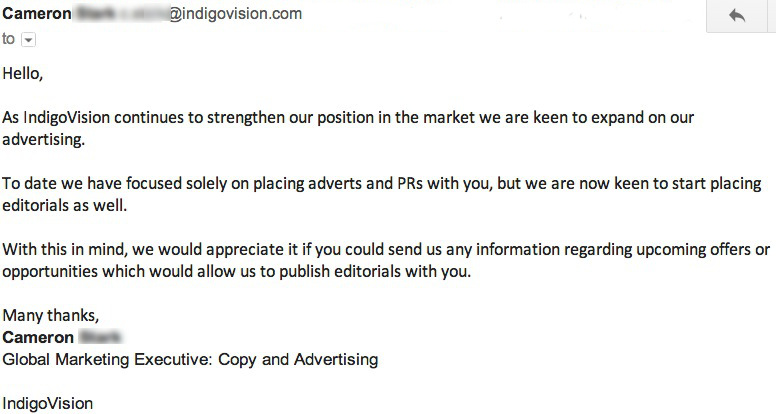 IndigoVision is especially clueless here. The last time we talked to them was their very obvious OEM / rebranding of a 20MP camera which they could not give a straight answer. Yet they are happy to write editorials for IPVM....

Huh? I don't understand what you're saying, John. Does both IndigoVision and IPVM have employees named Cameron? Or are you bashing someone named Cameron at IV for sending IPVM what is obviously a form letter they apparently sent to multiple media? It seems to me that if the latter is the case, it means that IPVM isn't getting the word out to manufacturers, or at least to IV, that IPVM is not a typical Surveillance-oriented media company.

I am trying to get the word out. Please pass this on to your IV rep.

I'll forward it to our rep but bear in mind, IV Corporate does read IPVM and I'm sure they've already seen this thread.

I just have to wonder what you do with all of the other emails you must receive along a similar vein. IPVM is a publication and I'm sure other companies have marketing people that bulk email that kind of stuff to every Security publication. Marketing people aren't going to go through every media contact and decide whether they really want to try to differentiate between general Security/Surveillance publications and something unique like IPVM.

After all, I'd be willing to bet Consumers Union gets a ton of similar stuff. It's not like IndigoVision attempted to use something published on IPVM in a piece of marketing material, which is something you could obviously object to. A polite response stating you don't accept advertising and/or those types of editorials would probably have more effect than my passing your diatribe up the IV chain.

Do I have your permission to quote your post?

I am sure IV will read it on their own.

My other point about sharing this is to give people a sense of how trade 'journalism' works. It's manufacturers either buying off coverage, writing their own coverage or ghostwriting coverage.

As for IV's tactic, there are not even a dozen publications that have any sort of readership. They should just send each of those publications a personalized note.

For those manufacturer PR people who really do not know the industry, here's a quick recap of who is looking for manufacturer 'editorials':

As for others, I don't believe SDM runs manufacturer 'editorials' but they do copy press release announcements in the news section. Also worth noting is ASIS Security Management publications who does not take manufacturer editorials but recently started selling case studies to manufacturers for $3,000 (see page 11 here).