I have an exit alarmed door I don't want folks triggering because they are too lazy to go back up the stairs. Would like to use a simple voice annunciator to warn the would be offender that he is approaching an alarmed exit before the decision is made to go down that last flight of stairs. Cant use delayed egress or locks that release on fire alarm. Will also put a sign but a voice annunciator would seem to be better. May connect it to an alarm input on a camera.

Anyone know of a good product for this? Anyone used this strategy before?

We have designed many systems with exactly the feature you are describing. I typically specify an Elk Voice Module, Elk Interior Speaker, and a Bosch DS150 Motion Detector.

Thanks. This has got to be a record reply! Did it work for your client? Is it installed in a situation where they had problems before? If so, did it reduce or resolve the problem? Here is one I found that is self contained.

In the cases where we have used this arrangement, it was part of the overall design of a system for a new facility. Because the facility wasn't built yet, we installed it in anticipation of the problem and after construction, it seems to be working as expected. When the buildings were first occupied, a lot of people seemed to activate the sounder, but after a short time, they learned not to head down the stair. Because the alarm only sounds within the stair (it is not monitored by the security command center), an occasional activation is not really a problem.

I like using the REX type motion detector because it allows the detection pattern to be tightly controlled. The self-contained one that you found seems like it would work but I know nothing about this manufacturer.

Agree, in this case, its a stairwell and like yours, the device will be located in a new building on the first floor, just before a commitment is made to go down the "stair of no return" and bust though the alarmed exit.

Its good to know that others have brained on this issue; but I would like know if it actually stopped the door from being violated. Kinda before and after thing.

Also just recently used this arrangement in a bleach plant. Employees passing from the office area to manufacturing area are reminded to put on safety equipment (protective glasses, earplugs, etc.) as they approach the door to enter.

I have done this in the past as an integrator, with nearly the same bits that Mr. Silva uses.

The application: Areas where Delayed Egress is not allowed by the AHJ. The door may have to be unlocked and free by code, but you can hook up voice annunciation and loudspeaker and bring attention to it regardless: 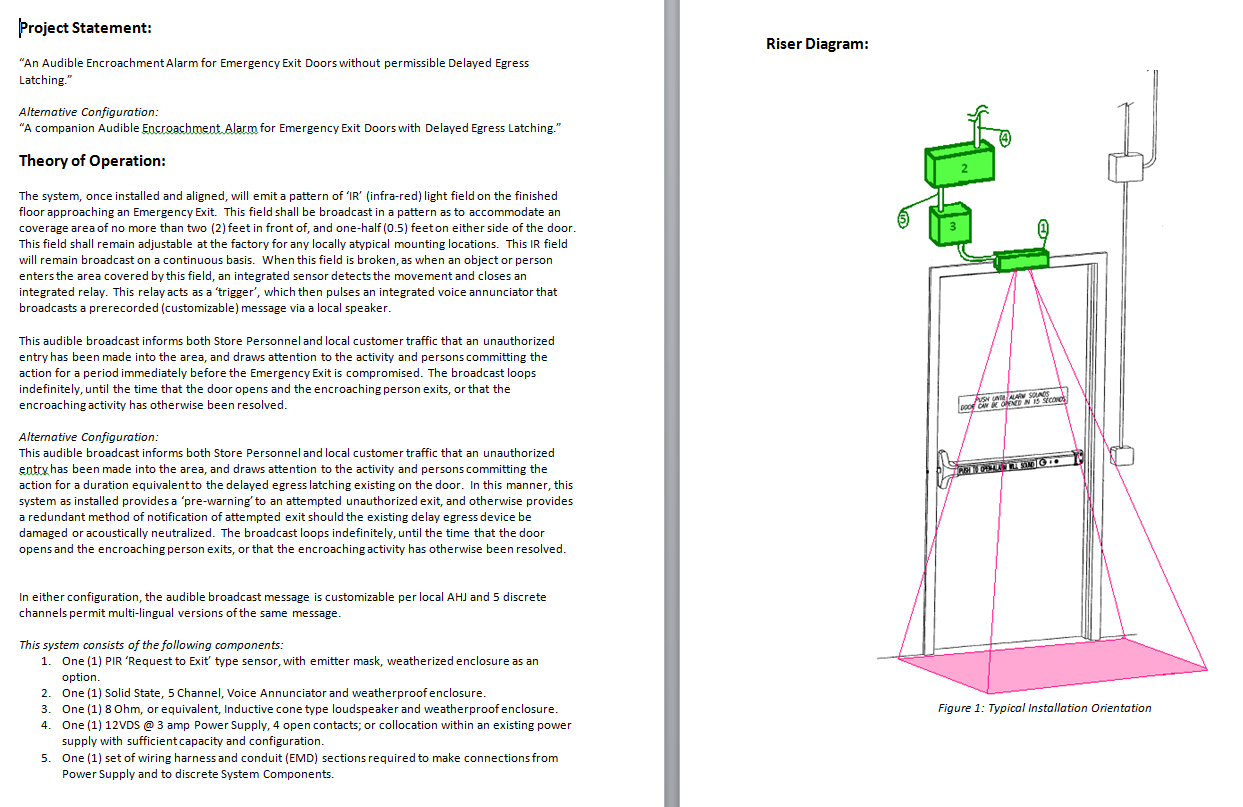 You can use the USB uploading connector and upload custom messages to that Elk Annunciator. I used this free 'Text to Voice' site, but there countless others.

How does the multi-language thing work? Does it loop thru all the languages on playback?

Is it easily changed in the field, for instance by hotel staff before a Greek Wedding?

It was a back-to-back loop of English, French, and Spanish. Nothing fancy.

Brian, that's a a nice narrative and drawing.

In the cases where the system was installed as a pre-warning to an emergency exit alarm on the floor below, we installed the motion detector on the stair landing above rather than at the door itself. This provides advance warning to people as they are heading down the stairs, hopefully causing them to turn around before they even get close to the door.

Yes that is exactly the plan..