Thermal Camera Performance During The Day?

This might be a dumb question but I'm wondering about their use during broad daylight. Any thoughts?

Can you be more specific? As in why would you use them during broad daylight, performance differences vs. night, etc.?

No real reason really... maybe curiosity. it just occurred to me that I think of thermal cameras use strictly for night or complete darkness. So I wondered what the differences would be.

Well, pretty much, thermal cameras look exactly the same in the day as they do at night. I say pretty much, because the sun does have some effect if it's in the back of the shot, and temperatures are generally higher, so contrast is lower.

I do think that locations simply looking for detection, not identification, will often use thermal 24/7. If you take this image from the first round of thermal testing I did, for example, at 1800': 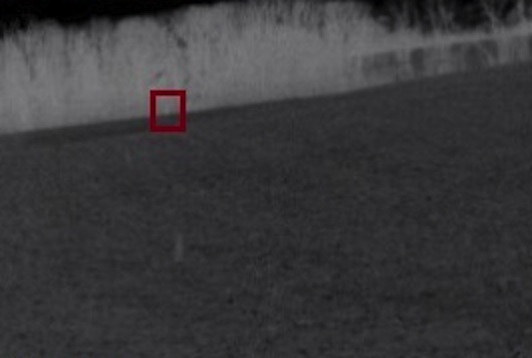 Those few pixels are hard enough to see in the thermal image, but if that subject was wearing anything other than blaze orange, I doubt you'd be able to spot him. The thermal manufacturers we've talked to tell us that in high security installs, where this is the case, the prevalance of thermal/visible pan/tilt units is much higher than we'd think because of that. It's the best of both worlds, and horrendously expensive!

We have thermal cameras in use exactly as Ethan describes: three of them on a 50' tower in the middle of a two-square-block lot, along with a Pelco Esprit PTZ. The cameras feed a video analytics processor whose outputs then trigger different zones on an alarm panel tied to a monitoring station, and trigger inputs on the DVR to call PTZ presents relative to the zone. The monitoring station has a dedicated client machine connected to the DVR so they can check the cameras for activity.

There really is very little difference between day and night, sunny or not - actually, I think in our case, the contrast is a little better in sunlight, because the sun heats different objects in the yard differently (it's a crane yard, so there's lot of metal, vehicles, truck trailers, etc.). Where it really loses contrast is on cool, drizzly days, even moreso than foggy days. A blanket of snow gives particularly interesting results, although people in the yard REALLY stand out in snow.

Thank you both... that really is most interesting to learn. Maybe you can share an image or two?

Here are some older ones... thermal camera is a FLIR SR-19.

Thermal, day (yeah, the cover-all was added after the tower base was already in place, there was no way to avoid it): 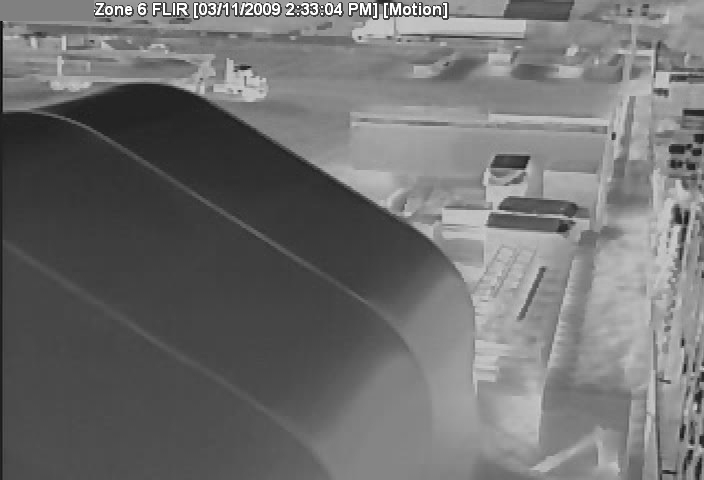 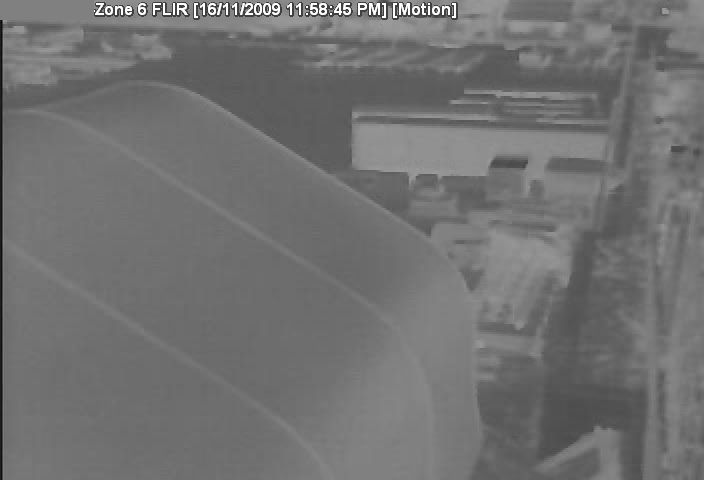 And visible at night (on the Esprit): 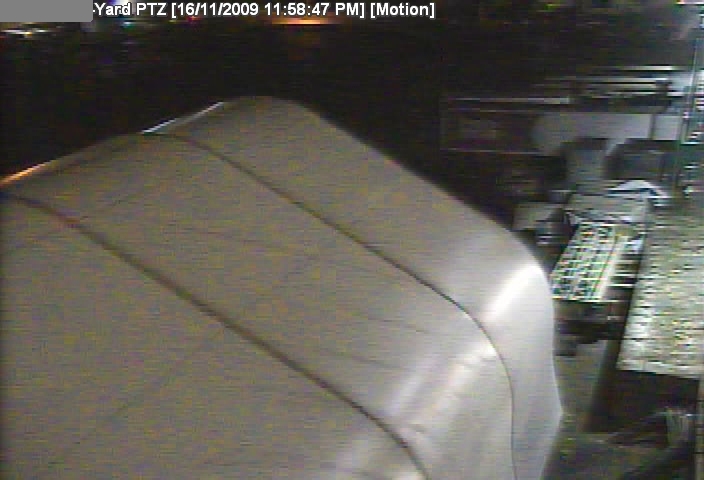 Every camera "sees" something. Optical cameras see light that is reflected from objects in the field of view and focused through a lens onto an image sensor.

Thermal cameras see heat radiated from objects in the field of view, which passes through a lens (in this case made of thermally transparent germanium compounds, instead of optically transparent glass/plastic compunds).

Much like cameras can have glass (expensive) or plastic (cheap) lenses, thermal cameras can also have different lens compounds (germanium based or poly based), which will affect the equivalent image quality/contrast.

Heat is radiated by objects 24/7, so thermal cameras work 24/7, they have no concept of day and night and generally speaking looking at a series of unlabelled images you can't really tell which are from daytime, and which are from night time (OK, if you've worked a lot with thermal cameras you start to pick up on how certain objects collect, retain, and release heat, and you can sort of tell when an image might have been taken).

Every camera (or sensor for that matter) has its strong points and weak points. If you point most optical cameras at the sun, or put them in a room with practically no light, you'll get a poor quality image. A thermal camera in those same situations would generally give you a better exposed image. The weakpoint with a thermal camera comes at the point(s) of the day when the thermal contrast is low. If it's around 98 degrees out, humans are going to stand out less in the FOV than when it's 80 degrees out, because there is less thermal contrast between them and the surrounding air. Large metal structures can have times of day where their contrast relative to the rest of the scene is greatly reduced, etc. These times seem to generally fall around 1-2PM (ish) and 3-4 AM (ish).

When You need to know , There is no excuse

"Positive ID is absolute"? You're not going to ID anyone using a thermal camera.

Here a few examples as well. The positioning is temporary due to constructions.

Here is a video with some clips from FLIR cameras, these are mostly daytime to early evening, certainly during a time when most Day/Night cameras would be in day/color mode:

The clips from the 625 at the end of the video, and the overpass were at night, IIRC. In the clip of the person walking on the '625, you can see the parking lot lights are bright/hot at the top, indicating they were powered on at the time.

This is great information and many thanks to all who contributed. I have certainly learned quite a bit. This is such a wonderful thing to be able to ask a question and then receive fantastic responses that turns this into a great learning experience. My thanks to you all!