I spoke to someone today (whose personal details will remain anonymous) involved in a court case where the site/organization is being sued for poor night time video quality. Evidently, they did not have street lights in their parking lot. Because of that the cameras did not capture a usable image of the subject. The police arrested the wrong person. The right person is still at large (presumably), etc.

This brings the question - Is the organization legally at fault for not having that street lighting that directly contributed to unusable video surveillance images?

I am not aware of any specific court cases, but I have to imagine something is out there - one way or the other.

Compare to our review of "Sued for Not Having Enough Surveillance" where the legal trend appears to minimize the importance of having working surveillance cameras. However, would this differ if the cameras were impacting by something more fundamental - insufficient lighting?

I dunno, my guess would be that the burden of proof, as it were, would be similar in both cases, in that the complainant would have to show the defendant had implied a certain level of coverage/quality and then failed to provide it. Signs like "Area recorded by video surveillance" are a far cry from "The video of this parking lot is so good, we can see the nosehairs of a fly in pitch darkness".

Understand the reasons for the limited information but it does make it hard to determine what may be the true facts of the case. From a legal / criminal standpoint, certainly no culpability. On the civil side, I would agree with Matt in that unless they overtly established a false level of protection or surveillance there should not be liability. If there had been similar criminal incidents and each time the video was useless then perhaps a slight issue could be raised but common sense has never stopped the filing of a law suit.

I can't imagine a lack of evidence or an image of poor quality would be the nexus for a false arrest it was a felony crime and the officer used reasonable suspicion and the involved witness/es did not lie. Most government agencies can not be sued for false arrest if reasonable suspicion was used but then this just usually leaves a plaintiff looking for someone else somehow involved to go after.

If it was predicated on a citizen arrest for what is usually a misdemeanor crime then yes, the citizen is the responsible party for the actual arrest and can be subject to criminal and civil penalties if found to be in error or have lied.

My impression was that they were going to try to establish that minimum level of night time light is an accepted best practice for security and that studies show that having light decreases crime (e.g., CPTED). They might make the case that the owner/site/organization should have known this and was derelict in doing so.

In my mind, the owner could have a responsibility to provide reasonable lighting of the areas that pedestrians would need to access, IF and ONLY IF the premises are expected to be or advertised as "open after dark". The same theory could apply to any video system but that COULD be modified by the specifications that were used to purchase it. If there was no light level or illumination spec requirements then they might not have a leg to stand on. If there were illumination specs and they had been met, then NO leg to stand on. Another possibility is what could happen if the power was out or the generator failed to start? I don't know if there can be any legal expectation of lighting unless it is advertised as such.

Expecting that an employee regularly work after dark may very well be the deciding factor in the culpability of the owner.

If this was a "Public Entity" there could also be other legal limitations on the ability to sue them.

Something to consider when it can get dark before 5:00PM here in the Northeast as that alone might count as "common knowledge" and leave the client liable as John states.

This area was definitely advertised as being opened after dark.

Let's make this more concrete. Imagine if it was a Wal-Mart and they decided not to put any lighting in their parking lots (not simply that they were broken but they made a design decision simply to go without). My gut feel tells me that they would be exposing themselves to liability. Note, of course, I've never seen a Wal-Mart parking lot without lighting.

No commercial/institutional entity should EVER knowingly go without "some" parking lot lighting where there was a defined paved parking space that could be occupied.

That said, Wal-Mart near where I live has an unpaved parking area open for future development that does NOT have complete lighting. However, they allow people to "camp" there with RV's.

Wal-Mart does have MANY fixed box cameras at this site but they are NOT pointed out at the parking area's, only the immediate fringes of parking where entering and exiting the building.

The trouble is, merely existing is enough reason to be sued these days.

Imagine if it was a Wal-Mart and they decided not to put any lighting in their parking lots (not simply that they were broken but they made a design decision simply to go without). My gut feel tells me that they would be exposing themselves to liability.

I have a feeling the main liability concern there would be people tripping over things or getting run over or being accosted at their cars; I don't know that having good lighting for surveillance would be a determining factor in that design decision... maybe just, gravy.

The fact is that if the lighting is good enough to see for prevention of slip and fall then there are enough lux to take decent video if it's not too far from the camera and light source and the camera is not purchased from a big box store.

"Sometimes, you get exactly what you didn't pay for" (a tongue in cheek corollary to Caveat Emptor).

"Sometimes, you get exactly what you didn't pay for" - I love it!

Pretty sure Wal-Mart get cameras from various vendors but not sure about VMS or DVR/NVR systems. All contracts state that Wal-Mart provides the (analog) equipment, and the electrical contractor just installs them. Then a Wal-Mart crew comes out to make adjustments and set them up.

Seems to me the last time I looked in a local Wal-Mart, they had Axis cameras over all the checkouts. I could be thinking of somewhere else, though... and it might be different for the Canadian stores. I'll make it a point to take a look next time I'm in one.

I DID see this gem (apparently working) in the A/V department of one Wal-Mart: 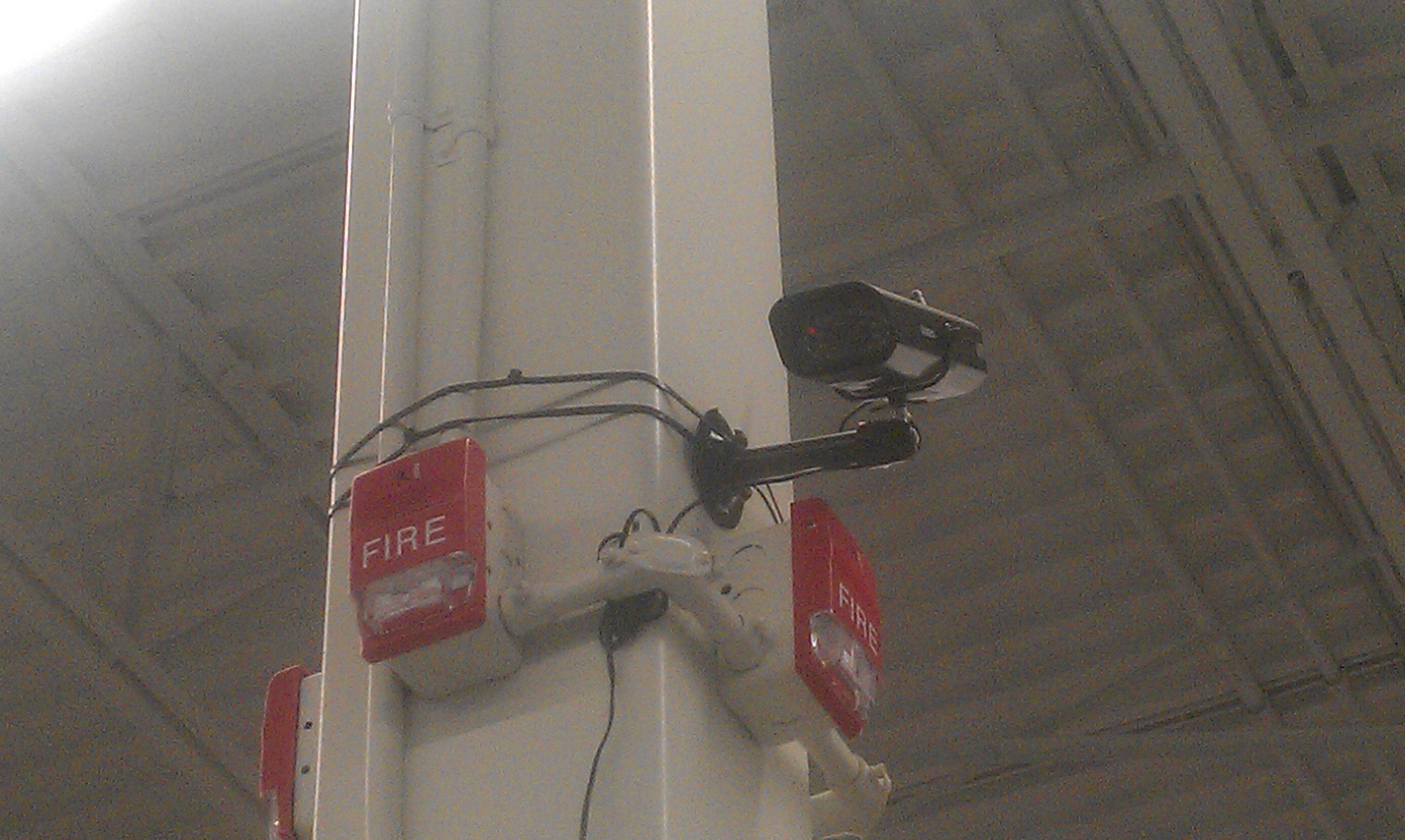 Clerk wondered what I was taking a picture of... my co-worker and I told him what we do and that we were getting a chuckle over the install. Clerk said he'd done it because his manager wanted cameras put up with one of the box systems they were selling. D-oh! BTW, the power cord runs down to a post-mounted outlet about 6'6" high...

I have firsthand experience working on Wal-Mart projects. For the projects I worked on, they used a mix of equipment in a system designed by Wren Solutions and installed by Checkpoint Systems (on a competitively bid contract basis).

In my experience, neither the electrical contractor nor Wal-Mart LP has much to do with the installation and setup of video surveillance. That may not always be the case, or might be different in different regions. 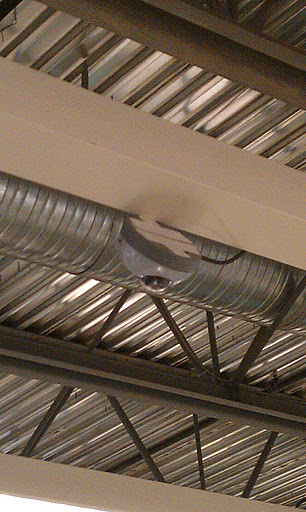 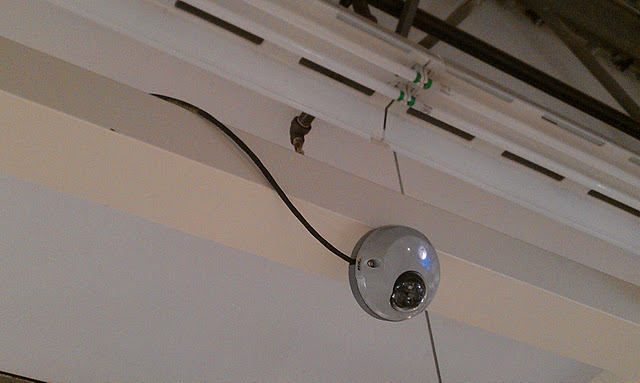 As I said, the EC wires and "installs" (call it mounting) while Wal-Marts contractor does the rest (Setup, configuration, etc etc) Never mentioned any manufacturers

While there are some interesting points made, this has become significantly off topic. If anyone wants to discuss installation practices at big box retailers, start a new discussion. Please keep this about the issue of liability for poor night time video quality.

My question is: let's say this case wins. How much of a stretch is it that the next case is for having poor daytime video quality? It would seem not very much.

On a slightly related topic, I wonder if the same kind of liability thinking would apply to something like that Ikea camera picture, where a working camera is rendered non-functional or non-effective simply thorugh poor or improper installation? "That trip and fall wasn't my fault and I could have proved it if that camera was pointing where it was supposed to be pointing!" (The camera in the photo was installed at the top of an escalator, BTW, but was aimed at the floor the way it was dangling).

That's probably worthy of its own thread as well, being a much larger macro of this subject.

I think this case rests on whether one accepts that night lighting is required for security / safety purposes. As the other cases we examined showed, surveillance itself is generally not accepted as deterring or preventing crimes. However, night lighting may be.

I think this case rests on whether one accepts that night lighting is required for security / safety purposes.

I think that's pretty much a given these days, as Dan and I noted above, and probably has been for a long time... at least as far as PERSONAL safety/security goes, vs. surveillance security.

As the other cases we examined showed, surveillance itself is generally not accepted as deterring or preventing crimes. However, night lighting may be.

True, but this case is (apparently) very different, if the claim is indeed that the police arrested the wrong person based on poor video quality.

Who is to say that someone did not fiddle with the settings AFTER the system was originally set up?