This is, well, ridiculous.

Last year, you may recall, a Colorado based company launched a 'security robot' (reviewed here).

Now, another company, this time from Silicon Valley, is planning to release one (that the NYTimes says, in a long article, looks like R2D2 and is "the night watchmen of the future").

The company, Knightscope, is an extremely early stage startup who said they launched after Sandy Hook (less than one year ago).

"These robots need perfectly flat, even, smooth surfaces. They cannot go too fast, least they knock an innocent bystander someone over."

- Reminds me of some Security Guards I've seen ;-)

The author of the NYTimes article responded to my email to him raising the point about others being first and farther along on this.

" I know of a number of others as well. I didn’t mean to say these guys were first… That said, I don’t know of anyone else who has been so vocal about weaving a mobile security system into the Internet…."

That's truly bizarre. So simply saying they were thinking / planning on 'weaving a mobile security system' gets them a featured article in the NYTimes? It's not like they have any real product or actual implementation of this.

It's already been done anyway:

Actually, their video is even funnier than the one I posted.

"Imagine a friend that can see, hear, feel and smell that would tirelessly watch over your neighborhood, keep your loved ones safe and put a smile on anyone walking by your business."

"Smile" is a bit under-descriptive. I would guess the correct term would be either "ROTFL" or "Fear-stricken".

And they're missing the boat by not considering adding a holographic projector: 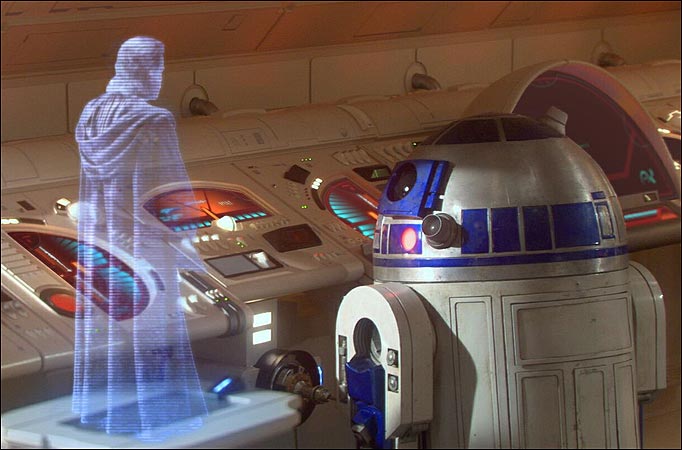 "The perp was dressed in a long, flowing robe." 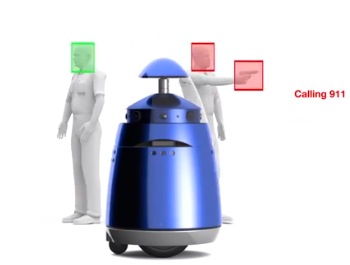 Watch for the 3VR and BRS Labs integration :)

Israeli defence company Magal s3 has released a perimeter robot on a track along a smart fence called Roboguard. The robot can have a camera, intercom and pepperspray amongst other payloads according to website.

Here's their one page PDF overview and their marketing video:

It's different and not as ambitious /insane as the robot above, but it seems to be more sensible.

This robo-guard concept has been around since the 80's:

As someone with substantial expertise in kicking over porta-potties in my youth, I am 0% intimidated by a security robot. 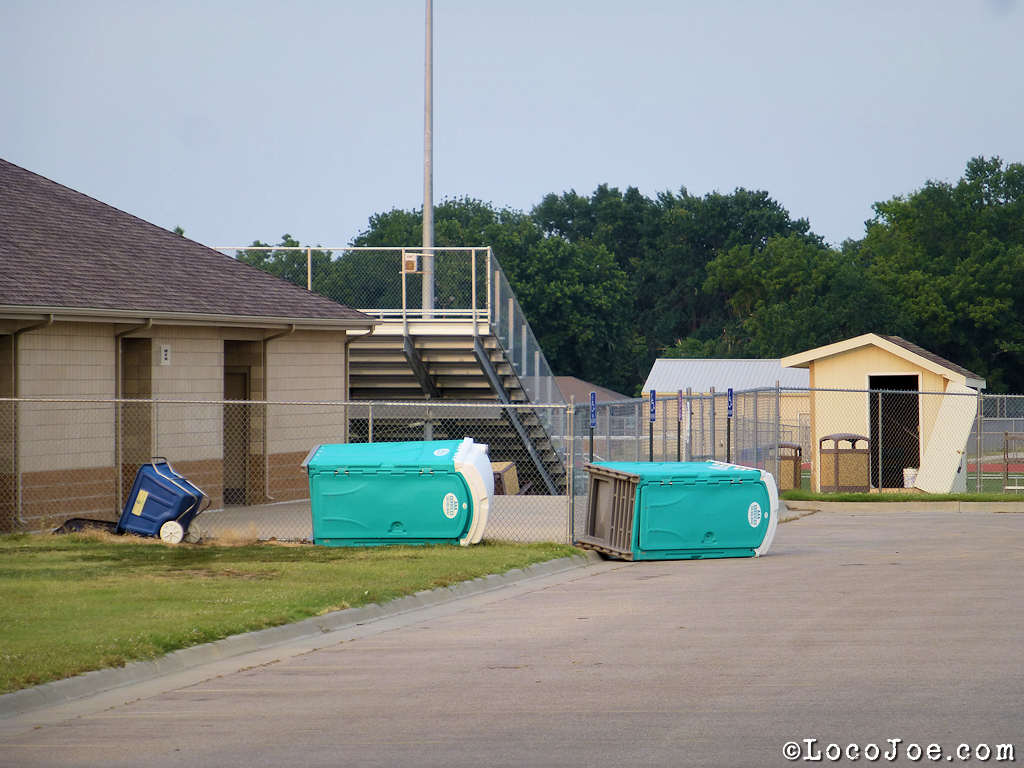 I dunno about "looks like R2D2"... looks more to me like the bastard child of R2 and a Dalek.

Yeah, go ahead and be scared now.

Thanks. I must have missed that episode of 'Person of Interest'.

Yea Brian, just how tough would you be if the robot had a sharks with laser beams in addition to GPS???

I hear those are hard to get.

Well it does make sense to me !

Having been an R&D engineer in high end video-analytics for years, I believe it should be feasible.

Every technology seperately they're describing on their website, already exists, is in development or feasible.

What they're merely doing is combining all this technologies in a nice futuristic designed "egg", which looks mechanically pretty stable as well, and modifications to let it walk over rough underground should be not too hard neither.

I admit, it is an ambitious project and they're making a lot of claims. But not impossible.

Given the composition of their team, I also think they have a strong multi-disciplinar skilled team to bring this to reality.

I also think this is not a replacement guard for standard outdoor security, but has more future inside industrial environments, where the atmosphere is hostile for humans due to chemicals or radio-activity, where this little robot can combine security with safety and advanced sensors for process-measurements.

Regarding technology, it's all feasible. The only question on my mind : their businessplan. Will they get enough funding to develop their product from concept untill finished product, and will they be able to sell it.

But for me, it looks like a perfect product design. If it could also do the dishes, swipe the floor, and make diner, and I would have enough money to buy one, I would buy it ;-)

I do believe this is the future. Not for within a year, but given 5-10 years, devices like these will be common in industrial plants, and in the household.

Furthermore, I hear a lot of calls on this platform for more innovation in security industry and a long-term vision, but when a smart, futuristic idea comes along, it gets ridiculised because at this time, we can not imagine it, or compare it with past mis-designs.

Please, instead take a closer look at it, value it's benefits and (try to) see what's possible with it, not directly tomorrow, but on the long run. The concept looks good, the team looks like an A-team, and I can already think of a number of applications, other then just plain perimeter protection.

I have to agree with Maggy on this one.

While their video is rather dramatic and perhaps makes some outlandish claims and they lack a working model, the primary costs in manned security is the personnel to do it. A device such as this may offer an opportunity to potentially reduce manpower cost and/or serve as a force multiplier for the manned security industry.

It will be interesting what the future holds for this type of technology. Bomb squads and IED disposal teams in the military already use similar technology. We've also deployed technology like this to the surface of Mars with rovers.

Good luck getting it to climb stairs though...

There is a theory that says (in summary) if you wait long enough, random atoms will collect together to form any object. So, one day, a fully functional security robot should materialize out of thin air, and that will also be at about the time there is a market for it...

A problem that I see, is that the robotics problem is the easier part. Robotics is much more of a solved problem than analytics, there are already robots that can climb stairs, navigate rough terrain, and more. However, we do not have video analytics at a state where a robotics can roam around freely (or on a programmed course) and analyze things to provide security in a practical application in real time. So basically, when and if this becomes viable you'll probably see an "analytics" company develop a robot before you see a robotics company develop a security 'bot.

From the few companies I've personally seen and talked to over the years (the first "security bot" I saw was at the 2008 ISC West), everyone is trying to outsource/OEM the majority of the machine vision/video analytics part. To me that is a non-commoditized core component of the product or solution. It's usually not a good idea to OEM something that is essential to the very existence of your product.

Most of the applications I've heard mentioned don't have a lot of merit (just MHO).

A roaming guard? Kick it over.

A hostile environment? Either humans wouldn't be working there anyway, or it's a very 1-off situation where cameras mounted on remote controlled platforms already exist and are in use.

It's usually not a good idea to OEM something that is essential to the very existence of your product.

I detect a super-subtle and utterly unprovable jab at ONSSI here ;)

For the record, no, not at all.