The equipment has to be small enough to fit in a shooting booth you would find at a gun range, as each individual would have their own control to view thier shots on the target from 100 to 1000 yards.

Each shooting stall would also have its own TV and for the zoom control on the 100-1000 would look for something easy perhaps even resets.

This is going to be a reader's choice :)

The camera needs to zoom out 1000 yards and see what level of detail - bullet holes in the target?

John, Yes they want to see the details of the bullet holes in the target. When in the Marines back in the late 70"s the furthest we shot was 500 yards (non-sniper) M16. We would have human "target placers" meaning they were behind/under the hill and would wave a white sign and have your holes marked with white, so you knew where you shot.

I cannot provide a solution but I always like to help someone that asks.

We discussed the core issues in super long range monitoring in a post about viewing a face 3000 meters away. While this is not as 'mission impossible' as that one, it's still very challenging.

Roughly speaking, you need a 1500mm lens to zoom that far away and give details in a 10 foot wide FoV. For reference's sake, most speeddomes top out at ~100mm. Our previous discussion lists some options, all of which are fairly big (the lens itself is about 5 feet long) and expensive (thousands just for the lens).

Thanks John I will look at those resources.

Brian it is an outdoor range.

It might be cheaper to come up with a self-contained 'target cam' that is placed near the target where it is positioned.

Move the backstop, setup the camera to view the target from nearby.

Obviously, errant shots ...err 'flyers' are a concern if they hit the equipment, but presuming people are competitively shooting at >100 yards, they aren't hacks with rifles anyway.

There's also Tannerite targets. You don't really need zoom to grade out a hit with that stuff.

Expanding on Brian's point, you could have a regular camera close to the target and a wireless link back to a monitor in the booth. This would be a lot less expensive though you'd only get the up close view.

That makes my first idea a lot less practical.

Being able to get a clear, stable shot at something 1000 yards away is going to be on the upper end of the difficulty scale, without getting rather expensive.

I would mount 3 fixed analog cameras, 1 covering 0-50 yards, 1 covering 50-100 yards, and 1 covering 100-300 yards. Using 55mm,100mm and,200mm lenses respectively. Find a simple monitor with 3 inputs, or a 3 or 4 input switcher and wire it up. This would likely be cheaper than a PTZ setup, and less prone to breakdowns. Plus, it would be faster/easier for the shooters to control.

IME, a scope is going to provide MUCH better detail for the 250 yard + ranges, and is going to be an absolute requirement on the rifle at those ranges anyway. Shorter distances (and 300 yards is getting pretty long) you have a higher chance of people using low power scopes and/or iron sights, where a "close up" view of the target could be more valuable.

If it was indoors I was going to suggest placing cameras down the range, so that you could stay within ~200 yards of the target. There are ways to do that in an outdoor range as well, but it'll most likely require the cameras to be mounted on ground poles, instead of hung from a ceiling, and you'd have to do a little more to deal with bullet proofing them, and it could get in the way of turf maintenance.

Brian K has a good point. Because spotting scopes are standard issue at the types of ranges, it might be possible to build an 'public observation' station using a scope built with video outputs. Bushnell used to sell something along these lines, but I do not think it had the range you're looking to get. I'll try to find a cut sheet and see if that helps.

There are also telescope adapters that would get you a shot out to that distance, but it's probably going to result in a kludgy setup that may or may not survive the environments of an outdoor range very well.

This is one of those projects where you have to unravel customer "needs" from customer "wants" a little more upfront in order to reduce time wasted developing a solution that isn't going to work IRL.

Ever notice how much differently the specs are listed for binoculars and scopes? Magnification power (rather than zoom range) and objective lens size (bigger = brighter) vs. focal length, aperture, FOV, etc. No wonder "laypersons" get confused by CCTV specs!

Brian K gets 5 'thought leader' points for his helpful insights. 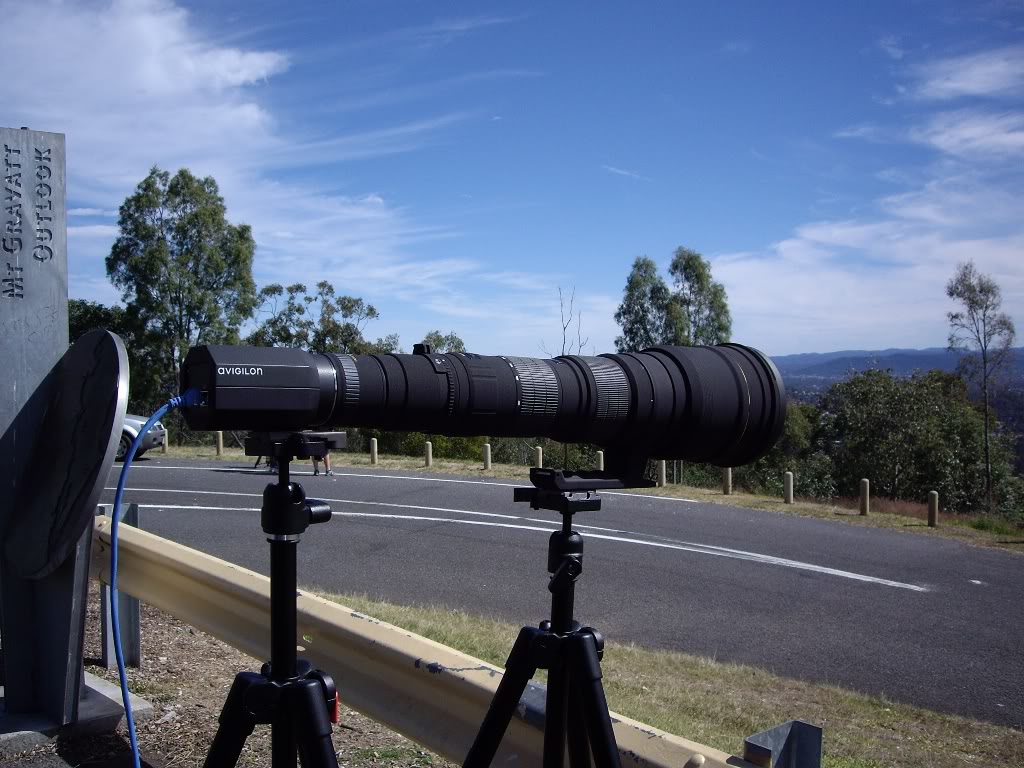 I want to attach a giant EF rig to a CS mount camera with this adapter ring. Make it look extra silly.

Damn, I may have to pick one of those up "just because" :) Only catch is you'd have no iris control, iris would have to be wide open all the time, but hey, for under $35?

Oh yeah, I just bought 2 of those adapters. No idea what I'll do with them, but you can't NOT have that once you know it exists.

Exactly - especially if you already have a Canon DSLR rig :)