I am doing some repair work on a site that has a maglock on a herculite door. I understand in most circumstances we need 2 means of egress. This door has a regular mushroom emergency exit button wired to an altronix timer to give it a delay when pushed. Besides the fact that it isn't set to the required 30 seconds of open time isn't this a code violation? The button should directly interrupt power at the door and shouldn't rely on another electronic component (which can fail even if it simply loses power). They also oddly enough have the motion detector which has it's own timer wired in parallel with the button to the same trigger input on the altronix timer? It like the button isn't breaking the power directly eithere. It's so odd but is this in any way shape or form sound like it's wired properly? I think it's a mess. I always wire a pneumatic button and the motion or other device in series with power to the mag lock so they depend on nothing else to open that door.

Also, how do you handle a situation such as this when you know darn well the door isn't compliant and you were the last one to touch it to do a repair? Do you make the customer sign a disclaimer or something?

Best place I read about doors and Code stuff..

First, this opening is not legal, and unless the AHJ has explicitly approved it and the exemption is on record it needs to be changed.

1. Delayed Egress is strictly defined in NFPA 101 as needing signage at the door, ie: 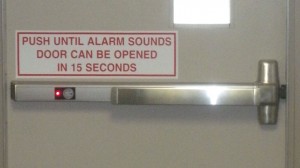 2. If not on the door, the button itself also needs to be clearly identified (even lighted) as the trigger for door release, ie: 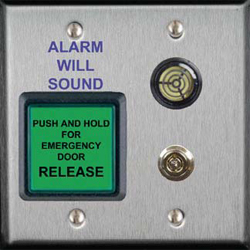 3. There also needs to be an alarm sound for the delay period.

4. Also, the door needs to have emergency lighting.

If any of these four points are not present, it is illegal.

A 30 second delay is not typical, and while approved under code, typical requires explicit approval of the AHJ (Fire Marshal) and is almost always 15 seconds.

Approved, listed, delayed egress locks shall be permitted to be installed on doors serving any occupancy except Groups Assembly, Education and High-Hazard occupancies in buildings that are equipped with an automatic sprinkler system or an approved automatic smoke or heat detection system.

Let the customer know they have a door that doesn't meet code. Ask them why they need delayed egress on this door to begin with. On your own, confirm the AHJ approves delayed egress in the area. (Again, start with the fire marshal.)

You are procedurally correct on the power interruption design of the pushbutton. The button should directly interrupt lock power, not control an input contact on the controller.

in the US, does the requirement to have an electromecanic panic bar on any door with a mag lock only apply to those doors identified as "egress doors" (or those in the exit path for evacuation) or does it apply to all maglock-equipped-doors?

of course, all maglocks must unlock upon a fire alarm or when they lose power but I was under the impression that the panic bar with a 15-second delay only applied to doors identified as egress doors

However, most cases for delayed egress include a panic device especially designed to meet all the requirements: signage, alarm, manual relock, and so on.

How does delayed egress differ in your country?

It's the same in Canada- they use NFPA here to make their building code rules, just like in the US.

My question was mostly to understand if a stockroom door or a private office door (doors that are not in the egress path) needed panic bars. In Canada they do not (although they do need connection to the fire panel and must unlock if power is lost) if the door is not identified as an egress door.

Also important: Does the building have a fire alarm and sprinkler system? If not, delayed egress is not allowed, ie:

"Approved, listed, delayed egress locks shall be permitted to be installed on doors serving any occupancy except Groups Assembly, Education and High-Hazard occupancies in buildings that are equipped with an automatic sprinkler system or an approved automatic smoke or heat detection system."

Talking to the code authorities is key here, really. Which code is adopted can change where it is legal, ie:

I changed the title. If you're adding any timed delay to exiting a door, it is 'delayed egress'.

There is no delay in allowing egress. Egress is immediate. The "delay" is to hold the door open for the unlock time period. Without the Altronix timer the emergency push to exit button is only momentary and will relock immediately. They didn't use a pneumatic push button so they are using the timer to hold the door open for 5 seconds. They have the motion tied into the same timer.

is this door in the evacuation path of the building? If yes, that makes it an egress door and it is subject to all of the rules and regulations stipulated by Brian above. There is NO fooling around with this, you can kill people in a fire if that door is not properly done (yes, even if that door is a pretty glass herculite door).

Only the AHJ can approve a door that deviates from code.

Oh I see. This part threw me: "This door has a regular mushroom emergency exit button wired to an altronix timer to give it a delay when pushed. "

However, as you describe, things are still not legal. See: Deadly Pushbuttons

Notice among the key requirements are two key elements:

Let the customer know their door doesn't meet code, the an inspector or insurer would require it fixed.

The problem is that people don't want to be told that Company T installed their system unsafely and that they have to spend more money to fix it. We run across this all the time and I think I will have to have to speak to my lawyer about having them sign something if they choose not to go ahead with the changes. Honestly I very rarely see access control done properly when using mag locks.

Does the code specifically state that doors with mag locks MUST be wired into the fire alarm to open upon alarm?

Brian got this going in a different direction than the original question.... This was not about delayed egress with the pictures he posted..... It's the part about timing to remain open in a failure mode.

While the codes continue to evolve, overlap, and conflict, the AHJ will always rule.

In the case presented, I agree it is wrong, depending on how the system is wired. A number of manufacturers say their electronic timers in the buttons meet the code because they are fail safe when their relays are wired in series with the mag lock. If the button just hits the egress terminals of the panel, that's wrong. Having both the motion detector and button wired in series is OK, but again is a matter of interpretation. The motion hits the egress of the panel and unlocks the door for a normal card read period. The button is the secondary means if the panel or motion fails, and must directly interrupt the power to the lock.

I personally like the pneumatic buttons, but they too fail the 30 second test as they age or in some temperature settings.

I'm now heavily pushing the "no prior knowledge" panic devices. In many cases the AHJ are up to speed on these and allow them, as the code states, to change the characteristic of the door back to a standard locking door. It makes a nice neat install without clicking motions and ugly buttons. The ones I try to use have two contacts, one that hits the panel and one that directly interrupts the mag lock power.

Granted, herculite doors are a pain - make it an in/out swing with a shear lock and have even more fun.