I have seen the Axis A1001 claim they are built ONVIF Profile C compliant: 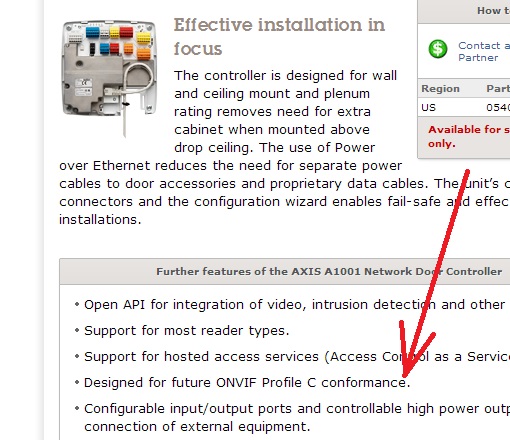 Axis explained 'future ONVIF Profile C conformance' means it is compliant when Profile C is released, which is this week, like the OP notes.

Actually you can now search for Profile C compliant products. The A1001 is the first and only.

Is the future of profile C as dim as it seems.......I don't see many manufacturers discussing plans of future releases...if they are out there I missed them.

I think there's a number of factors at play here:

1) ONVIF Profile C is very early, and isn't much of a factor in buying or specifications. It is essentially brand new.

2) ONVIF means something to the video market, but not access control. It is not surprising to see a founding member of ONVIF be the first to release a Profile C product.

3) In speaking with access manufacturers about the future of Profile C, they told me "We will build products however the customers demand them built" meaning Profile C becomes relevant when the market decides it is important. I understand there have been similar 'interoperability' standards in the past within the ranks of access that have sputtered and faded.

4) Mercury Security has a huge 'defacto advantage' over ONVIF C interoperability with their standard firmware. There are examples of non-Mercury hardware running Mercury firmware that make this clear.

5) As a market, Access moves more slowly than Video. Adoption of ONVIF C may take some time because the turnover of systems are much slower than surveillance.

What about Mercury / SIA's OSDP?

OSDP is a protocol between controllers and peripheral devies like card readers, where ONVIF C is between the controller and a host/client. Not sure the analogy applies.

This site being IP "VIDEO" Market info, everyone has a good understanding about ONVIF in the video context. You can use ONVIF to communicate with cameras. You can also use ONVIF to comunicate with VMS's from other software. Correct me if I'm wrong, but it seems to me that ONVIF support actually used in operation is almost entirely the talking-to-the-camera variety, and not so much the 3rd party software talking-to-VMS part. Thus the following statement:

Much of the conversation about "why Access Control is so far 'behind' Video in terms of open standards", fails to appreciate this. ONVIF for cameras has been very successful because cameras are much more of a (...wait for it...) a comodity than VMS's are. What a camera does is more limited and easier to conform into a standard. In contrast, the VMS is where most of the value is added and where systems vendors have more freedom to differentiate, and as such, ONVIF has less traction at that level. How many integrated systems like OnGuard, C-CURE, etc., use ONVIF to talk to the VMS instead of the VMS's SDK?

Similarly, the Control Panel (or whatever provides the controlling logic), is where the value is added in an access control system. The reader/door-position/strike is, in and of itself, much more simply defined in what it does. OSDP is an appropriate standard at that level, as was weigand in the past. However, it is much harder to standardize that what the controller does, just as it is with what VMS's do, yet that seems to be the goal of ONVIF C.

To sum it up, ONVIF C, as an "open" alternative to controller protocols, will have about as much success as ONVIF S & G have as an alternative to VMS companies' SDKs: not much. If ONVIF C were appropriate for the Controller-to-reader communications, which it is not, it would compete with OSDP's giant head start.

Where ONVIF C and PSIA's Area Control profiles will find success is in data sharing between similar devices like climate-control systems, as well as global I/O, global anti-passback, etc., but for host-to-controller communications, I suspect SDKs will rule the day for a long time to come.

"What a camera does is more limited and easier to conform into a standard. In contrast, the VMS is where most of the value is added and where systems vendors have more freedom to differentiate, and as such, ONVIF has less traction at that level."

I disagree that this is primarily a technical issue.

The big barrier for standards connecting VMSes 'out' vs cameras 'out' is that camera companies have always been motivated to have as many people as possible support their cameras, whereas recorders are much more concerned about losing business when others 'support' / integrate with them.

Take Milestone or Genetec (covered in Recorders Integrating with Other Recorders), they have strong motivations not to allow anyone and everyone to integrate with them, especially each other, because each will use this to displace the other in accounts. That has always been the big barrier to standards for these companies - the fact that the big players seem 'open' standards as against their business interests.

I was not implying that it was a primarily a technical issue.

No company will would willfully commoditze its own products, unless the volumes to be gained are absolutely enormous, and you have no problem competing largely on price. Thus the benefit of supporting ONVIF for a new, low-cost camera manufacturer are obvious. In contrast, a VMS is largely a software product, usually developed in a high-cost locale, volumes lower than cameras by definition, and the vendor generally cannot compete on solely on price. They can't make money by marking up commodity cameras, so they must differentiate in their VMS products. Is the VMS company going to push a standard, on its own accord, that makes its product interchangable with its competitors? Doubtful. They only respond to market forces. The market wants choices, but they also want products to work (related: Steve Jobs, Apple, et.al.)

There will always be a balance between tight integration and interoperability. Axis and Exacq both support and champion ONVIF, but every Axis camera I add to my ExacqVision box seems to use VAPIX by default. That tells you something right there.