Linux Vs Window Based NVR

What OS do you prefer for VMS, Linux or Windows? Are there many differences especially regarding performance?

In general, I think it's more important to decide based on VMS functionality and ease of use, before limiting choices based on OS.

For example, most VMS software runs only on Windows, so requiring Linux would knock out ~90% of VMSes immediately (including Milestone XProtect, Genetec, Avigilon, OnSSI, etc., etc.).

Regarding performance, it is hard to test specifically since most VMSes don't support Linux, but we have heard some anecdotes of Exacq (one of the few to run on Windows and Linux) running somewhat faster on Linux.

I think if Linux vs Windows were really an issue (and I agree that the OS should not be the primary consideration), I'm not sure that performance would be much of a differentiator. And any OS-based difference would be overshadowed by (or could be easily compensated with) the PC hardware itself.

I've always thought of the advantage of Linux for these kinds of systems was in creating an appliance which does not require OS-level administration.

However the market has pretty clearly shown that the OS is not a critical factor in the success of these products, despite all the hoopla about total cost of ownership, security, etc etc in years past. The fact is so many organizations have a Windows infrastructure so incorporating yet another Windows box or software application is just normal.

If an IP camera ran Windows instead of Linux I think engineers would think that was funny but I don't think the market would care as long as it worked well.

That just reminded me, there was an IP camera that claimed to be running windows, maybe 2 years ago. It won some "best of" award, IIRC, even though it wasn't even shipping yet and had no significant novelty over a "normal" IP camera. Haven't heard anything about it since then.

That was ISD - The First Windows Based IP Camera - Genius or Crazy?

ISD was acquired by Digital Watchdog earlier this year. They say they still have plans for the Windows camera. I wouldn't hold my breath.

Sony also had cameras that ran on Windows CE I think, mostly for custom and machine vision use.

Which one specifically? Here is Sony's list of IP cameras.

Looks like since last time I looked they switched from Windows CE to Windows XPe, which I've never seen that description before but I assume is Windows XP Embedded.

You have to click on the camera, then "Resources" then look at the Description PDF and you'll see XPe listed as the onboard OS.

If you want ease of use with something that most people are familiar with then definitely use Windows. You can install other software such as camera setup utilities that aren't available for Linux. Also it is much easier to remotely access the desktop through software like Logmenin that isn't available for Linux either. The Windows OS is just easier to manage for us since everybody is already familiar with it. How many techs out there are familiar with opening up terminal and doing programming manually? Simple things in Windows are tedious on a Linux machine.

The only time we use Linux is when we need to go on the cheap and use a low powered Linux box. I guess the OS has less overhead and can run better on low powered hardware saving money on the processor and also the OS which is free. As for stability I would imagine Linux to be more stable of the 2 but in reality I have dozens of systems out there on each platform and they seem equally stable. As for performance, Exacq's website shows better performance in storing the video but lesser performance in displaying it on machines with equal hardware.

Not much really. Only on the small projects where you have to go bare bones will it make an impact. If you really want to go cheap buy an off the shelf PC and go with a software only solution and call it a day.

It will make this difference:

Win 7 Professional costs $150 to the manufacturer.

Manufacturer margins are typically 50% (or sometimes more) = now it's $300

The choice of Windows versus Linux is now $476 to the end-user.

It doesn't really matter on a $10,000 server but it makes all the difference in the world for a small server used in residential applications.

No manufacturer pays $150 for Win7ProOEM. Hell, I can buy a single copy for >$130 on Amazon. If you buy through distribution (Ingram, TechData, MA) you can buy multi-packs (3,10,25,etc) for less than the $130 Amazon sells for. I used to work for a small PC company. We built about 300 PC's per day. We usually paid around $100 per Pro license. I cannot imagine the Dell's and HP's of the world come close to paying that much.

For just a few dollars more than that if you are on the cheap it would make sense to just buy a $500 PC and put your own 4TB drive in it and install some licenses...done!

It's crazy but I have people that just started small and simple but added cameras along the way who are running 12-20 and one almost 30 cameras on a cheap COTS PC. Amazingly enough they are running pretty trouble free. My typical call is internet loss.

The one that the clients IT department supports.

I believe that Linux is faster at storing data, but is not so good at displaying video. When using servers in the comms room and clients out in the field, this would be fine. But running the client and server on the same PC would see some limitation in display FPS.

"Linux is faster at storing data, but is not so good at displaying video."

G, what is your basis for this sweeping generalization?

Hi John, I was also looking at Linux vs Windows previously for my company. One of the performace differances I noticed was its ability to store more FPS than windows, but display less FPS on a local monitor compared to the windows servers.

In the example of ExacqVision the server stores; Windows 350FPS vs Linux 550FPS, but yet when it came to displaying the images on a local monitor, Windows 1200FPS vs Linux 700FPS.

In other areas of my work I have also noticed that Windows and display drivers / graphics cards are much better at video rendering compared to that of Linux.

Again, this is just my belief and opinion only. I'd like to hear what others think of Linux and displays & video processing.

I have to disagree with you- the information you provide is not correct. This is a screen capture of our exacq office server. If you are able to see closely, it shows 41 IP cameras (there are an additional 7 that are also there but would not fit into my screen capture) being recorded on a Windows 7 Pro Exacq server and it also shows 695 FPS being recorded (and there is another 140 FPS being recorded for those 7 cameras that wouldn't fit...): 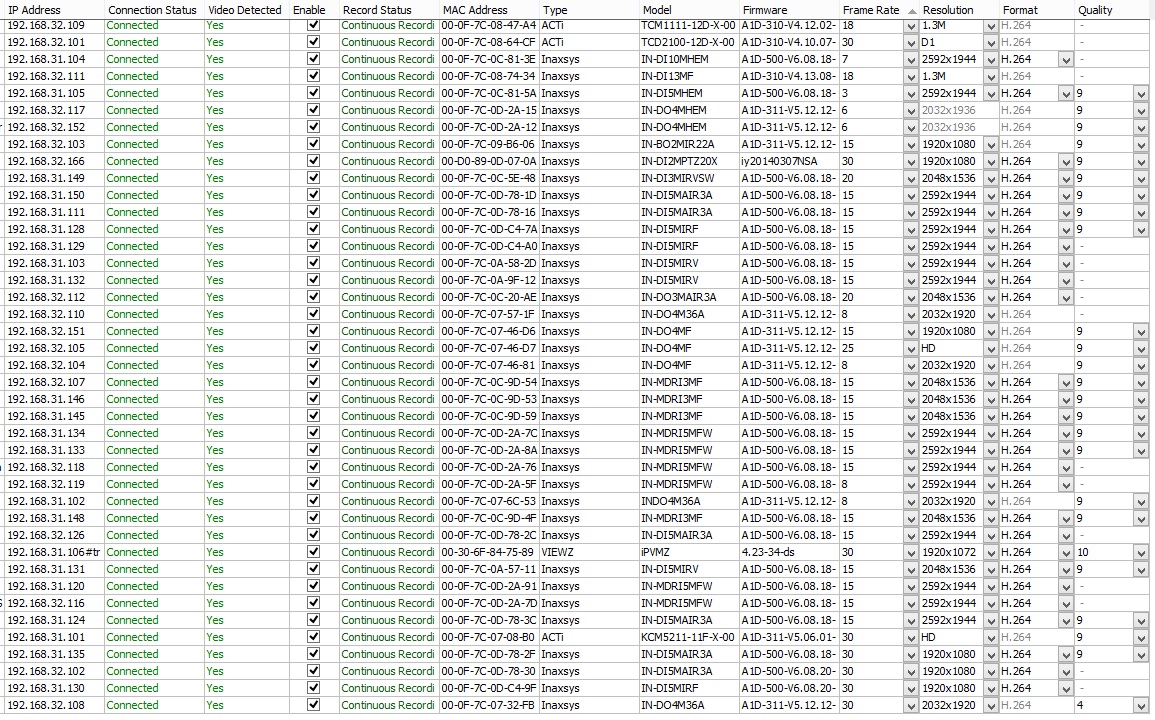 I think you're mixing up FPS and Mbps

Can't one OS have better driverers for one thing but not on other thing?

Here is feedback from Exacq confirming this:

That probably goes back to Linux development traditionally being stronger on the server use side than on the desktop use side. Graphics drivers for Linux developed and tuned to the performance level Windows and to a lesser extent Mac has always been a common complaint of the Linux community.

Another question, in case of public bidding , if Company A proposed a windows based solution while Company B offered Linux based , do Company B already have an upperhand (much lower cost) ?

Most windows require higher specs while linux can run smoothly on a lower specs. am i right?

In case of public bidding, if it just says '8 channel NVR record video at 1080p with 4TB' and nothing else, it is going to go to the lowest consumer / prosumer product on the market.