How To Mount Multiple Cameras On A Single Pole?

NOTICE: This comment was moved from an existing discussion: Super High MP Cameras Like Avigilon Or Multiple Mp Cameras?

Without an image of the mounting area, I am just going to take liberty to visualize this install in my head. Feel free to counter with more details if my minds eye is different from reality.

I am imagining these being mounted on the wall of a building, but above the roof decking. I would install two parallel pieces of unistrut horizontally to span wall studs. Then using pipe clamps, fasten a piece of rigid pipe, or large diameter EMT. From there, you can attach the cameras using a pole mount for each. They would be at staggered heights. You can use the inside of the pipe for wire management and drill holes in the pipe for wire penetration just below each camera mounting position. 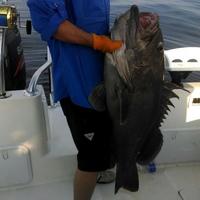 Go to your local Warmart and observe there installation. I saw 4 Cameras mounted on a pole and roof with with what looked to be Pelco mounts: Pelco Security Cameras and Surveillance Systems

The customer did not want it to look like WalMart - so we came up with this..... The goal was to blend into the sight line of the roof as best as possible and push out far enough to look back into the entrance and yet see the parking lot. We had to roof mount, pentrating the wall at this spot was not possible. The mount is a non-penterating roof mount satellite antenna base. 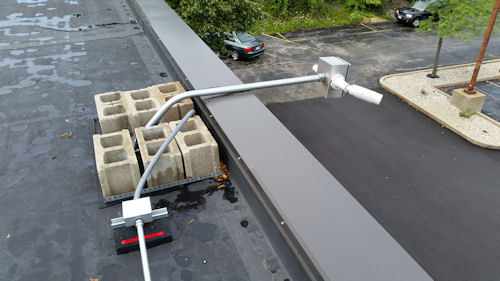 And it swings up for service.

From the Ground it looks OK. 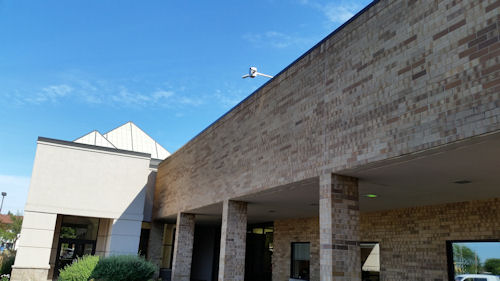 How does it swing up for service, yet remain steady in the wind?

It's a satellite base - so there is an adjustment plate for angle. The pipe is a standard conduit, bent to our angle and then a bolt goes through the original adjument plate and through the pipe. Pull (or loosen) the anchor pin (bolt) and swing it up. All stainless steel hardware and box. Galvanized IMC conduit. The flex enters the pipe through a slot on the bottom and up the pipe a bit. 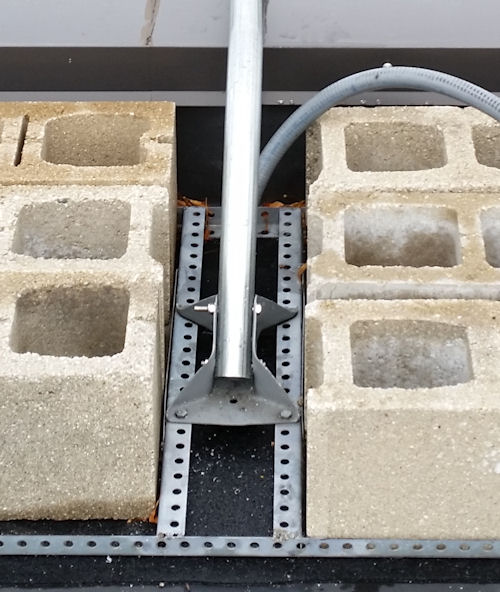 Is there a swivel bolt at the base like this, but with the mast folded down?

Is the parapet bearing any load?

That's it. Sure there is some load on the parapet, but not that much, as the entire camera assembly isn't that heavy. We made a custom pipe to move the bend to the required spot and lengthen the pipe - to push the cameras out further from the building to look into the entry as much as we could.

And to answer below - as reported above, we needed to push the cameras away from the building to see the entry and cover the parking lot at the same time. We also could not get access to the wall or under soffit to get cable to it under 300 ft. This was the most cost effective method of achieving the end goal. The box was also designed, and cable installed, to add a third camera on the face of the box, if needed.

Another lesson learned - as John has pointed out in his lessons - we try hard not to flat mount dome cameras on the outside walls. We install an arm to allow the camera to hang. Less light issues with blinding from the sun and water sheds better. The smaller domes makes water droplets bigger in the field of view. 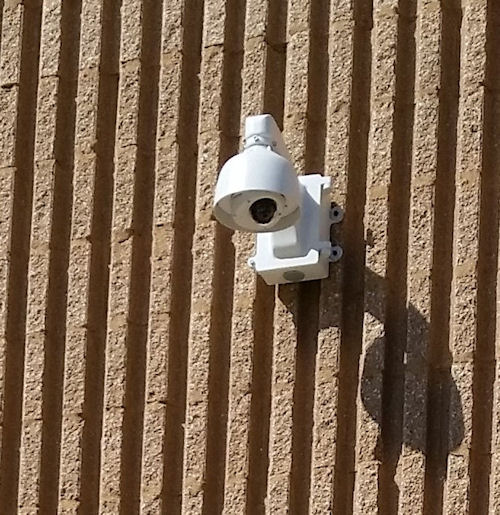 We have been having similar questions since going to fixed IP cameras. This is one of our most recent pole designs. 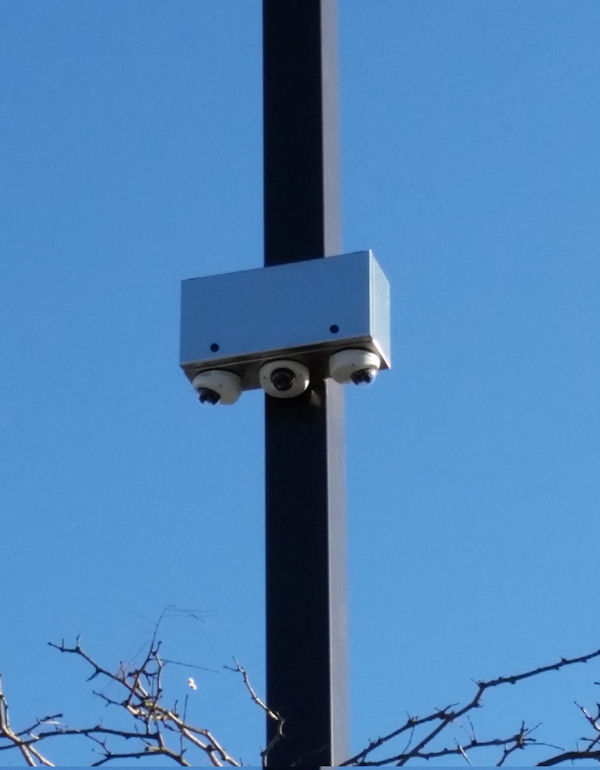 These are GeoVision MDR3200 3Mp - 110 degree FoV and look around the pole nicely. It is what the customer wanted. It turned out as designed. Inside the stainless steel box are three coax to Cat5 converters. The poles are more than 300 feet from the building and the customer did not want to spend the money on fiber.

Is there a reason why you didn't just mount some domes either on the brick face or under the soffit?

Thanks for the replies People! Please keep them coming

About the last mpunt with the Geovision .. How did you deal with the Heat. Last time we put converters outside in a box they didn't last long?

We generally use NVT devices and have been having good luck with them. They go in and work. I don't recall any issues with heat. When there is a problem - it's with water. Corrosion on PoE network connectors, BNCs, circuit boards. Be very sure nothing sits on the floor of the box. Water will get there at some point. Always suspend connectors and electronics in mid air as best as possible. Rubber ( 3M 23 ) waterproof tape. But water appears to wick along the cable and still corrodes the connectors when there is any voltage on the cable.

We normally try to mount the electronics at the base of the pole. But this was a retrofit in a not so nice area.