How Do You Set Up Cameras In Trains?

A member is asking about the logistics / implementation issues of putting cameras inside trains. I have no experience with this and am wondering / hoping some of you do.

For instance, do you run cabling across the train cars for the various cameras to a single recorder? Who watches the video? Anyone inside the train? How about connecting back to a monitoring station?

Any experiences or insights would be appreciated.

This document from the Association of Train Operating Companies (ATOC) provides quite a bit of guidance and best practices for dvr and camera placement, tho its technology sections are not SOA.

Interesting find and there are some interesting requirements from this document. Like the chart below showing if they want images good enough to recognize vs. observe in certain areas. 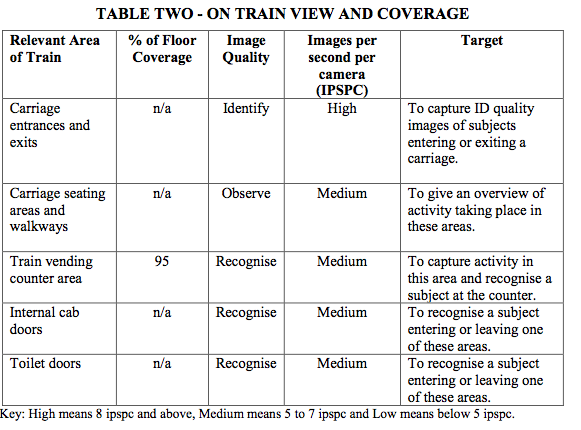 And some of their suggestions:

"Camera Lenses will need to be tested in a unit. It is likely that 16mm or 12 mm focal length will provide the optimum field of view. Arrow heads indicate the centre of each camera field of view. Focus rings must be capable of locking to combat vibration." That suggestion was provided with this diagram of "optimal" camera placement in a train car.

For a US reference, I would use APTA as a guide even it id does read like it's a bit dated.

In regards to communication, it depends on the type of train; whether it is heavy rail, light rail (LRV), or airport people mover (APM). In LRVs or APMs, most of the time the communication for control systems between cars is a 10MB link within the couplers. It's normally reserved for train control systems (propulsion, brakes, doors, etc.). Most of the comms I see are 802.11 from car to car and car to wayside.

For car to car, if the system is designed so that the cars are a single entity, then it is likely one DVR/NVR. In this scenario, moving cars between trains is not a common occurrence. If it is, they may have a system like Moxa or Belden where their wireless can "see" when it's connected to a new train. On heavy rail where the cars are normally longer and more interchanged, I would assume each car has its own DVR/NVR.

For car to wayside, it can be 802.11 or cellular. In a subway tunnel, they may have 802.11 available for internal (as in internal to the transit authority) for comms the cars for CBTC, Passenger Information Systems, CCTV, etc. If these are LRVs are roaming around the city or countryside, it could be compressed and encrypted over WiMax or cellular. There are several vendors for providing this specific purpose for CCTV.

Note: 802.11 available to passengers is normally, and should be, a completely separate network.

For viewing, most of it is just recording; I doubt anyone is doing any live viewing. The driver shouldn't be (they're driving a train for goodness sake). I suppose it depends on the size of the system, but with a few hundred trains I doubt it. It fairly similar to bus transit systems where it's recording all the time and used as a reference if there is an incident. They may offload video incidents when pulling into the yard or during station stops via 802.11.

As far as application of the cameras goes, I’ve seen everything from two cameras to fourteen in a small train car. Internally if there is a fair collection box use a higher MP camera to catch faces, details, and money handling. The next important location is the doors, watching people load and unload the cars. Looking for people falling and tripping is common. On the rest of the interior, it’s normally a setup similar to busses, a couple facing rear and a couple facing forward. If the train is above ground, it’s wise to mount cameras on the exterior on the sides, as well as front and rear facing.

Like busses, above ground trains are roving security systems, able to record traffic and other events. In some cities, they use the front/rear cameras as lane control too. Where lanes are specific for busses and LRVs and other vehicles should not be in them.

Cameras should be vandal resistant and NEMA IP rated (IP rating depending on the installation location and city/state requirements for transit). Many transit agencies also require certifications such as EN50155 and EN50121 for shock, vibration and high/low temperatures.

This is my industry. I can tell you we have one camera monitoring through the windshields out front. All self contained in a box.

I don't want to say too much more due to possible security issues.

I think the biggest question is what are you trying to achieve with the cameras? That will tell you a lot about the type and scope of the solution that needs to be deployed.