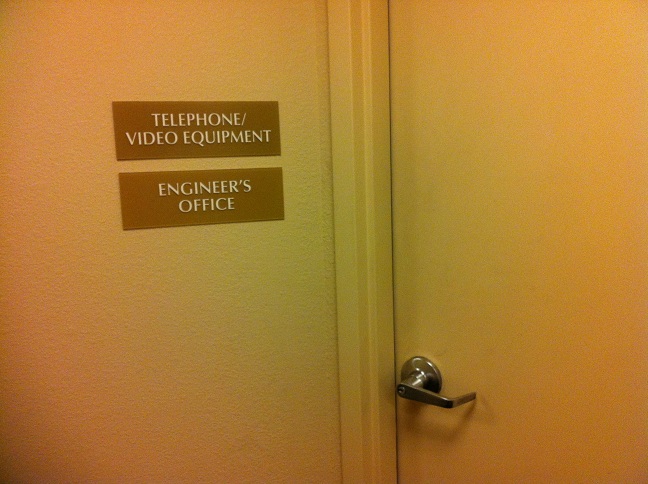 It's a good thing to discuss. I'll play devil's advocate.

Just because an intruder knows the video equipment is in a room, does not help them that much. They still likely need to break in and then, who knows, maybe the recorder is in a lockbox.

How often is that a practical problem? Versus how many times does it help employees or service people?

Btw, if this is a hotel, the 'video equipment' may reference to the TV, not the surveillance.

John, you clearly haven't watched enough TV. It's in rooms of this type that the burglar cuts into the coax and inserts the device that broadcasts a 'repeating" image from a camera, so that the security guard can't see him breaking into the safe. :)

Seriously though, I do advise my clients not to identify the locations of the rooms that contain critical building infrastructure, including mechanical rooms, electrical rooms, IDF/MDF closets, server rooms, etc. The thinking is that the people who need to use these rooms should know where they are, so why take the risk of advertising their location to everyone else?

This type of precaution obviously won't stop a determined attacker, but it's often the dozens of little things that you do that provide the best security.

But what is the logic behind having such obvious labeling displayed right next to specific doors rather than just a number (or nothing at all)? How new of an employee do you have to be to need that sign if you are looking for that room? If they need service from outside companies techs, do they just point them in the general direction and say "you can't miss it"?

I can think of no reason - other than someone bought themselves a sign-maker.

At a minimum, it can draw the curiosity of someone who may not have had specific bad intentions until they read the sign and started thinking...?

On new construction projects, signs of this type are often provided by the general contractor as part of a comprehensive signage system for the building. Typically, the architect gives every room a name and room number and this is what goes on the sign.

I figured the FAIL was sticking the engineer in the same room as all the comm/surveillance equipment. "Idle hands do the devil's work."

Personally, as someone doing a lot of site maintenance calls, I appreciate when rooms are labeled. It saves me having to open multiple doors to find equipment locations or junction points I may need to troubleshoot.

If this hotel is the Waldorf Astoria, I get the concern. If it's Motel6, not so much...