Help With Network Design On A Single Location, 2400 Camera Project.

We will start soon on a 2400 camera project at a single location and would like to get feedback from other members with similar experience for best practices. Camera will be spread out across multiple buildings located in the same complex. Every building will have about 240 cameras and a dedicated fiber pair for cameras.

1- VPN: Since all the packets are video and we are on a dedicated pair, are their any advantages to create a VPN for the cameras?

2- IP Scheme: What IP scheme/Subnet would you recommend? Do you recommend creating a subnet for every building or maybe for every server? I was thinking 255.255.240.0. That will open up about 4000 hosts.

I look forward to your feedback. 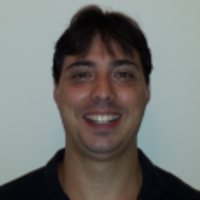 That is a big project

1 - Unless there is a requirement to encrypt the video, no advantages (Keep it as simple as possible.)

2 - 10.23.61.0/19 for the network domain, and then VLSM to sixteen /23s (510 hosts per building [plenty room to grow]) for each building and utilize VLANs and layer 3 routing. The head-end would require a multi-layer switch; avoid routing protocols, static routing should suffice (Remember, keep it simple). I would avoid a single broadcast domain at all costs for a network this size.

I assumed that all the cameras would terminate back to a switch in a star configuration, yes; however, the backbone of the network can be any design you want it to be. A ring design would be a design to consider for redundancy if that is a requirement; if not you are just adding an additional cost. You did not give much detail on the network, so assumptions were made.

A ring design would be a design to consider for redundancy if that is a requirement; if not you are just adding an additional cost.

Can't there be topologies in which the physical location of the buildings make a fiber ring less costly in cabling and trenching etc?

I don't know, you tell me; I would think it highly depends on the requirements of the job.

Sure. The OP says multiple buildings in the same complex. Depending on the exact number and location of the buildings, it can be cheaper to run a fiber ring, as opposed to multiple home-runs.

MANs and CANs are often this topology

The way you would propose doing it I think is solid, but it does have the drawback of requiring TCP/IP routing at every building, which depending on the number of hops, might build up a decent amount of latency, as well as require high capacity/high end routing gear.

And in a ring config, you would only be sequentially routing to your neighbor...

Different switch providers have their own propreitery ring protocols currently and problems with broadcast storms etc, for larger rings, this must be solved with vendor specific STP like fixes.

Still I think there are good reasons, besides redundancy, esp. In Campus settings for ring topologies.

Sure. The OP says multiple buildings in the same complex. Depending on the exact number and location of the buildings, it can be cheaper to run a fiber ring, as opposed to multiple home-runs.

The number of buildings are 10 (2400/240); Ethernet and STP with 7-hop maximum dimension of spanning tree on a ring that has 10 hops would probably not function very well during re-convergence on a link that was detected as down (Not tested); you could try and implement RSTP and just change some of the settings (Again not tested), would probably work with no issues on a 10 hop network; however, that is not what RSTP was designed to do.

The fact that the customer is using IP cameras, I would also assume that the cameras are at least 2MP, which would equate to ~1Gbps per 240 cameras, 10 switches, aggregate bandwidth would be about 10Gbps. So, there is much more information that is required to agree on what would be the best topology.

So, there is much more information that is required to agree on what would be the best topology.

Sorry, I didn't get that out of your first reply:

A ring design would be a design to consider for redundancy if that is a requirement; if not you are just adding an additional cost.

which seemed dismissive of ring topologies except for the purposes of redundancy.

For this size of project you wiill require an stratergy of deployment. My advice to use different subtnets per building or warehouse, since it will easy the maintainance and deployment.

Regarding physical deployment, I use to work with a topology mix of ring (for interconnecting building/warehouse) and star for last-mille distribution whithin a building or warehouse. (if its complex)

You will need to use Managment switch's with STP (for closing redundancy loops such as rings) and SNMP if you plan to monitor status of network.

Just out of curiosity, what VMS are you going to use on this project?

Hello There, you can also reach out to Pelco's Expert Services to review our offering. We have network field technicians that can assist you from Pre to Post Sales Support. Once you have a strong network foundation, the system will be running smoothly. Our goal is to make sure you succeed with your customer!

Why don't you store in multiple buildings? The choice would be based on amount of storage/duration, number of simultaneous viewers, location/distribution of viewers, security of storage and ease of running fiber. If only a few cameras are being viewed simultaneously, local storage provides some distributed redundancy, but requires multiple support systems like UPSs.