There are so many variables for appropriate door hardware, it makes sense that there are still specialized companies to provide and design door hardware. Of course there are cases as integrators (which I am) where there is an existing facility and we are asked to secure that one particular door that stumps us. My current specialty door is a commercial sliding glass door (See picture below). The door operated as the previous owner dictated via PIR sensor, automatically. My recommendation to the new facility owner was to allow the ACS to override the PIR control point to limit access to authorized personnel and keep the added benefit of creating auto unlock schedules for normal operation when desired. The new owner has decided that this is not secure enough and wants a hard locking solution. The only possible thing I have been able to come up with so far is mag locks on Z brackets and have 2 stage override so that the door did not activate with a motor pulling while the mag is holding (messy, messy). I am hoping that someone out there has come across this issue and come up with a more elegant solution. Any advise and knowledge is welcomed!! 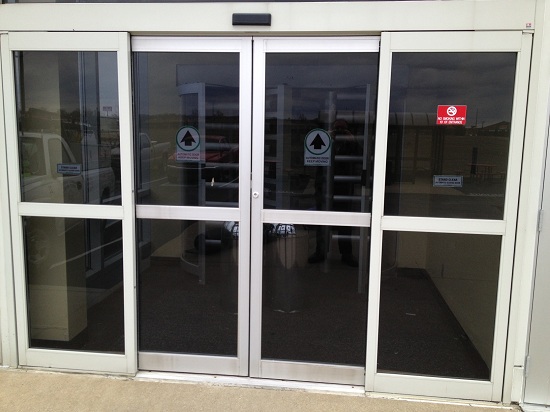 Michael and Velayuthan, thank you both for your responses. Sorry for the delay as I have taken a bit of a vacation and am not technically supposed to be doing anything "work" related, so please do not tell!!

My regional program manager was/is checking with the manufacturer for retro options, but I think that the end user will look for us to provide a "solution" (please note this is a loosly provided term) as our initial recomendation was that the door be changed out altogether and they did not want to even know the possible cost involved. Shear locks are not really an option and while I have reviewed e-bolts, these would be tricky and have to be cut into the entrance flooring and not sure that cutting into this flooring and then patch/fix is going to safe them a ton.

I have not had the opp to hold or look at hook locks before. I downloaded the manual, but need more time to review how such a device would be installed (unless of course you could give me cheat sheet guidance;-)

what about Trimec Hook Lock instead of Mag lock?

Some of the newer automatic door operators can be ordered with a "security" option that provides postive locking of the sliding door leafs. If you haven't done so already, I would suggest contacting the door manufacturer to see what (if any) retrofit options they might suggest.

I would be very careful about adding shear locks or electric bolts to these doors. These doors are much more complicated than they first appear and making modifications (such as adding a little extra weight) can have long-term implications that you might never imagine. Also, most doors of this type have "break-away" leafs that allow the door to be used as an emergency exit - the door can be pushed open when locked. Be sure that any modifications that you make don't interfere with this ability.

Thanks for that link. I am a bit jealous of them because they are discussing deployment of a single slider and can think of sheerlock and electronic bolt options!! Thanks for your input on here and I am hoping for some more reposnses!! Either way, I will make sure to let you know how it ended up with photos and operational parameters.

I feel for you, because I'm not sure there's a convienient answer. Sliding glass doors are created to permit access as easily as possible, not high security. As such, I'm not sure there is a 'off the shelf' piece of hardware that meets the need. If you have model numbers on the operator, we can take a look to see what the manufacturer recommends, but that's a long shot.

Many retailers with sliders install an overhead rolling gate or grille behind the slider for security during off-hours. That does not sound like much of an option here, but maybe someone else has a novel idea.

Lori Greene (IR: Codes) recently had a similar question posed on her blog, and the best answer among AHCs/ Door Hardware people seemed to be the very solution you've already arrived at: maglocks and armature plates. (See: HELP! Access Control on Sliding Doors)

Good luck! I'm as interested as you to see what responses come in.

Good eye. There is a turnstile and ADA door inside that we had in our initial plans for secure access. The risk management group for the end user has decided that this was not enough, hence trying to tame this beast. Due to type of work being performed in the facility and positioning of security staffing we are in a "no other option" scenario as dictated by the end user. I fought this deployment for a week and a half and finally JUST lost out. You are going through the same mental patterns that I had battled (staring with anything but that door!!).

I am confident that I can make the mag lock scenario work just fine, it just feels Macgyver-esque. As specialized as door hardware has gotten I thought surely there would be a developed product for this.

Also: it looks like turnstiles are located inside the door? Is the owner still concerned about a positive lock on the outside slider when the inside is access only by turnstile?

The way that slider is made, you can push on the stationary sections and swing them out for egress in an emergency. While that's great for life safety, it makes securing the sliding leafs more difficult.

You might be able to rig up something like a top mounted electronic deadbolt that prevents the sliders from moving back when the bolt is extended; but then again, you might not depending on the make of the slider.

The door was tested with the PIR disable and could be pried. This was not an acceptable solution for the end user. So the push is to have a more rigid, controllable locking solution.

Understood and agree on the holding the door shut with mag engaged. The plan is to provide a secondary output (inline with PIR contact) for override of PIR control. Plan is to use 60ms delay from link to access granted event on the entry side. The exit side will include much of the same with the exception that PIR will be reallocated to ACS terminated as REX and contract for control will be provided via additional relay with 60ms delay from link to REX.

I feel pretty comfortable with the deployment, I am really hoping that there is an electronic locking device for these door types that I have not been able to find.

The easiest thing to do is control the outside PIR so it is turned off during certain times, and then lock it with a maglock.

Any idea of what make/model the sliding door operator is? In some cases the controller is built for inputs from an access control system.

Failing that, can you connect a relay inline with the PIR power? During a certain time, the relay can always make contact, but the PIR can be left unpowered during a specific schedule. You can use a door controller to lock/unlock the relay on a schedule, just as if it were a lock. THe right relay could alternate between firing a maglock and releasing it and turning on power to the PIR (DPDT).

On the point about using a maglock to hold the door shut even when it pulls open: You are 100% right! Do not do that!!! You'll bend or break the door, frame, motor, and armature of the maglock! That would be a very expensive door!