The investigative team news station in Arizona is asking for the public's help in identifying what kind of camera/setup this hidden in a "high voltage" box. The police and the city haven't responded to any of their questions about the camera after it went up recently in one neighborhood. I have no idea, but it looks like one I've seen before that only takes photos that DC uses for stop sign enforcement. Below it looks to be IR illuminators. The high voltage box is the same one police at Secured Cities said they use for covert surveillance of drug dealers (except the window on theirs is tinted). There are also other similarities to undercover operations too like having fake utilities workers install them, etc. -- They do that same thing with undercover cameras in Chicago. 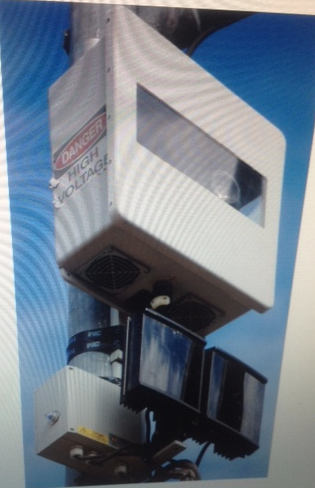 Any security experts who can look at/analyze a surveillance camera for me for a news story tonight?

I talked with her and asked her if she'd give me a photo I could post on here for IPVM discuss. Anyway, if you live in Arizona and you're looking for your 15 minutes of fame, shoot her a tweet. And post your thoughts here too because I'm curious as well.

This looks like a pretty expensive setup so whomever put it up has real money to do this. I am guessing police.

There's not really much to go on with that photo.

All you can see is, what appears to be, the lens and it's IR and that's about it.
Perhaps they mounted an mini-dome inside that casing to make it look less obvious.

Got an email last night that says, "The illuminator is definitely a RayTec unit."

Ok this definitely just got more interesting. The utility company has admitted to installing the camera. Here is the statement it gave local media:

"This was a unique situation. In coordination with the city and local law enforcement, we placed the camera to provide an extra level of home security for an APS employee who had legitimate concern for the safety of his family. The camera focused solely on the employee's residence. No other properties were in view."

The camera has since been removed.