Eastern CCTV Vs Dahua And Hikvision

Here's what I've discovered. Their pricing is good, but the products come with no brand labeling so I never know who the manufacturer is. Many of the products have no spec sheets, other than the brief description in their catalog, so I don't know exactly what I would receive. Most of the products can be demo'd for 30 days. Technical support is very helpful and knowledgeable, unlike the sales department which didn't seem to know much about their products.

Before investing further time and money with this company, I would like to know what others have experienced.

Is it this Eastern CCTV? 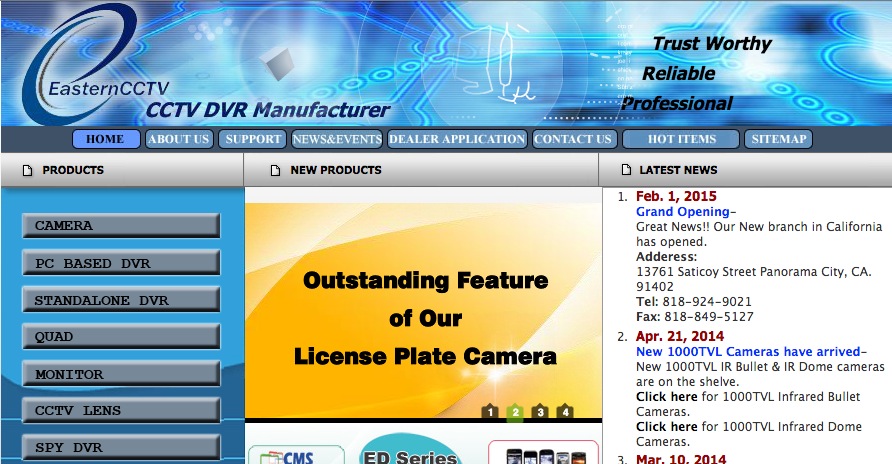 It appears they import various hardware from China and re-sell it in the US.

Have you considered any of the major 'real' manufacturer for low-cost products - companies like ACTi, Dahua, Hikvision, Vivotek, etc.?

Yes, the website you show is the company I referred to in my inquiry. They say that most all their products come from Dahua, Hikvision, and another source, which I don't remember. Their pricing is very good, and that was a big draw for me. Plus, they include a two-year warranty. It's just that I don't feel comfortable with the lack of information on their products. Some of their equipment's specs can be downloaded, but much of what they sell has only a few lines in their catalog, or online. So, I was hoping to find out what others have experienced.

It's significantly less money than from Hikvision directly?

From integrator surveys, we have done, we rarely, if ever hear them mentioned. That does not mean they guarantee they are bad, but it's not a great sign.

Jon, it's www.easterncctv.com Low prices but questionable products since they are not labeled with any manufacturer's name, only a part number. So you never know where it came from. They say they do a lot of professional and contractor business, but I'd like to hear from some other installer/dealers before I get involved.

I think Jon's question was more of a rhetorical statement. Jon has a lot of experience with Dahua and Hikvision products, so I am guessing his point is that, despite his experience, he has never heard of Eastern.

Another integrator member has heard of them and was "most likely" going to use them. He has a website that appears to sell rebranded Dahua. Perhaps he might be worth contacting?

I've dealt with EasternCCTV in the past - the last big analog jobs we did, we purched a number of these and these and these from them. Makes life very convenient when you have a mix of large numbers of IP and analog - run UTP everywhere, terminate it all in a patchbay, RJ45 plug at the camera end, and if you ever replace an analog camera with IP, it's a simple matter of swapping the camera and re-patching the head-end from the VPS into a switch.

As for the company, I can say we always got amazing pricing and service from them... particularly from Annie at their west coast office. I'm almost a little sad that we're pretty much exclusively IP now for new installs and upgrades, because I don't get to chat with her any more. If they have the pricing you like, I'd say go ahead and deal with them with no concerns.

For our HIKvision and Dahua stuff, we get it from Nelly's Security out of Tulsa - I've "known" Sean since he first logged into CCTV Forum looking to sell a pallet full of used gear he got from some abandoned warehouse or something and started up Nelly's Surplus :) If we hadn't already been buying Dahua from him (under his "EYEsurv" label) when Eastern started carrying it, we'd probably be getting it from Eastern now, but Sean has also always provided outstanding pre- and post-sale service, and AFAIK is still very selective about the specific models he sells, testing them all before deciding to carry a particular line, so we've stayed loyal to him.

Overall, I'd recommend either one, based on my own experience.

Sean Is an amazing guy in a world full of shysters. It's very hard to find a reliable guy that will take your call and resolve any issues you have. He is a great resource and I would recommend his company and products 10 out of 10 times!