Like many stores in the American south, a Home Depot in Bluffton, South Carolina has a resident cat. The cat, named Depot, has lived in the store for 13 years, but now management says he has to go. "Home Depot officials say she's becoming a problem because she sets off the alarms," WTOC reports.

Some of the comments from the locals:

"Depot is too old to be put out of her home....the ONLY home she has ever known!"

"This is where she is use[d] to living. All they would have to do is put her in a[n] office at night time if they are worried about alarms."

"Tripping off the alarm is costly to the company, unfortunately. Unless you know of some way to limit a cat from doing so, they don't really have a choice. They can't have her constantly tripping alarms every night."

"Because there's nothing like being the on-call assistant store manager who gets awakened from a sound sleep by a phone call from the alarm company or the police wanting you to trek down to the store, in any weather, just to do a walk-through, because the cat set off the motion sensors."

"Every home depot down here in Cali seems to have flock of birds living inside of it."

So let's say you are management or an alarm company, what would you suggest in this situation?

This seems like an easy problem to fix without booting the cat.

Motion Sensors with Pet Immunity are common in residential applications, tuned so that masses of <50 pounds do not set off alarms. Granted, those sensors are typically mounted 7' - 10' above the floor in a house, not 18' - 25' above pallet racks in a warehouse.

The point about birds is a good one, but birds typically fly around near the roof deck - not low enough to trip motion sensors focused on ground movement.

I doubt getting rid of the cat ends the circumstance of waking up 'on-call' manager due to false alarms. With many sensors all over that warehouse, the FA rate is still going to be very high due to weather, swinging display decorations, and faulty PIRs.

I agree. Pet Immune detectors would be a good start but does require a little investment depending upon the number of devices needing to be replaced. The other low cost alternative would be to cross zone motion detectors together or another sensor with the motion detetors. Instead of dispatching on one motion being tripped it would be necessary to have two motions to be tripped (within a specified amount of time) before central station dispatchs the authorities.

My experience at Home Depot is that that maintenance and restocking go on all night -- when is the store ever buttoned up and not occupied?

Lose/bypass the motion detectors and use video motion instead. Set the minimum target size to something larger than a cat, like perhaps a wombat.

Set an output from the VMS to the intrusion system, so an alarm still occurs. But now the manager(s) can video verify the alarm from their smart device.

Then again, problems caused by a 13+ year old cat will probably go away pretty soon anyway. 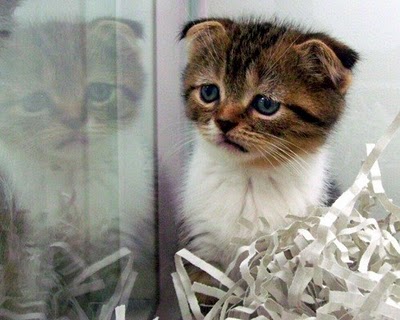 ^ analog upvote for appropriate use of sad kitten photo

analog upvote for legitimate use of the wikipedia reference page for wombats in a discussion thread.

UPDATE: Home Depot corporate office steps in and says cat can stay. I guess that's too bad for that assistant manager who has to wake up in the middle of the night to do walk-throughs.