John, question about some images in the Digital Zoom Tutorial compared to images found in the PTZ Guide (Both excellent references, by the way) In the first you make a strong case for the irrelevancy of higher than single digit zoom factors. As an extreme example you show this highly pixelated crop and zoom (12X) of a 29MP image: 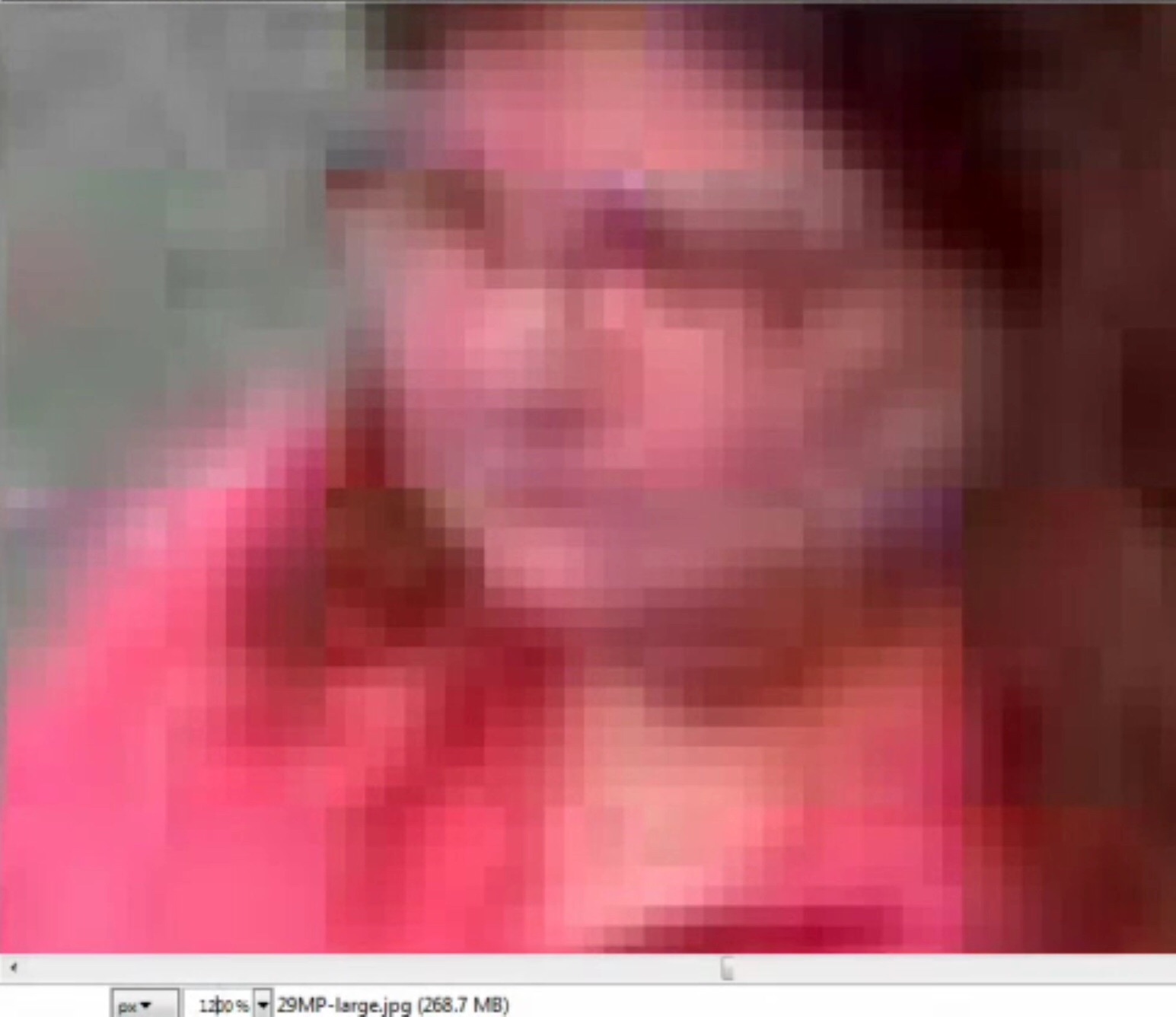 Then in the PTZ guide, while making a similar if less vitriolic point, you max out the digital zoom here to 12X on a 2.1MP camera: 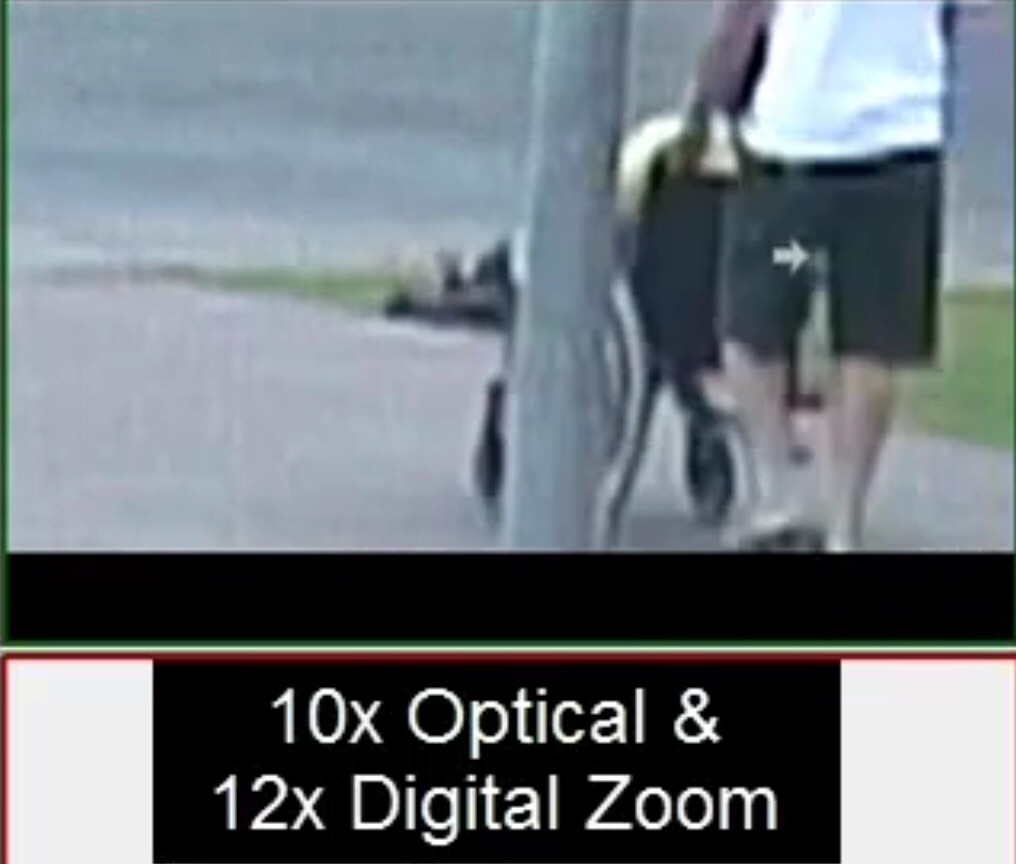 To my eye, the first one is far more pixelated and has been zoomed far beyond the point of being helpful. The second picture on the other hand, while no Van Gogh, is just reaching the point of not being helpful, IMHO.

Note: The quality difference seems so large that I assume I am misunderstanding something from the videos, or my math is wrong. That's ok by me. Also, I apologize if my cropping and sizing for the post has altered the perception of the images, I don't think it has; but use them only as a reference back to the actual videos to be safe.

I do, of course, have a theory that might explain it partially but first I want to make sure that I have the comparison framed correctly. Thanks!

One is done in gimp (the 29MP), the other in a VMS. How they report digital zoom levels might be different.

I believe the 'other' one is done in the camera not the VMS, and yes it can matter.

How they report digital zoom levels might be different.

If gimp's 12X is at a significantly different zoom level than say Axis' 12X, how does using the gimp tests help us? Wouldn't it be more accurate and fairer to just use the cameras own digital zoom processing when determining what a given X multiplier will look like?

But in any event they do not seem to be reporting different zoom levels, AFAICT; Instead there is a subtle but potentially significant advantage that camera-side digital zoom enjoys over all post-encoding digital zooms, whether on the VMS or gimp.

Namely camera-side zoom can (and should be) done before any compression/encoding is performed, otherwise you are just enlarging artifacts. Though not noticeable at low zooms, once you get to the point where 9x9 macroblocks are identifiable the difference becomes apparent.

I think this is one reason that the pre-compression Axis 12X zoom being sharper than the post-compression Avigilon one.

Also worth mentioning is that: although any camera that can do 10X digital zoom could be made to do 100X as easily, this does not make the spec meaningless fluff. If it was pure marketing and one-upmanship they would all say 100x, but they don't.

On PTZ's this number is important as it shows how far the digital will extend past the optical. Set too low and you could be missing out, set too high and you are always over zooming. A more reputable mfr would spec it conservatively, based on real testing of the camera. Of course this is not always the case. Higher-end cameras, like the one in the video, give you a selectable max, but absent that, the number at least tells you what PTZ behavior to expect.

Show us your test results.

FYI, Ethan and Derek are an on vacation this week, so we are not going to do anything right now, but if you have your test results to share, I'll be happy to review them.

Yes and no. Just to be clear, I am NOT speculating

If you disagree with any of these, I can provide reasonable evidence.

I AM speculating that the fact that gimp was zoomed after compression led to a materially worse result (at higher zoom levels) than if the zooming occurred before. I may be wrong.

It's true that I have compared two different cameras in two different reports in two different years, so what? Is it unfair somehow? It would only be unfair to the Axis, since it is the far lower resolution, far cheaper camera tested three years before the Avigilon. And yet it's image seems far better. It's a natural question if you happen to watch the videos back to back.

Anyway, I get the sense that you think I'm just 'busting balls' or something. I'm not. I was simply trying to make sense out of it; and regardless of the result I have learned those four bullet points above... As for tests, let me see what I can do... Maybe Alex K. has a 29MP H4 PRO kicking around that he can loan out to try its digital zoom/RTSP stream access/corridor mode ;)

Because they were done on different computers, with different screen sizes, with different sized display windows and in different applications. For example, the Axis one was shown on a much smaller frame than the Avigilon one, as shown below (which is itself zoomed to only show a portion of the Exacq client). 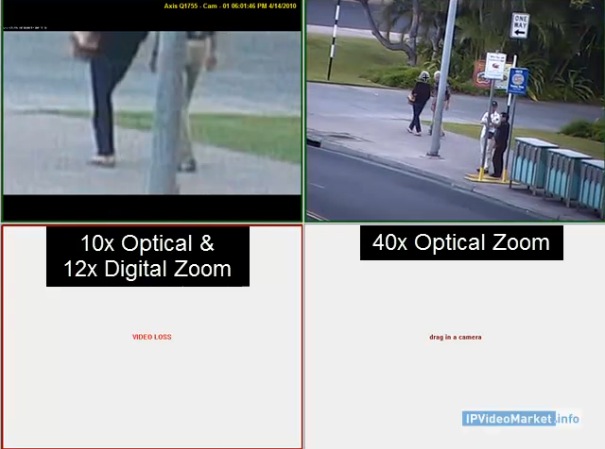 Gimp's digital zoom levels appear to be different then Axis's. For example, 12x on Gimp on a 29MP image zooms in a lot further / tighter than 12x on Axis HD. If you don't believe, you can run the test yourself and you will see this.

If you want to do a test using the same methodology for both cameras, then do it. Don't speculate and draw conclusions using reports that were done using different setups.

And even after all of this, the fundamental point remains, claims of digital zoom do not make a material difference as all cameras can be digitally zoomed and all of their zooms are more than enough to show any meaningful details in the image / video.

"Wouldn't it be more accurate and fairer to just use the cameras own digital zoomprocessing when determining what a given X multiplier will look like?"

For example, the Axis one was shown on a much smaller frame than the Avigilon one.

Whose side are you on anyway? ;)

Yes, I know it's smaller, I actually had to digitally zoom it a bit more to normalize it with the Gimp one, thus even further degrading the Axis pic.

Fortunately we have no need for my speculative comparison since we have your more grounded one:

Gimp's digital zoom levels appear to be different then Axis's. For example, 12x on Gimp on a 29MP image zooms in a lot further / tighter than 12x on Axis HD.

Twice as far, by my estimate. And so I agree, the Gimp image appears zoomed in far more That could certainly be what I subconsciously picked-up on and good reason for the quality difference. That would satisfy me and I would be ready to accept it, case closed, if it weren't for this baffling (to me) picture:

You may be right in the video that "any camera has more than enough digital zoom", but you also contend multiply that 4x is more than enough, even for multi-megapixel cameras. And if you are right about the zoom reporting differences, then this would not apply at least to Axis cameras, (and whoever may have copied their way of reporting).

At the risk of speculation, Occam's razor suggests that maybe their was another click still left in the zoom range when the video was made?? (I know, I know, I'm ordering a Q1755 right now. ;)

*Correct me if wrong.

"Here's the thing, if Axis reported digital zoom levels differently than others why do these pictures match?"

Btw, to clarify for others, and I am sure you agree, what matches in those pictures is the FoV area. Clearly, the level of detail of the Canon is far better, showing the value of optical zoom over digital.

Ultimately, what I am saying is that when using digital zoom in a VMS, you are going to have more than enough of 'it' regardless of what the camera spec's its digital zoom level at.

Related: after uploading and scene specifying an AOV of 48 and then choosing the Q-1755 set to an AOV of 48 also, I noticed that there was some letterboxing around the edges of the image. Some letterboxing was still present as low as an AOV of 40. This means the entire scene detail was still showing until then. Did I do something wrong? Shouldn't the scene FOV always shrink as the AOV decreases?

Ok. I figured it out, no speculation.

The Axis camera zoom, both digital and optical, from the PTZ tutorial do actually match gimp. I scaled in gimp the wide opening Axis shot to 40x and then to 120x and the FOV's match up.

The reason that the digital zoom tutorial examples seem far more ridiculous, even though coming from higher resolution sources is simple:

You are (sometimes) only showing a fraction of the actual zoomed FOV on your monitor. Gimp is actually zooming correctly and reporting correctly, but unlike a VMS window, gimp makes the whole image window bigger with every zoom. But as you point out, you don't have a 3MP screen, so when you zoom much of the scene goes off the screen. Especially in the case of the 12X 29MP image. Which gives the illusion of extreme zooming. So you were right in saying that the two screenshots can't be compared, but the reason is that one is not displaying the whole zoomed FOV.

Would you agree that this is what is happening on a technical level, at least?

I thought you might, since I believe it's obvious if you watch the video, so I didn't include any screenshots or 'evidence'. Just trying to save space and time. But I do have them, and will provide them if your not fully convinced.

Also, I assume you are prepared to argue that it doesn't matter whether the whole FOV is showing, but first I wanted to make sure we are agreement about what technically is occuring.