Sunrise and sunset are particularly challenging times for surveillance cameras as very high light levels are concentrated in a narrow beam, like so: 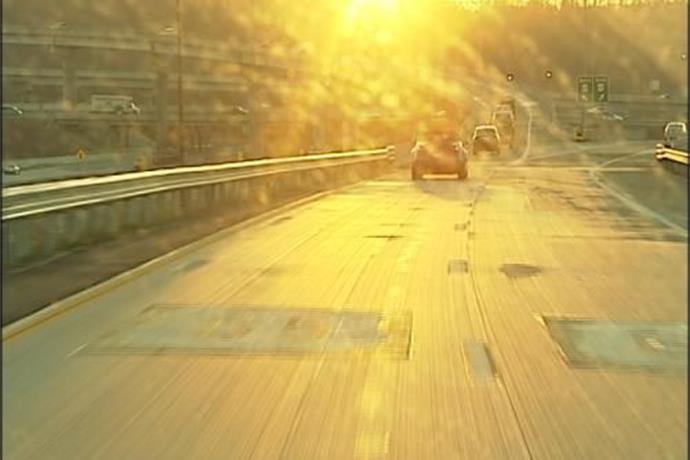 The question becomes: What's the best way of dealing with that?

I only recall doing one test scenario for this, in a 2011 WDR shootout. Here's a comparison:

Obviously lens flare was a big deal for a number of cameras. Addiitonally, WDR likely helped (e.g., the CH140) but still the problem was significant.

Anything you do or would recommend for sunrise or sunset glare?

Obviously the best thing you can do is get the sun out of the image. Usually this means angling the camera down more. That's not always possible, though, because you'll start to chop off subjects' heads and remove parts of the scene you may otherwise want. Mounting the camera higher could help increase the downward angle, but obviously you'll start to lose facial shots.

I have seen WDR help in these settings, too, but it still doesn't eliminate it.

If the source of trouble is a single window (not a glassed atrium), sometimes the application of polarized film to a pane will mitigate the issue for <$100. I have noticed reflectivity off of a polished floor or windshields in parking lot shots can also be problem at certain times of day: 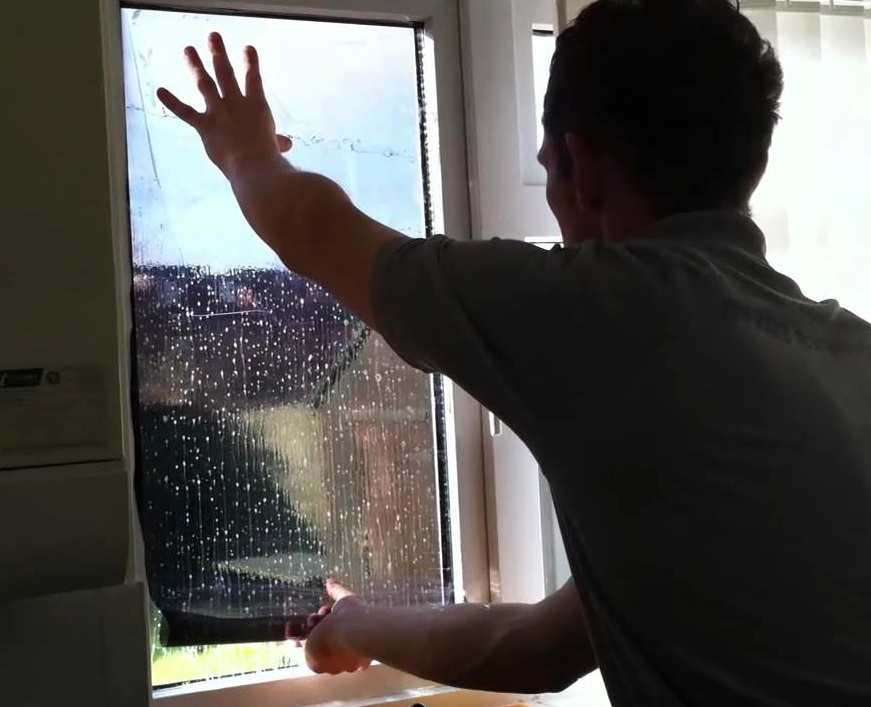 That's a good suggestion. I was thinking primarily of outdoor issues, but for indoor that would help (presumably if the owner/user is willing to pay for it, which is not a certainty given the cost).

A decade or so ago I addressed this with some older analog cameras using a cs-mount polarizing filter that fit between the camera's lens and the camera. I can't find the company anymore, and this is something of high interest to me.

I have corresponded with one manufacturer about it, asking about polarizing filters, but I have to provide them with example video so their engineers can see the exact issue, and I haven't done that yet.

There is an additional complication with the housing front glass on outdoor cameras, which if dusty can make this kind of problem even worse due to high diffusion of sunlight passing through the "dust filter" on the housing glass. It's probably similar with domes in dusty areas as well.

Reflectivity off vehicle license plates mid-morning and mid-afternoon can be an issue as well, and I'm pursuing the issue now for a client who has sunlight washing out the plates at those times on cloudless days.

I am very interested in getting information from anyone who has use polarizing film on outdoor camera housing glass plates, or polarizing filters on cameras, whether cs-mount or in some other configuration.

I am surprised no one has mentioned P-Iris. I actually think P-Iris may make a difference here, because light control is a key element in dealing with this.

HLC (Highlight compensation) seems to be a term that Samsung made up? That's not a negative but I am trying to figure out if this is a general term.

It looks interesting. Here's their marketing video for it:

Here's a reseller's website that describes it as "Spotlight BLC ... especially effective for reading the number-plates of cars in streets or parking lots at night."

It looks like some dynamic exposure adjustment that lengthens the exposure when bright spots of light are detected. Pretty interesting. We'll see if the new Wisenet III's have it and, if so, we'll test it.

I believe some Dahua cameras also claim "HLC". I know I've seen it before somewhere. I don't remember it doing very much, though.

I've played with it a bit... near as I can tell, it adjusts the overall exposure to be below the brightest part of the image... not the same as the samples above. The effect is adjustable, fortunately. I'll grab some samples a bit later. (CNB makes, or made, cameras with that feature, BTW - if memory serves, they called it Blue-i, but I can't find anything on their site about it now... must not have been very popular.)

We pretty much just dealt with it. We'ld always try to explain the issues beforehand and almost all customers were fine with it.

It would be interesting to see if the P-Iris does anything to mitigate this scenario. From the early cameras I saw it didn't seem to make a whole lot of difference but I never tested it in an extreme scenario like this.

If anyone has the magic wand to solve this problem I would love to know. Some of the suggestions help, such as indoors place film on windows or simply do not place cameras so they wouldbe forced to look at windows or doors.

However for outside cameras can't always be mounted high enough to angle them down far enough to elimitate the sun.

I have one facility constructed years ago that the ATM or night deposit face cameras were not impacted at all by the sun. However the surrounding area and license plate cameras mounted on poles infront of and behind the units doomed twice a day. tHe facility was constructed with the cameras facing dirctly east and west. So every morning the one camera was blinded and every night the other camera was blinded.

No one is going to spend thousands of dollars on a taller pole or break up concrete simply to move a camera right or left or to move it high to angle it down more to avoid the sun.

That first picture illustrates one of the biggest problems in these conditions: dirt/dust/marks/contaminents on any or all transparent surfaces between the sensor and its target. Keeping lenses and enclosures clean will help the issue quite a bit.

Quality lenses with anti-glare coatings will help, but as with other mitigation methods mentioned so far that are popular on "artistic" lenses, these are not common to CCTV lenses without getting really expensive.

Polarizers will work in some circumstances, but another problem there is that they tend to cost you upwards of two stops of light, which will adversely affect night-time performance. Depending on the glare conditions, the angle you have to set the polarizer at may change throught the year as well. One thing that would be interesting is if you could replace (or even stack) the IR cut filter on an ICR camera with a polarizing filter, so it could flip out of the way at night... although that still limits you to one polarization angle.

Yes at the place I work they polarized some windows for a lobby area, but the outside when the sun is rising is a problem specialy in the summer. I noticed that if they're are clean (camera) it doen't throw as much glare.