Could You Be A World-Class Crook?

Everytime I watch a heist movie, it strikes me that the 'brains' of the operation is the person who knows the most about the protective security systems. 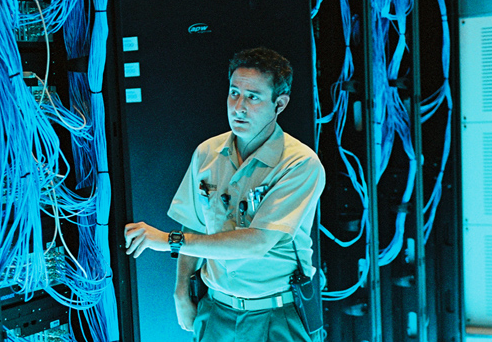 You know who I'm talking about; its the one responsible for 'hacking the cameras' or 'finding the backdoor' into the alarm system. While those abilities are exaggerated and glamorized, it is scary to think that integrators/installers/sales reps are the people that have this sort of knowledge.

Ethics is a factor in any profession, especially security. For example, locksmiths take an oath never to apply their skills dishonestly or with malicious intent. I am not familiar with any such vow for the rest of security.

In summary: What keeps you honest? Do you think your skills would make you a good crook?

I think my skills could make me a good crook. Knowing what to look for and how to potentially bypass them and so on and so forth.

As for what keeps me honest, and not using those skills? I don't know, I was raised well? I know it's wrong? I just can't do it. I don't even feel comfortable keeping customers codes, or setting up users for them.

Brian that's something I've often thought about when I've requested government contracts or been given tours of law enforcement facilities. "What keeps people honest?" is a good question. That's part of why I'm so obsessed/fascinated with the Eli Lily case. It was obviously somehow carried out by someone who had enough knowledge about security systems, but that has yet to come out in the criminal or civil parts of the case. Maybe what stops some people is that most sites they probably work on wouldn't have a high enough reward for the risk.

I think empathy and our desire to have real relationships with the other people in our social network keep us honest. You have to feel that we're ALL in this together, and you have to shoulder your part of the load. It should be a matter of personal pride that you're doing at least your share. If you starting putting other people outside that ALL; grouping them as somehow less worthy, then dishonesty with them becomes easier.

As an example, look at war, possibly one of the most dishonest activities the human animal engages in. We propagandize our enemies as the worst of the worst. Within the context of war we lie, steal and take the lives of the group we oppose. Strangely, within this nightmare most of the people actually doing the fighting are shining examples of honesty and integrity within their group. Their willingness to sacrifice everything they have and ever will inspires the rest of us.

Would my skill set make me a good crook? Well I've done Locksmithing, Burglar Alarms, Fire Alarms, Access Control and CCTV for a few decades. Over the same time I've worked closely with Banks, Police Departments and Prosecutors on their security, so I have some knowledge of how they work. I've done some undercover work with Private Detectives helping them get the goods on some bad people so I'm passingly familar with the tension of a deadline to getting covert equipment into place and working against a somewhat vague deadline, knowing that if i was interrupted I might have some fancy talking to do. So I guess I probably do have the skill set.

I also have the knowledge that if you are crook; if you make a single simple mistake, fail to anticipate things that are totally unpredictable, or trust anybody else you are up against some pretty smart people that can make lots of mistakes, don't have to anticipate all the unpredictable, and can and do trust their fellows with their lives.

What keeps me honest? I care about my reputation. It is my never-ending goal to be recognized as one of the best at what I do and honesty is one part of what I believe I bring to the table in both my job and my personal life. In fact, I'm often considered by many to be "brutally honest". While some may not appreciate that attitude (it includes not being PC), I think even my detractors will admit I am honest.

I upvoted this answer! hear hear

One time, we installed a burglar alarm at a very busy cash business. In order to run a wire, we had to clear space. So a coworker and I had to lift shopping bags full of loose and uncounted cash from a pile stacked against a wall to the other side of the room.

At one point, my coworker and I just stopped for a moment, arms full of cash, looked each other in the eye... and went back to work.

I've found cash, and drugs, and guns (guns are frankly more shocking, working in and around The People's Republic of New York City a I do), and I've never taken anything that wasn't mine. I've installed security systems for thieves and mobsters and even a Red Sox fan once. I've installed security systems for people under indictement for security fraud and for Level III sex offenders and for scam artists of various kinds. I've been paid in cash for a lot of work with no invoices and no warranties. But I've always been honest. The worst thing I ever pulled was sleeping on the job one time, and I wasn't being paid hourly at the time, and I still feel guilty about it years later (the cash jobs and tax avoidance was my boss's decision, not mine).

As a distributor, more than one manufacturer has offered me a little something to push one product or another, and I've never taken anything more than a pen or a t-shirt. Honesty. Integrity. Could I be a master criminal? Well, yeah. It's just not my personality.

It's just the right thing to do. Period.

That and working for an honest wage is more appealing than prison...

I bet its more than just "i'm honest because i want to be recognized/have a good reputation."

Because that leaves open the possibility that you might act "hinky" if you thought you could get away with it.

You strike me as someone who is honest simply because its the way one should act.

P.S. Paradoxically, if your detractors were to admit your honesty, it would also prove theirs. ;)