I thought I would put this out there and see if anyone has experienced similar issues with using the 3500 or 2960 series of Cisco network switches. We have very many installations using the lower end ESW Series and have had no issue whatsover in using any brand of IP camera powered via PoE. Recently on several projects we have starting using the 2960 series. We first noticed on a new installation the some cameras were having trouble negotiating PoE power. Sometimes they would work, sometimes not . A power cycle of the switch would then power up other cameras and then not ones previuously powered. Sounds like a power issue but we are way under the max PoE power consumption for those swicthes. This happen with Arecont cameras, 3 differnt models both Bullet syel and Megadome. We struggled with Cisco and Arecont back and forth , each blaming the other company's product. We resolved it by moving all cameras off PoE and back to 12/24 rack mount power. Well since, then on an existing install, we did a network upgrade changign all ESW series untis out for new 2960 and 3500 series units. This install had all IP cameras from 3-4 brands powered and working perfectly thru the ESW switches. After installing the new switches we had many cameras from all brands either fail to PoE power or even less commonly, pull PoE power but no link. Cisco is telling us that these cameras manufacturers are not follwing tru PoE standards with their Class assignments meaning that the camera is asking for one wattage and actually needing another. Putting external PoE injectors gets the cameras linked back up but defeats the purpose and function of high end expensive networking equipment. This happened on Stardot, Arecont, Vivotek and Axis cameras/encoders, all exibiting the same behavior. Not sure if anyone out there can shed light on this issue.

We have never experienced these issues when using 2960s. We don't use Arecont or Vivotek but we do use Axis cameras and have never had a problem. How is the switch configured?

In the install whre switches were upgraded from ESW to 2960 to switch configs are the same except for the operating firmware that resides on the switch of course. My IT guys worked with Cisoc trying config changes to solve the issue but none worked. Out of 25 Arecont cameras only 2 gave us trouble. Out of 30 Stardot cameras only 3 had issues and with Axis just one of 5.All cameras in their repective models have the same version of firmware running.

I would recommend setting up switches to track POE and Bandwidth via SNMP- watch the trends to see if /when the power drops and cross reference that with switch logs, network usage etc to see if you can find any corresponding trends.

Have you checked the ACL / VLANs to ensure that is not causing a problem? Make sure you are on the latest firmware of the switch as well.

Can you define the power class for each port in the management console, rather than letting the cameras negotiate their power needs? If so, that should allow you to confirm or rule out Cisco's statement. 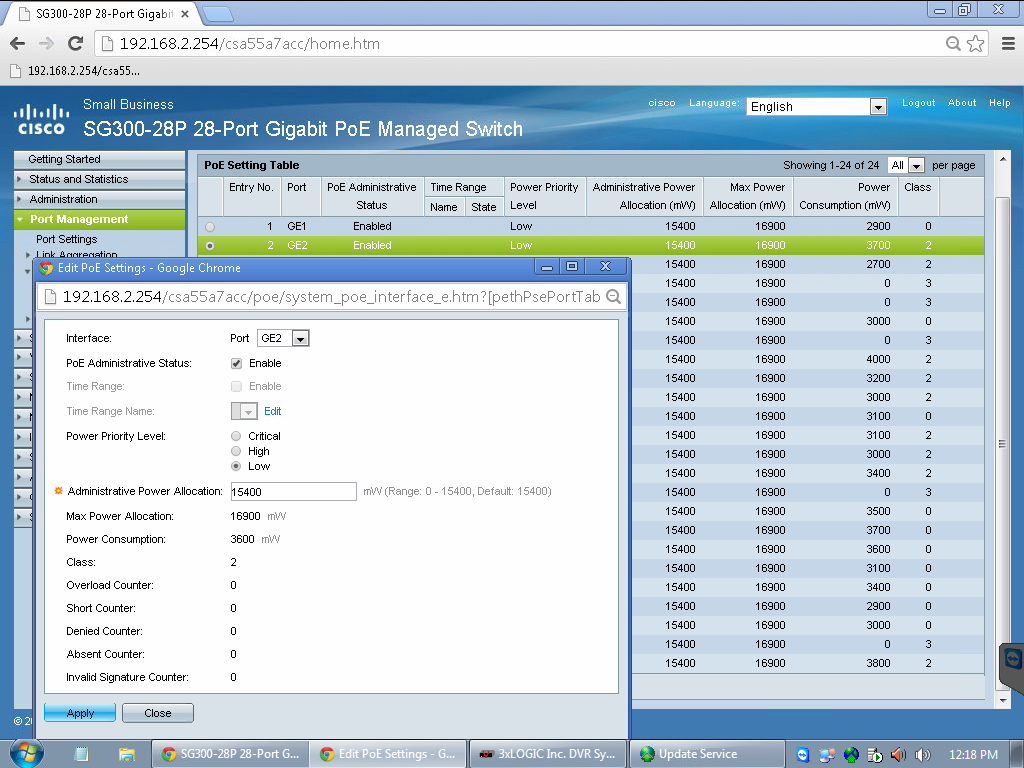 "Putting external PoE injectors gets the cameras linked back up "

That's your first clue what Cisco was telling you about the cameras not properly negotiating power was probably bunk. We'd get problems similar to yours where the Cisco small business smart switches had weird connection issues where it seemed they would not properly negotiate port speed, even with regular intel NIC's in the NVR. Not every switch would do this, but some. I remember back in my early IT days in late 90's, early 2000 where we'd occasional have to statically set port speed on the Catalyst series switches so it would communicate with the computer. (It was the Cisco switch that was the problem. Connecting the computer to a small, other name brand switch would not have problems.)

Funny thing is, we've been using the SF300 and SG300 "Small Business" series (and their predecessors, originally the SFE-1000P) for years now with a variety of HIK, IQ, Vivotek, Axis, and Dahua cameras, and found them absolutely bulletproof. Granted, the biggest of these is only about 40 IP cameras, and those are spread across four switches to accommodate a large oddly-shaped site, but so far, there've been zero issues, save one of the original SFE-1000Ps that was killed recently by a power surge.

I've tried some of D-Link's offerings in the same or slightly lower price range and found that I regularly have problems with traffic choking... but the Ciscos have been fantastic.

Tons of Cisco here of varying types. (3560's, 2960's, 3750x's, 4500's, etc ) Around 500 Axis cameras of varying types. No issues... with one exception that we haven't gotten back to, to investigate. That was with an Axis P5534 if I recall correctly. It was supposedly 802.3at compliant. We have had it on multiple 802.3at compliant switches (30W max) but they did not negoiate and the camera never powers. Just used injectors for the time being until we could get back to it and investigate indepth. I don't even remember all the details, It's been a little while and unfortunately we didn't have much time to spend on it. It is very rare for us to have any PoE issues with any of this gear. I remember the days where Brand X NIC didn't play nice with Brand Y switch for speed/duplex negiotation but that was a long time ago and certainly not just Cisco specific. I haven't seen issues like that in almost a decade. In concept I guess you could say something like this is related. Standards are open to interpretation and get implementated in slightly different ways resulting in interoperability issues at times. Same stuff still goes on at various levels but as far as PoE goes with the gear we have, it's solid.

Yes cheaper switches presented no issues at all. The 2960 and 3500 don't have a GUI for configuration like the Sg300 but we have both hard coded the class type and speeds into the port config for each camera with no luck. Yes all switches are on the latest Cisco firmware revision. I'll have my guys log in and see if they can tell what the camera is asking for power wise. Problem is power is provided but no link so the switch thinks the camera is not linked and doesn't pass data

This is very interresting, we started putting in PoE Inectors to resolve issues where cameras would just get nocked off the network. Looking at all the comments would there be a checklist that could summarize the requirements and checks for using cameras with PoE? I can see some items sticking out, like power consumption, speed negotiation settings.

A little off topic, but for those using Cisco switches in systems you've sold, are you authorized Cisco resellers? Cisco will not support switches installed by unauthorized resellers. When we were trying out Cisco switches we were told this specifically by distributors and they won't sell to you if they find out your reselling them. One of the reasons we stopped dealing with them.

I've never setup the switch myself but we installed hundreds (probably thousands) of Axis and Sony cameras connected to Cisco edge switches and had no problems like this.