I have a 100ft hallway that I want to get the most on one camera.

I am thinking about going with a 2mp 9 -22mm camera and put into into corridor mode. I will put the camer on a wall about 7 - 8 ft up.

I did a quick test and set at about 10mm I got a pretty decent look down the hallway. I was not able to see for about 6 ft infront of the camera, but that is not that big of an issue.

Is this way of going about this or should I do something else?

The most important thing to be careful is DoF issues for a long lens. For example, if you zoom to 22mm, most certainly you will have blurring both at the near and far field of view. This can be overcome by fixing the iris (mostly shut) assuming you (1) can do that and (2) you have lighting all the time you want surveillance.

Here's an example of the risk in a hallway: 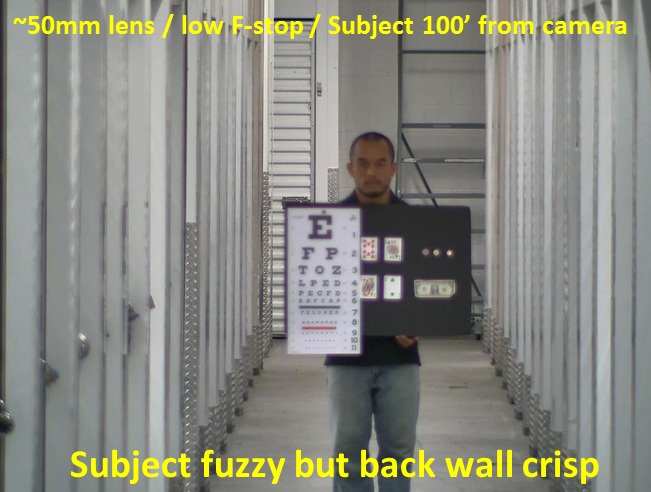 The flip side problem is the shorter the lens, the faster the pixel density drops down the hallway. However, at say 10mm / 27 degrees, at 100' from the camera, the PPF will be a decent ~30ppf.

Would you consider a 360 dgree camera, wall mount it in the middle of the hallway onto the wall, and configure it into 180 degrees mode.

The distance would be split to 150 ft on each side:

dis-advantage: low ppf at the ends of the hallway.

Nidal, thanks for bringing that up.

I think the results will be disappointing.

First, most of the FoV will be wasted as a large part of the image will be consumed by the ceiling, floor and side walls.

Secondly, as you saw the PPF will be low. However, I think it will be very low even 10 feet away from the camera. We are finishing up a test on a 180 degree wall mounted camera (the Vivotek CC8130), and while it's really neat for a small room, in a long hallway it would be terrible.

CC8130 is a 1Mp , so pixel density after 3 meters will be terrible I confirm. On the other hand, it's for detection , not for identification or recognition so it might do the job for a low budget with a very limited dead zone (where other camera might have 2 or 3 meters dead)

It is a school hallway that would be lit whenever they need a recording anyway. So my plan should be good it appears. Thanks

Marc, even if it was 5MP, the problem is the 180 degree field of view. With such a wide field of view, pixel density drops off extremely rapidly.

Moreover, I see no reason to ever use that camera in a hallway. The super wide FoV is a negative because it captures lots of irrelevant areas. You'd be far better off getting a 60 - 90 degree camera (even at the same resolution and price) that would capture details 3x farther than a 180.