In the past couple months we've come across two stories where cities are tapping the 65+ crowd to monitor municipal surveillance systems. In Easton, PA senior volunteers monitor the city's cameras and take down notes on suspicious activity (see photo below). And in Banning, California police are asking its "senior community" to volunteer to watch its 12 cameras. Is this an emerging trend? Do you know of any of examples of this? Who (other than the police or municipal governments) is tapped to monitor cameras where you are? 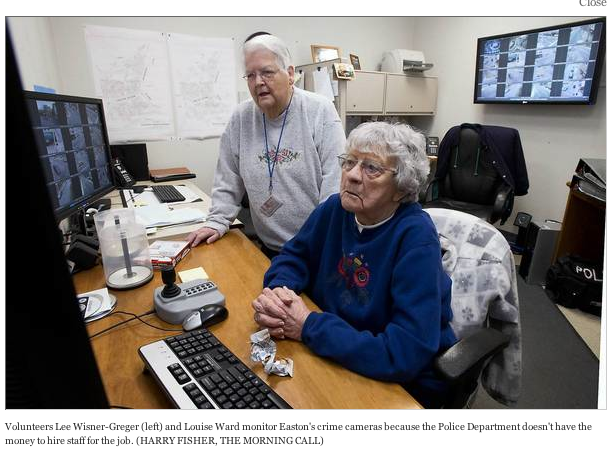 Hey since video analytics don't work, why don't we pick the segment of the population with the worst eyesight to monitor surveillance?

In the UK, I am pretty positive most city systems employe paid, certified professionals.

Although I applaud this effort, but i am not sure about the volunteer part. I also presume that there is some selection process to ensure they are ok with the technology. I am also wondering about the liability involved if someone was attacked and the operator failed to notice.

Since this is the first effort, I would like to see it continue. Maybe there are lessons to be learned here.

As to their ability of the eldery to detect stuff going on, there are tests for that.

I've heard of similar volunteer monitoring programs for years and years. I don't suspect those programs were exclusively elderly but it stands to reason that few people are going to be interested in watching surveillance cameras for no money.

Haha this is great, it reminds me if how at their apartment my grandparents used to prefer watching the front door camera "channel" more than the actual tv shows.

As someone else pointed out, analytics don't work so well and even elderly eyesight out performs the best of the current software programs. Our department has a primary monitoring station in dispatch consisting of three 40" monitors for the primary intersection cameras. Doubt they ever get a chance to look at them due to the work load. The second station consists of two smaller monitors that when actually watched, is done so by volunteers who in large part are senior citizens. This volunteer use is fairly common within departments for a number of reasons. Most often the citizens attend an in house Citizen Academy plus receive additional training specific to their assignment.

For the camera use we go over use of the VMS, what areas have what types of problems to look out for and of course the legalities of using the 20x PTZ that do have the ability to zoom into windows or back yards of private residences in some locations.

Bottom line, most departments don't have the staffing or funds to pay someone to watch a bank of cameras. Something is better than nothing, and in actuality, most of video usage is after the fact when a detective goes looking for something.

Mark, thanks for the feedback! Do you know if there is any government or 'standard body' guidelines on rules for volunteer monitoring? I am curious if there's some document that municipalities draw on when putting together their training/guidelines.

John, not really sure but will poke around a bit and see what I find. Obviously each state is a bit different but on the federal level when it comes to video monitoring expectation of privacy in a public place or that which can be observed from a public location is very diminished. When it comes to the large scale video systems on the municipal level, usually a City Attorney has more issues about the exact wording of any sign that may or may not be posted as compared to privacy issues or who it is that is watching the cameras when the are even being actively monitored.

I have found the big hang up is the wording that may establish a perception that the system is "monitored" in a way that its not. As an example, wording to the effect that the system records video when in fact it does not.

Like most things, all it will take is someone to record something within a residence from a camera mounted in such a way that a person would normally expect privacy. So a camera that can look into a front facing window is not that much of an issue. A 30' pole cam that looks over a house and down into a a side or back window is another matter. I would imagine that like our department, there is a written policy with most agencies regarding this issue and anyone who uses the system signs off on the training. Of course, paid or not, the any city is still on the hook when it comes to liability issues and in the context of law enforcement this is a small potatoes issue compared to driving cars fast and laying hands on people.

Of course, the 1984 aspect to these expanding systems still has some portions of a community on edge while other citizens actively support the use. Our citizens have just funded 450,000 this FY for additional cameras.