I am considering a Dahua HD-CVI 720p camera for licence plate capture at a car park entrance, cars are travelling slow but not stopped. Looking at the manual there is no setting for shutter speed! On the specification it shows Electronic Shutter = 4/25s~1/45,000s (pal).

Any thoughts on this? Will the higher frame rate setting have any effect in this case?

That said, if the cars are going slow (I'll interpret this as 10mph or less), I doubt 30 or 60fps will make any difference.

The shutter speed will though. Make sure the camera lets you set at a maximum shutter speed of something like 1/250s or 1/500s so you can ensure there is no blur.

FWIW (and I haven't done a *ton* of LPC setups) you want 1" or less of vehicle travel during the exposure period.

EG: 10MPH = 176 inches per second. To get reliably good images for vehicles travelling at 10MPH you would want a shutter speed around 1/176th of a second. This of course isn't a standard value so you'd want to round up to the next highest number, probably 1/200th or so.

60fps could result in a shutter as slow as 1/60th of a second. Giving you the ability to capture plates up to a speed of about 3.4MPH.

I don't think 60fps will give major benefit over 30fps, you need a camera that's capaable of a relatively fast shutter.

"60fps could result in a shutter as slow as 1/60th of a second. Giving you the ability to capture plates up to a speed of about 3.4MPH."

To clarify, you don't need 60fps to get a shutter of 1/60th. It is just that you can't have a slower shutter speed than the frame rate (i.e., 1/30s shutter for a 60fps stream). Shutter vs Frame Rate

Even at 15fps, you will get a frame every foot or so, which should be more than enough frames for a good shot so long as the shutter speed is not too long.

Yes, thanks for clarifying.

What I was trying to convery is that you essentially need a camera that is capable of 200+fps, in terms of shutter speed. Meaning that simply going from 30 to 60fps isn't going to make any major difference. The 30fps camera is likely capable of shutter speeds plenty fast enough for LPC. Your main focus would/should be on a camera with a definable min shutter speed.

Also is there any point in having the camera set at 60fps if the recorder can only record at 25fps?

I believe you can set the min and max shutter speed using up the coax controls. Check the 1:30 mark of this video from our Dahua HDCVI test:

Jim, are you sure you can't set shutter speed on that model? I thought it was in most models. Typically you have to set "exposure mode" (I think what it's called? I don't have it in front of me.) to "Manual" or something and then it will let you choose speed. We actually have that model somewhere, but I can't check on it til I get back to the office Monday!

Unfortunately it appears that the people at Dahua think that allowing us to set the shutter speed is a bit advanced for their PAL customers.

I have checked 3 different models of Dahua HD-CVI 720p cameras and none of them allow me to adjust the shutter speed in the OSD menu.

The “Exposure” settings / choices are:

None of these have a sub menu to allow further adjustment.

Below is a snap from their manual on OSD settings.

Does anyone else have a different experience using PAL versions HD-CVI 720p? 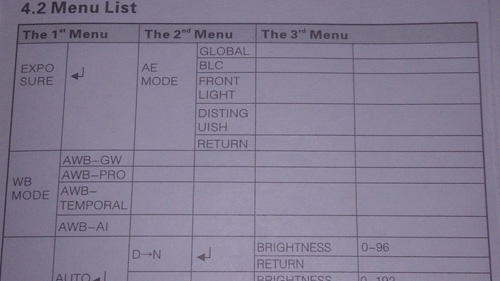 Jim, you may want to look into the 1080p version of that camera. I just found ours (an HFW2200) and it definitely allows manual exposure mode. If I remember correctly (and this is going back a few months now) the 720p models had fewer menu options.

Great discussion but its been a few years now.  Can anyone recommend cameras that allow the manual setting of min and max shutter speeds for recording running thieves without blur at relatively close range (1-30 feet)?  Also would like the option to turn off HDR and DNR as I understand these settings can also lead to blur.

NOTICE: This comment has been moved to its own discussion: Recommend Camera Settings To Minimize Blur On Moving Thieves