I came across this news and I thought in sharing with you. Also, see Sony's announcement.

In a nutshell, Sony has developed a storage tape that allows 185TB of information to be stored. I believe it is going to be a great addition for (video) archiving purposes.

Archiving may be the keyword here. I saw this also over the weekend. The problem is the time that it takes to retrieve the data off the tape I guess or even to add the data as it is not instant or even relatvilely close to instant.

Tape, from what I have seen in surveillance, has been limited to super long term recording where the probability / need for retrieval is very low. Ergo, a niche.

...super long term recording where the probability / need for retrieval is very low.

Like say recording someones whole life in HD, without a cloud, and at 10 FPS, not 30 SPF (seconds per frame). Auto Wifi transfer to tape when home. Just so you can say without exaggeration, "My whole life is on that tape!"

I could see it where a system does a daily or weekly export of archive files and you just save the archive files on tape. But definitely a "niche" area as John pointed out. However, a major VMS who serves sensitive verticals light pharmaceutical, financial, or security sensitive installations might do well to start thinking about integrating such an archive system into their software for automatic export.

If you really want to use obsolete media, I know where you can get a really good deal on magnetic core memory modules. 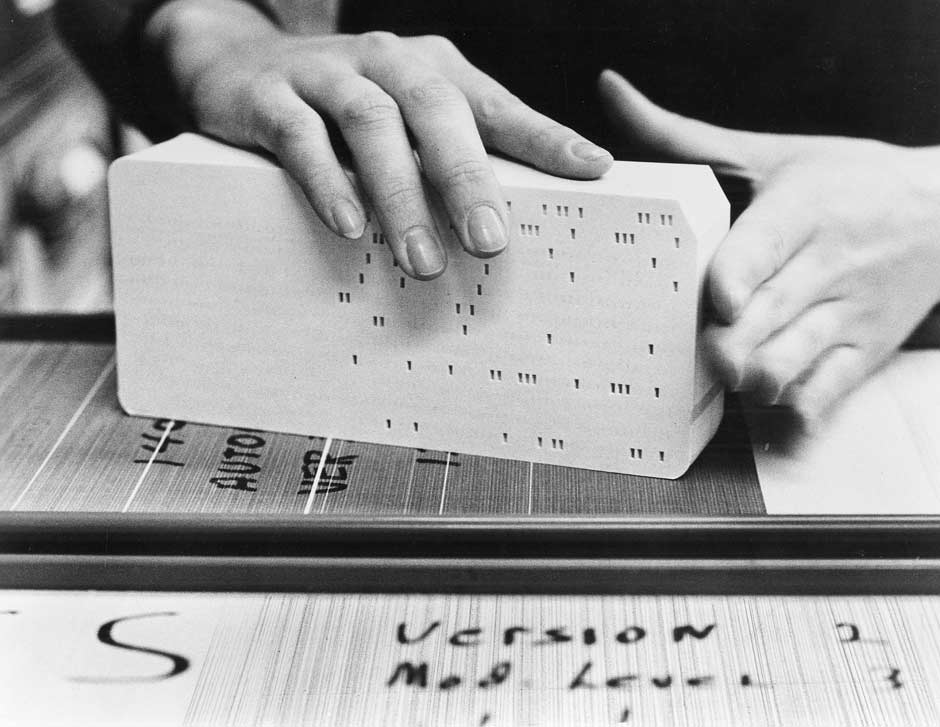 Got any of these in your collection? Back when running a 'job' meant giving an operator a box of ordered cards that you punched (or had punched), to 'submit' (ironic since the ItsyBitsyMachine hardly ever did...) that night. Then you got to come back in the morning to find your job 'kicked out', or more formally 'ABENDed' with a 'SOC7'... Back then computers didn't know how to divide by zero...;)

Could you enlighten us with a storage media that has higher areal recording density?

Could you enlighten us with a storage media that has higher areal recording density?

You would have a hard time coming up with a modern, non-tape, mag storage medium that is less than Sony's 148GB/sq. in. areal density. Most hard drives made after 2010. SSD's, thumb drives, you name it.

Platter storage passed the 150GB/in mark around ten years ago. These days the highest areal densities are over 2000GB/in !

Don't get me wrong 150GB/in is incredible! ...for tape. The great thing about tape is its flexibility and spoolability. It is really unlimited in terms of total capacity, you just make it longer and longer...

What is the cost per TB for the tape system? I've seen quite a few govt. projects that call for 6 mo. of storage or more. If tape is more economical then HD then it makes sense to use online HD system for 30 day recording and tape for near line recording for an extended period.

I'm not sure, but I don't think Sony has released any price information regarding the 185TB tape. I just hope it costs less than $9,305 :)

Horrible suggestion. I've had the same thing promoted for our use and, after looking into it further, decided that a tape solution is not valid. Why not?

And the biggest argument against using tape to extend data retention time for video recording:

Horrible suggestion? That seems a little harsh. If we are talking about simply retaining data from a period of 31 days to 6 months which will rarely if ever be accessed and you are simply backing up data for a single application from your primary storage system then I don't really get your points. But what do I know? I was only inquiring about the economics of this.

I don't agree with a couple of your points like the durability and being expensive.

Tape is usually 1/3 the price of hard disks and takes up less room. Tape also has great reliabilty as it was stored in a large tape library and never moved.

Bill is on to something with long term storage needs. When people think of tape, they usually think of some small LTO system or a tape cassette. When archiving important data, larger companies used to use (Many still do) tape libraries that could store up to 900PB. These were 100% purely automated. Before that data even got to the tape, the hierarchical storage manager of the library would store the data on a cheap hard disk (Data that was not accessed for a period of time) then move it to tape storage. Once on the tape, the data can be recalled thousands and thousands of times and never be corrupted. In fact, the data on the tape was automatically tested and verified by the library that the data is good and uncorrupted...unlike the various Raid Configurations that have corrupted data on them, usually due to human error.

Now think outside the box

You say it cannot work for old archived video? Why not? If a tape library had lets say 200 to 500 tapes or many differnt tape libraries we may have something. Lets modernize it a little. Lets say we take technology, like a BitTorrent technology, and stored small bits of data everywhere (Internal Libraries). When you need the video, you could get it in seconds by using a torrent like client that pulls the data from mulitple tapes, libraries, and etc.. With a technology like this, we could also scale it down for small company storage. Our industry has a lot of innovation to seek out. We can get a lot of innovation from other industries like torrent technology and companies like Plex.

Here is what a Tape Library looks like. You can find them in Data Centers yet.

After reading the discussion about Camera Companion, it seems to me that the security industry needs to look at these types of companies more to see how they do things. Another technology to look at is Popcorn Time. The people who created it, got out of it after mainstream media picked it up (CNN and TechCrunch (how I found it)). You can find the Popcorn Time software (Player) on Github. Just read about it and look at the code instead of using it (As torrenting movies can be illegal in your country even though Popcorn Time stated that it is not illegal in the US as they found loopholes). Basically it plays movies off of Torrent streams in almost real time (According to TechCrunch who gave it a whirl) along with artwork and credits that it pulled from online databases along with Closed Captioning. That code was actually pretty innovative and could probably be used legally in an industry like ours as it is now open source. Another cool thing about Popcorn Time was the torrentor they pulled the movies from was called Yify. Google Yify. What is cool what Yify does (Outside of his illegalness if it was even illegal in whatever country he is from) was that he took BlueRay movies, around, 8 GB's, and made them into a compressed movie that was around 1.4 GB's. It is 1080 video, but like John talks about every other day, the qaulity of the pixel is lower, but does not degrade the qaulity of the movie enough to the average user. Mainly, from what I can tell, is the resolution is lower in the background scenes and more noticiable with black or gray scenes with boxing, but qaulity is still on the level of a Netflix movie. I have tried to google how he or she does it, but I cannot find out. Do they use some sort of smart compression outside the main areas as the main scene looks like great qaulity? And how do they compress so many movies in short periods of time? It takes my computer a long time & uses a lot of computer resources to compress (& change format) a movie, I own, so I can watch it on my iPad using HandBreak. Google all of this stuff, as you will see great debating about how people think how Yify does this and you will see screen shots provided to view yourself. Maybe Netflix does the same thing? Videophiles hate Yify as you will read.

Note - Great article on supposedly how Yify encodes, even though I do not believe that Yify uses the most common Software called Handbrake. Interesting information like below in the article though.

Lesson #3 THE BITRATE DOES NOT AUTOMATICALLY IMPLY QUALITY

I also use Handbrake. I have 50+ movies and TV shows on a 64GB flash drive in my Galaxy Note for trips and vacations. But that entire thread is specious.

There are numerous other examples.

Let's take our application as an example. We have three RAID storage systems recording over 1,000 cameras 7/24, with room to add another 200 cameras. Our storage solution is Dell MD3260-based with each system consisting of one 60-bay RAID and one 60-bay JBOD. Each RAID or JBOD chassis is broken up into 5: 9+2 RAID6 groups with an additional hot spare for each group. Considering that our average bit rate is >2.5Mbps and each RAID group records up to 65 cameras, each RAID/JBOD combination is writing approximately 1.6Gbps. That alone requires pretty high data handling capabilities.

Now, assume we add tape libraries to the equation. Now the storage subsystem is not only writing 1.6Gbps, it also has to continuously read 1.6Gbps plus whatever is being read by our department at any given time.

There are not many RAID systems capable of handling simultaneous continuous write and read requirements at that level and still allow enough overhead to perform maintenance tasks like error detection and recovery. If you add in the overhead required to rebuild parity from a failed drive, you're just asking for trouble.

Now, assume we add tape libraries to the equation. Now the storage subsystem is not only writing 1.6Gbps, it also has to continuously read 1.6Gbps plus whatever is being read by our department at any given time.

That makes sense as far as it goes, but aren't there mirrored RAID 10 configurations where the write mirror is not a disk drive, but actually one or more tape write heads, writing in parallel if necessary, as performance demands? So no added read demand, Yes/No?

Yes, I'm aware of alternative storage methodologies and have even had alternative storage systems proposed to me (Here's Part One and Part Two) but altough I like our technologies to be "cutting edge" I try to avoid (sometimes unsuccesfully) "bleeding edge".

Still, your statement confirms what I stated:

The entire storage system must be designed around the tape.

One thing I have considered looking at but haven't had the time - what about using Veracity ColdStore to archive like tape? It offers many of the advantages without some of the disadvantages.