1000-Plus Camera Project And No Integrator

The Cherokee Nation released an RFP for ~1,000 Axis cameras, a few Ganz corner mount cameras, and a few GE PTZs (see the full solicitation). The cameras will go in locations in 14 counties across northeast Oklahoma. The procurement officer says Cherokee Nation will install the cameras themselves. This is a 100% new install. There are no existing cameras at the locations they plan to install these, the officer said. Here’s the full list of equipment: 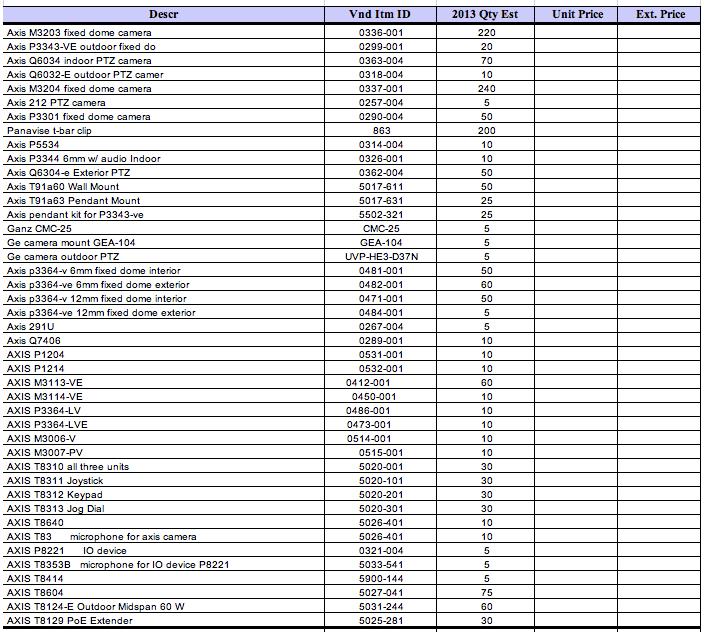 UPDATE October 2013: Now they're looking for an integrator.

Here's an update on this. Now they're looking for an integrator someone to help them install.

I'd think a manufacturer would be alright dealing directly with an end user if they are large enough to have their own dedicated and experianced security systems team AND were trained and certified in the products.

That, and if you were an integrator looking to make some small points on a "pass through" sale and leave support up to the mnaufcaturer, are questions you want to assess before getting involved.

For instance, on our current project, we have tiered support. Our Integrator is our first line of support but we also have received full assurances from the VMS manufacturer and their equipment supplier that we can go directly to them if we want or need to. It makes our choices a bit complex since we not only have to be able to get full support but avoid stepping on toes... We have decided to always start at the Integrator and proceed up the ladder with their assistance unless they are unresponsive.

In addition, some vendors prefer that we deal directly with manufacturers and will facilitate that relationship. I suggest that prospective vendors make support and warranty responsibilities clear during negotiations.

I also strongly suggest that anyone interested in selling to Indian tribes should do their due diligence with each tribe before bidding. License requirements vary from tribe to tribe and mistakes can be costly!

Yes, Indian tribes typically require a Vendor License from vendors, often only if sales exceed a certain dollar value. Fees are usually on a sliding scale determined by the dollar value of annual sales and may have minimum and maximum caps. Although I can't speak for other tribes, in our case, the Vendor License requirement is triggered at $25,000 in sales.

It gets a bit more complicated for one-shot deals, since there is a minimum basic fee for new vendors while the license renewal fee is based on previous year aggregate sales. The basic fee for a first time sale is quite small, no matter how large the proposed sale is, but the renewal fee can be as much as 10 or more times the basic fee. In that case, if we aren't considering buying more than $25,000 from that vendor in future years, we tell them they don't have to renew their license at the end of the year. We can still buy up to $24,999 from that vendor but if sales in any year exceed $25,000, they will be informed that they must renew their license, at a cost determined by previous year's sales to us.

The fees and requirements vary from tribe to tribe.

<edit> By the way, if the vendor(s) include an allowance for it on their bid, it typically doesn't affect the competitiveness of that bid since all vendors would have to pay the same fee if they won the project. We do try to make new vendors aware of the fee structure so that they all can consider it during the bidding process.

We typically go through the vendor but on occasion we go directly to the manufacturer. The vendor is often easier to deal with.

On a deal like this, during the warranty period, if the user needs to replace a camera, does the seller need to get involved facilitating this or does the user just contact the manufacturer directly?

In the past, we handled bids like this through our service department, which handled material-only sales, anyway. It took minimal time to put together, and if you won, you made a couple of points and helped your bottom line with certain manufacturers. If you lost, you were out only the time it took to put together. We won a couple of parts contracts for video, fire alarm, and other stuff, from what I remember.

Now, we didn't have to worry about $5000 licenses to bid, or anything like Brian mentioned, so that changes things.

Why not. We essentially work the same way. Since I've been here (over 15 years), we've never had an Integrator install our cameras.

Do we hire Integrators for certain tasks? Yes, especially if the job is too complex for our skill set or requires more hands than we have in our department but never for camera installations.

Even during a very hectic and intense remodel in 2011, we performed all camera removals and re-installations.

Btw, in the eternal debate about selling through integrators only or not, this is a prime example of the sizeable sales companies like Axis can pick up with their model.

You're right. But even when you have your own team it never hurts to be able to call on someone for help when you run into something you can't handle, you are short handed due to illness, time off, etc. They don't even have to buy any, just put a set price in the bid in case they need it.

I ran into similar situations with my previous employer.

"If it was me I'ld want to buy through an integrator and have them sell me blocks of support time alonside the cameras."

Depends. If they have their own dedicated security installation and management team, why would they? We made overtures to a major super market chain once, but they had their own full time department dedicated to installing and maintaining surveillance systems, so why would they need us?

Interesting. I can see how they would want to keep the money within the tribe, crooked or not!

I have experience bidding on jobs for the Cherokee Nation. The Nation owns/operates several hospitals and a number of casinos. They issue a big buy like this periodically. It gets all the regional integrators tingling, until they discover:

1. It could cost them over $5,000 to buy licenses just to bid. Gaming licences are frequently part of the requirements, even if no service in a casino is being bidded on.
2. National distributors can still make a few points profit on pricing BELOW quoted COST to integrators.
3. Indian Nations exceedingly prefer to buy from tribe members. In many cases, the nation will buy from a member of it's own government. Think that's crooked? They are a sovereign nation and can spend their money any way they want.
Reply

They could. Some large Integrators may be willing to make no margin or lose a couple points taking a risk they may get some service or something out of it. Distibution may not have some of the insurance requirements needed for the bid either, not positive on that though I didn't handle that part of the bid process working for an Integrator.

I've seen similar RFPs where they buy through an Integrator but they set one authorized Distributor to buy the cameras through. Really weird. If it was me I'ld want to buy through an integrator and have them sell me blocks of support time alonside the cameras.

As an integrator we wouldn't even bother with these. No margin, too much hassle and if things go south who are they going to blame? Whomever they bought the cameras from!