The smart home automation segment has exploded.  Now with Axis releasing a camera integrated with Z-Wave, the technology is taking on a new wrinkle in extending I/O features with a whole category of wireless sensors.

But is this a sign of things to come for Z-Wave, or is the technology a risk? In this note, we give a brief overview of Z-Wave and describe its adoption in home security systems.

[Note: This post was significantly updated in 2018 since originally being published in 2012.]

The Z-Wave Alliance [link no longer available] is composed of manufacturers all actively designing and producing products compliant with the network protocol. A review of member documents indicates key attributes of the 'Z-Wave' transmission medium:

The network is designed to be setup with one click, similar to WPS, and is source routed to prevent connections from being lost even if devices are moved. If connections are dropped, devices will automatically renegotiate with central nodes.

Given the wide applicability of Z-Wave to many different types of devices, including locks, lights, contact sensors, and environmental sensors, the data framework of structuring commands (called the command class) takes different forms.  However, from a general standpoint, each command includes a single basic operation.

While early versions of Z-Wave devices had light security, the newest S2 specification offers heavy-duty encryption and protection against jamming and spoofing.   Among the features the S2 spec claims:

Z-Wave S2 is also beginning to see some use in security systems where proprietary wireless most often was used. For example, Ring has announced their DIY Alarm system based on S2. We expect to see more S2-based security systems over time.

In contrast with other consumer wireless platforms, the effective range of Z-Wave enabled devices is relatively short at 100 feet with a clear line-of-sight. Preventing cross-talk between different Z-Wave networks is a concern, and this range restriction is a function of the usage agreement with Zensys.

Z-Wave protocol places a cap on 232 devices per network, however, multiple networks can be joined together in a router to increase this maximum. This device limitation is not seen as important for most home networks, but may limit commercial deployments.

Unlike other standardized security APIs like ONVIF, Z-Wave conformance is highly policed with each device given a specific conformation. For example, Axis' camera has a discrete conformance certificate:

Depending on device types, the data being communication over Z-Wave differs.  For basic sensors and simple on/off devices, a binary framework applies in ~15 different command classes. However, for advanced devices like thermostats, more granular data is sent for reporting on device status (ie: temperature, set points, system status).

Axis conformance includes features that may not yet be fully implemented or used in current products. 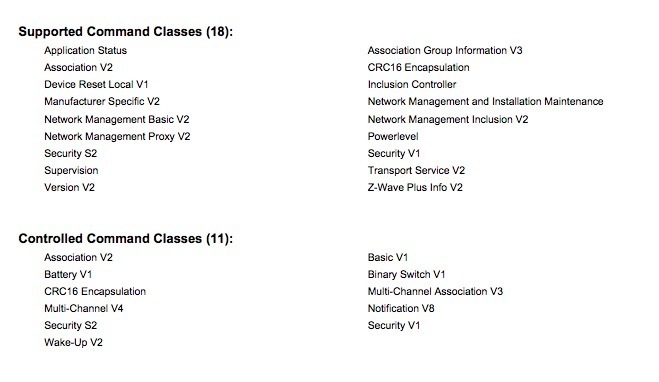 The total number of available classes include specialized battery reporting, tamper notifications, and wireless supervision that become important considerations for intrusion and access control systems but are not vital or mandated elements of 'wireless I/O' sensors.

While general 'Home Automation' is the primary function of Z-Wave, home security systems have been easily adapted to make use of the network. Homeowners are able to remotely control devices like door locks, security lighting, and gate operators.

Intrusion Systems: Alarm panel keypads like the Honeywell Tuxedo Touch and the 2GIG! GC2 & GC3 alarm systems have become central controllers for many home Z-Wave networks. These panels are often configured for remote internet access, which provides an added benefit of using alarm keypads as central control for Z-Wave networks. 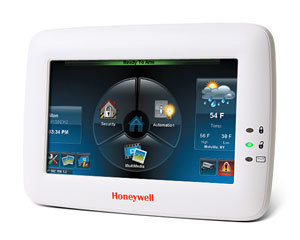 Door Locks: Both Schlage and ASSA ABLOY (Yale) have introduced Z-Wave enabled deadbolts and door locks. Enabled door hardware is able to be locked or unlocked through a remote interface. The following image is a Yale branded residential keypad and deadbolt: 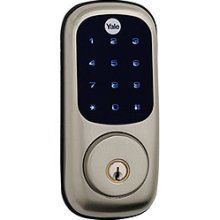 The list of Z-Wave integrated products is growing, and has expanded to over 600 products in the last two years. The forecast of enabled products is expected to grow over the next few years because additional manufacturers have recently signed agreements to produce licensed products.

Several standards compete with Z-Wave, including ZigBee and Bluetooth Low Energy (BLE). Many of these competing standards are also positioned to be low cost, efficient, and secure technologies. However, Z-Wave has gained the support of several manufacturing members including ADT, GE, DSC, Black & Decker, Cooper, and Leviton. Competing standards do not yet have this degree of support.

Previous attempts at home automation were expensive. Average system costs of $10,000 USD to $25,000 USD to automate a typical house. Conventional automation systems have been criticized for being unnecessarily complex to operate for many users. Aside from being easier to administrate, Z-Wave systems and components are much less costly than tradition home automation controls.

Z-Wave stands to be successful where older home automation technology has not been. The technology is less expensive and easier to use than previous systems. Actual system and device performance is subject to product testing and further analysis. However, manufacturer support is strong, and enabled products are becoming more common. Market acceptance of the technology will be an interesting trend to watch.

Axis Launches Z-Wave IP Camera on Jan 31, 2018
Z-Wave is big in home automation but not in video surveillance. Now, Axis is...
Wireless Burglar Alarm Sensors Guide on Jul 21, 2017
Wireless sensors for burglar alarm sensors are an increasingly common option...
ADT Sued, Claimed 'Easily Hacked' on Nov 17, 2014
A lawsuit has been filed against ADT. The class action complaint claims...
Wireless Access Control Panels on Oct 16, 2014
One company claims they can connect access control panels wirelessly with...
'DIY' vs Professional Alarm Systems on Apr 18, 2012
A growing yet controversial trend in alarm systems is for people to do it...
Comments : Subscribers only. Login. or Join.