The US Congress had a hearing titled "Surveillance, Suppression, and Mass Detention: Xinjiang’s Human Rights Crisis" in which Dahua and Hikvision were called out.

Increasing attention is being paid to what is happening in Xinjiang, including calls for sanctions and boycotts against those involved in human rights violations.

In this post, we examine what was said and the potential impact on Hikvision and Dahua due to their extensive involvement in Xinjiang.

China has come under scrutiny from media and human rights organizations for allegedly detaining hundreds of thousands of members of the Uyghur ethnic minority and other Muslims in “re-education” centers across Xinjiang as part of an anti-terror campaign.

China has also drawn attention for its extensive use of surveillance technology there, from facial recognition terminals at gas stations to DNA harvesting. (Chinese state media says surveillance is “necessary to counter terrorism”.)

Hikvision and Dahua are major beneficiaries of this spending. IPVM reported in April that Hikvision and Dahua had won $1.2 billion in Chinese government contracts for 11 large-scale surveillance projects across Xinjiang since 2016.

Hikvision and Dahua were mentioned early on in the hearing by Republican Senator Marco Rubio (FL), who co-chaired the event, saying:

The hearing, and reference to Dahua and Hikvision, may be watched below:

While this was the only direct mention of Hikvision and Dahua at the hearing, security cameras were mentioned by ambassador Kelley Currie, the current US representative [link no longer available] at the United Nations’ Economic and Social Council. Currie said the “security state” in Xinjiang was “perhaps one of the most repressive in the world” and noted that it included “thousands of security cameras, including in mosques”.

As reported by IPVM, one of the government contracts won by Hikvision in Xinjiang mandated the installation of facial recognition cameras at almost 1,000 mosques – every single mosque in the predominantly Uyghur county of Moyu in Xinjiang.

Although Hikvision and Dahua were mentioned by name, any immediate impact to their activities due to their involvement in Xinjiang appears limited for now.

That is because the dominant focus from Marco Rubio and Chris Smith has been to track and possibly restrict exports of certain American surveillance-related technology products, like DNA sequencers from Thermo-Fisher Scientific, destined for use by authorities in Xinjiang. The two Congressmen wrote a letter to Commerce Secretary Wilbur Ross about this issue in May.

The other main focus has been on imposing global Magnitsky sanctions – which ban specific foreign persons from visiting the US and freezes their foreign bank accounts – on Chinese government officials involved in the Xinjiang crackdown.

The person typically referenced as a Magnitsky target is Chen Quanguo, the Communist Party secretary of Xinjiang, whose appointment in 2016 is often blamed for the situation there.

Magnitsky sanctions have traditionally been used against government officials and their associates, so their use against executives of large publicly-traded companies like Hikvision or Dahua would be a first.

However, it remains legally possible. As a long as a foreign person is found to be responsible for “gross violations” of “internationally recognized human rights” such as religious freedom, he or she can be sanctioned, the law reads.

While no one at the hearing mentioned this possibility, one prominent Xinjiang academic, James Leibold of Australia’s La Trobe University [link no longer available], told IPVM in an email he supported it:

The possibility of sanctions seems stronger against Hikvision due to its direct supplying of the “re-education” centers which have garnered so much attention.

Julian Ku, a law professor at Hofstra University, floated this possibility in a tweet last month when the Hikvision’s contract including cameras at a re-education center was revealed: 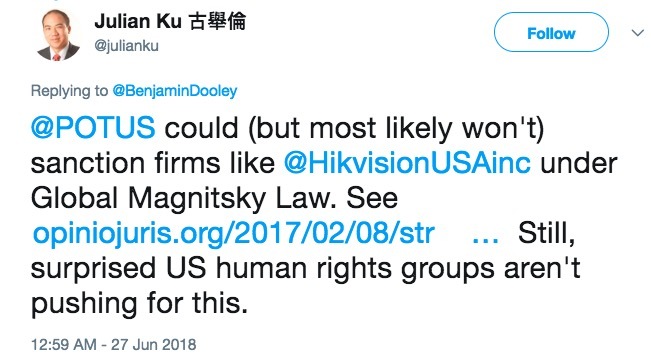 Even if no sanctions are imposed, other possible impacts remain.

Elsa Kania, an adjunct fellow at the Center for a New American Security in DC, tweeted in reference to Hikvision that: 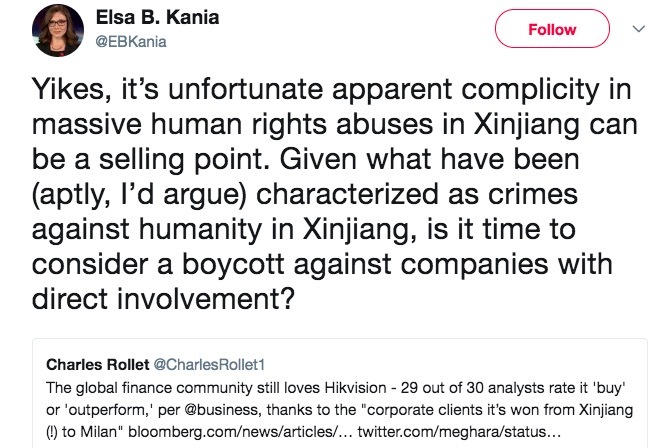 Given the increasing media attention on the region, a boycott or activist-driven campaign against Hikvision, Dahua, and other firms that profit from surveillance in Xinjiang is something that is possible.

Just a few years ago, Dahua and Hikvision were virtually unknown to International academics and politicians but this has changed rapidly. The increased notoriety that these firms are gaining increases the reputational risk globally, even to more mundane surveillance applications.