Now that essentially every IP camera manufacturer has 360 degree cameras, are you ready for a 720 degree one?

Well, that is what IC Realtime [link no longer available] is introducing at ISC West 2014. Inside this note, based on discussions with the manufacturer, we review features, pricing and competitive positioning.

The camera has (2) 360 / fisheye imagers on opposite sides of a form factor approximately the size and shape of a baseball, as depicted to the right:

IC Realtime says all encoding / processing occurs within the unit and that it is PoE powered.

The bright red housing is due to its original use with Ferrari race cars, as shown in the image below, with the camera on the roof, providing a panoramic view. 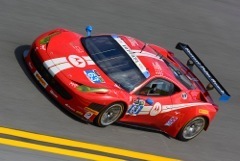 Production units for security / surveillance use will use more traditional / neutral colors.

The concept for the 720 degree units is to put them in a center of an area to deliver immersive coverage of said area.

IC Realtime emphasized that the images will be natively dewarped and that they will have superior image quality to rivals with the same pixel count because of their process.

In addition to their own recorders support for the units, IC Realtime says they plan to support ONVIF.

The MSRP for the 6MP version is projected at $3,000 to $4,000, with traditional security dealer discounts.

There is no other surveillance camera with the same dual opposing panoramic imager design. However, there are a number of offerings targeted at the same type of problems.

One major question will be the value of the imagers 'looking up' as mounting fisheye cameras vertically leads to a major amount of wasted space (most surveillance users find little value in looking higher / above the camera).

Ultimately, the image quality delivered and integration will be key, especially given the product's premium pricing to establish panoramic offerings.

Startup: The Bublcam on Oct 09, 2014
Multi-imager fisheye cameras are not new, but a startup is releasing a camera...
Comments (17) : Members only. Login. or Join.