Most card readers are hardwired to a controller, but not this unit. It claims to be as easy to install as a sticker. Even better: they say it works with almost every credential type out there. So what are the downsides? Are wireless readers the next big thing in access?

The Securitron R100 reader has a feature most do not have: it requires no power or connectivity cabling. For certain openings, like the glass doors shown below, hiding wires and even drilling holes for mounting screws is a huge installation issue with no easy solution. 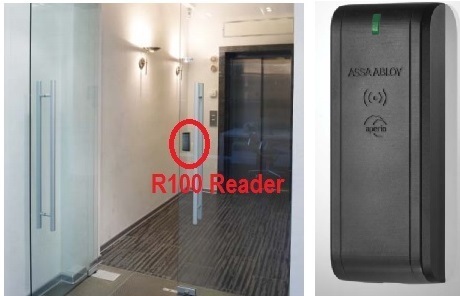 For the R100, the reader sticks to any surface with adhesive, the internal batteries provide power, and it is wirelessly connected to controllers.

Encrypted: While credential information essentially is the key to unlock doors, the unit uses AES128 bit encryption between reader and receiver. Despite InfoSec Experts like Bruce Schneier claiming theoretical cracks of the encryption, practical examples are almost nonexistent and would take more time than common criminals are willing to spend when other methods of entry are likely easier.

50' (15m) Range: The unit claims a modest 50' range which the company claims is strong enough to pass through two walls. Given that most controllers are located within 15' of the door, this range is likely sufficient for most applications.

Low Battery/Tamper Alert: Because the reader is dependent on battery power, when the cell runs low it sends a signal the companion receiver. The hub is wired to send 'low battery' status to the parent access system using the tamper input or auxiliary contact. The back of the reader also contains an optical tamper switch that alarms in the same way if knocked off the mounting surface.

Two Components: The R100 is factory paired with an Aperio wireless receiver hub. The hub is wired to the controller like a reader, and uses Wiegand protocol, so it essentially is wired like a typical reader. This schematic shows typical installation: 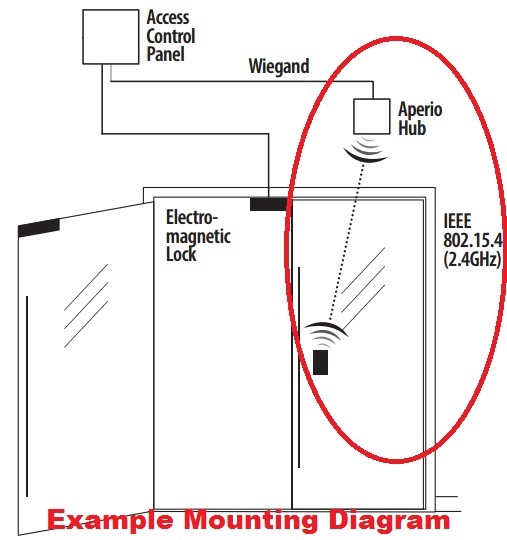 Either reader (low/high frequency) is available at a list price of $700 USD.  However, street pricing is ~$500 and is available through distribution.

While wireless offers advantages for tough installs, like glass doors or tilt-up concrete panel construction, the unit does have downsides:

If two or three installation hours are needed to hang a wired reader (that typically installs in an hour or less), or the controlled opening is glass, marble, or stone, the R100 is potentially a good fit.  However, traditional wired readers are less expensive and typically require minimal maintenance once installed, a claim the wireless unit cannot make.