In the past few years, one of the most interesting developments in access control has been the introduction and growing adoption of wireless access control devices. These devices eliminate wiring to the door, making retrofit of existing buildings simpler and potentially more cost effective from a cabling standpoint. However, they present some unique challenges of their own which must be realized before implementation.

When considering wireless access control, we recommend you consider the following key items:

Inside the Pro section, we examine each of these elements in detail.

First, let’s examine the basics of the equipment.  A wireless access system typically consists of two components: the door device and a receiver.  Devices at the door fall into one of two categories.

Most common when wireless access is considered, the integrated lockset places all access control devices in the door hardware.  Typically this is in the form of a cylindrical or mortise lockset, powered by batteries.  Batteries typically power the lockset for 2-4 years, which is highly dependant upon the number of cycles the lock operates.  Manufacturers typically list a number of openings cycles the batteries will power, instead of a service span in years.

To install the new lockset, the existing door set is removed, a few penetrations are made through the door for wiring and the door position switch, and the new lockset is installed. This is not as simple as it sounds and does require some specialized training, as we’ll discuss later. The benefits of these devices are aesthetics and retrofit capability. Having everything integrated into a single lockset reduces the number of devices around the door, which improves aesthetics. It also removes the need to run any cabling to the door, since it is battery-powered, which makes retrofit of difficult to cable facilities much cleaner.

Integrated locksets can be found starting at approximately $1000 online, but end users should beware: there are many different options that need to be chosen when ordering, from finish to function to lever style, so consulting a professional is recommended. 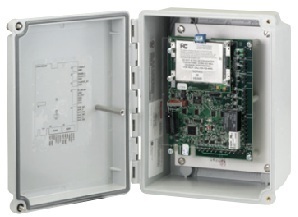 output card readers, door position switches, and request-to-exit sensors, to a proprietary wireless format. These interfaces may be useful in many cases, but typically require power local to the door to function.  If power does not exist near the door, the cost effectiveness of the wireless equipment is questionable.  Motorized gates are often equipped with wireless interfaces when access control is needed, since trenching for a hardwired connection is most often cost-prohibitive.

Interfaces such as these can be found online for about $1500, not including readers or other door devices.

In an open platform system, the receiver converts wireless signals to the same standard wiring a hardwired door would receive: card reader data, door status, request-to-exit, and lock relay inputs. This allows the wireless gear to be used on any manufacturer’s system, without any custom integration work being performed.

The downsides of the open platform design are the number of cabling connections that must be made to the ACP, and the lower door density of these interfaces, which are typically sold in two- and four-door packages.  Compared to 16- and 32-door interfaces seen in custom-integrated solutions or Wi-Fi locksets which require no receiver (software only), a large quantity of doors can become quite costly.

Schlage's AD series and Assa Abloy's Aperio are the most common examples of open platform wireless.

Some systems are integrated to the access control system via API, and connected via RS-485 or Ethernet. For practical purposes, they appear to the ACS as another panel. It is common for RS-485 interfaces to handle 16 or 32 doors, making them much more cost-effective than two- or four-door open platform interfaces. Since the locks "talk" directly to the access control management software, with no receiver hardware required, quantity is only hard-limited by software capacity and licensing.

Assa Abloy's Wi-Fi locksets are one of the more common custom-integrated locksets. Schlage also offers an RS-485 version of their panel interface module which is integrated via API.

The wireless technologies the above-described devices utilize also fall into one of two categories:

No matter which wireless technology is used, remember that for ideal operation, substantial planning and wireless studies may be required.  Range will vary dependent on many factors, such as building construction, existing wireless congestion, etc. Interior range through normal construction (drywall and steel studs) is about 200’, maximum.  In open air with high-gain antennas, range may be close to a mile.

Installation of wireless locksets can be trickier than installing standard access control devices, though with training and practice, it is generally quicker. Removing the need to install cables between panel and door further reduces time, as well as material and labor costs, though the tradeoff is the increased lockset cost. Installing locksets also may require some skills which typical security or IT techs may not have, so training is highly recommended. Knowing how to align a lockset properly with the frame's strike plate, or how to install a lock core, are generally not even considerations when using mag locks or electric strikes on a typical door.

On paper without considering any other factors, wireless access is not less expensive. Even with a +/-10% margin of error on pricing, no substantial advantage is gained via any of the above methods.  However, two points must be considered:

We would expect that these costs would come down as more and more manufacturers adopt the technology, especially if access manufacturers partner with existing OEM’s, such as Schlage or Sargent.