Why Avaya Has Entered Video Surveillance

Avaya is best known as a VoIP spin off of former telecom giant Lucent, but this year they came to ASIS with a booth twice as big as Sony claiming "simpler ip video surveillance" and challenging integrators to see how fast they can set up a network using their "Fabric Connect" products. 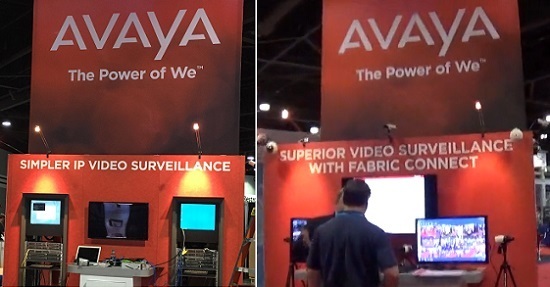 In this note we take a look at their claims, limitations and potential impact within the surveillance market.

Avaya is a voice and data equipment manufacturer which was spun off from Lucent in the early 2000s. They are best known for their business telephone/VoIP products, but also offer conferencing, routers, switches, and other network hardware.

In security, they are practically unknown, with most users preferring Cisco, Netgear, HP, and a few others for switching.

What is Fabric Connect?

Avaya's claimed advantage for video surveillance is based on Fabric Connect [link no longer available] which uses IS-IS, an IEEE standard Layer 2 protocol to set up multicast networks instead of the multiple protocols (PIM, OSPF, and others) traditionally used. Avaya claims this requires less setup, as it is one protocol instead of multiple, recovery times after network failures are much shorter, and the network more secure.

The marketing video below gives a brief high level overview of Fabric Connect. Users may see their brochure [link no longer available] for more.

Avaya's main endorser was a Pelco network engineer who offered gushing praised in the video above. However, now he has become Avaya's business development manager so it is somewhat strange for their own sales person to be providing testimonials.

Other network equipment manufacturers, such as Cisco or Juniper Networks also support IS-IS for multicast, though setup steps vary, and they do not make the claims regarding simplicity or availability Avaya makes with Fabric Connect.

Despite whatever technical advantage it might have, Avaya faces serious challenges in video surveillance.

The vast majority of IP video systems do not benefit from multicast, as it is typically only needed when a large number of viewers or recorders are on the network, regardless of camera count. Therefore, it is more likely in use in large systems, such as casinos, city surveillance, or large corporate networks.

Many large entities have standardized on specific manufacturers (and may have for some time), making penetration with a new line of equipment much more difficult. As noted above, Avaya is neither the most typical networking provider for either IT generally or surveillance ones particularly.

For new deployments which may require multicast, Avaya's challenge is history in surveillance. Systems of this size are mission critical, and consultants, end users, and integrators are less likely to deploy Avaya's relatively untested gear, regardless of potential benefits, in favor of tried and true (though possibly more complex) alternatives.

Avaya, for now, is the only one marketing this and there are handful of 'mega' systems that likely would consider, if using multicast.

Though it is certain that Avaya will be a niche player with this approach, it is possible that they land a few 'whale' accounts / systems that would justify their entry into video surveillance.