One of the great promises of IP video surveillance systems is network convergence - Using the company's IT network to carry data, voice and IP video surveillance together. Claimed benefits included reduced costs, greater reliability and simpler maintenance as a single network replaces multiple networks for IT and surveillance applications. Mega IT companies like Cisco have championed this for years.

Unfortunately, converged networks turn out to be more myth than reality in the real world. 76% of integrators in our IPVM Survey report that they most commonly use dedicated networks for IP Video Surveillance while only 24% reuse / integrate with the existing company network. 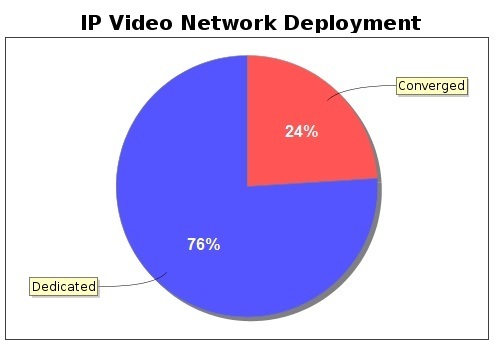 Let's walk through each one, starting with the two directly technical issues:

Many integrators explicitly cited bandwidth concerns. Here is a sampling of their comments:

Convergenced network proponents will be quick to point out how cheap and easy it is to deploy gigabit networks. However, the reality is that existing network infrastructures built over the last decade are often not at those levels and it can be hard for the surveillance integrator to simply change out or forklift upgrade the existing network.

Related to the lack of bandwidth was integrator's concerns that exiting IT networks are often not adequately designed to handle the impact of an IP camera system. Here are their concerns:

Again, theoretically modern IT networks should be able to handle this but the reality that integrators are pointing out is that real networks are often far from ready or capable of adding in IP video surveillance.

Issues in Dealing with IT

Faced with insufficient bandwidth and concerns about network readiness, integrators were equally concerned about the complexity and challenges of dealing with the IT department:

Over and over again, integrators expressed concerns about the real world problems of dealing with the IT department.

Ultimately, for many, it came down to the ability to eliminate blame and control the reliability of the IP video surveillance network:

While many networking specialists will emphasize how easy it is to build networks that are capable of converging data, voice and IP video surveillance, critical logistical issues get in the way. Sure, if a network can be built from scratch today with IP video designed in from the ground up, it might be 'easy'. The problem is integrators are mostly dealing with messy, existing systems with legacy infrastructure in place that causes significant challenges.