He may not have intended to send it to us and he probably can figure out who Brian Karas is, (e.g., on LinkedIn). His objection was to us criticizing his company in a recent post about their competitor Sharp.

The problem is: Knightscope is reckless. They are a danger to themselves, to the emerging security robot market and, by extension, to the security industry as a whole.

the Knightscope machine is designed to look like a movie prop

But look at the Knightscope robot next to movie robots and the similarity is obvious:

And the biggest upside to that is people find it entertaining, like this YouTube video clip where a passerby compares Knightscope (which also makes sounds like a movie prop) to Star Wars BB-8.

UPDATE: That account and video has been deleted. Evidently, Knightscope created an unidentified account to secretly market their robot. Ironically, they labeled it as 'kids love it'

Here is another video from the Stanford mall showcasing Knightscope:

Knightscope may seriously have a future as an (extremely expensive) gimmick/toy far more than for its claims to stop violence or crime.

Doing a trial at a mall across the street from Silicon Valley's largest VCs is appealing to a fund raising startup. But despite the initial good press, the trial was a disaster when the Knightscope robot ran over / into a toddler and then tried to spin the incidence.

Knightscope either did not know or responsibly factor in, that putting a 'trial' robot into a mall with loads of people would present risks. And then their spin job 'field incident report' made it worse.

But, thankfully, it did make clear publicly a critical limitation in using their robots.

Knightscope's business case rests on their $7 per hour pitch distortion, a fraction of what security guards make per hour. Knightscope must think people are stupid because the $7 per hour metric is based on their robots (1) never needing to be charged or maintained and (2) running 24 / 7 / 365; the former is technically impossible, the later warps the hours most organizations would actually use the robot. Once factoring in charging, maintenance and times where the robot is simply not needed, the actual cost per hour is the same or higher than guards. And guards can do things like climb stairs, give directions, open doors, smile, etc...

Knightscope's investor campaign is a spin job that reeks of desperation. They keep bragging about the tens of millions of 'interest' they have generated (now at ~$55 million) but the reality is that not only is the interest non-binding, there is zero vetting and even fake email addresses can be used to register hundreds of thousands of interest. This was covered here: The Dumbest Investment Campaign

As part of their 'investment' campaign, they are promoting the social media campaign #stoptheviolence. Unfortunately, there are zero examples of Knightscope stopping any violence or even a clear theory about why a rolling can with cameras could reasonably stop violence.

Indeed, Stephens talks about how Sandy Hook and the Boston bombings were inspiration for them to prevent crime, as he describes below:

Certainly, he is not the first unscrupulous vendor to link horrific tragedies to their products but it remains absurd. What will their robot do to prevent mass shootings?

As a 'solution' to this, Knightscope has started claiming that they will develop gun detection analytics. 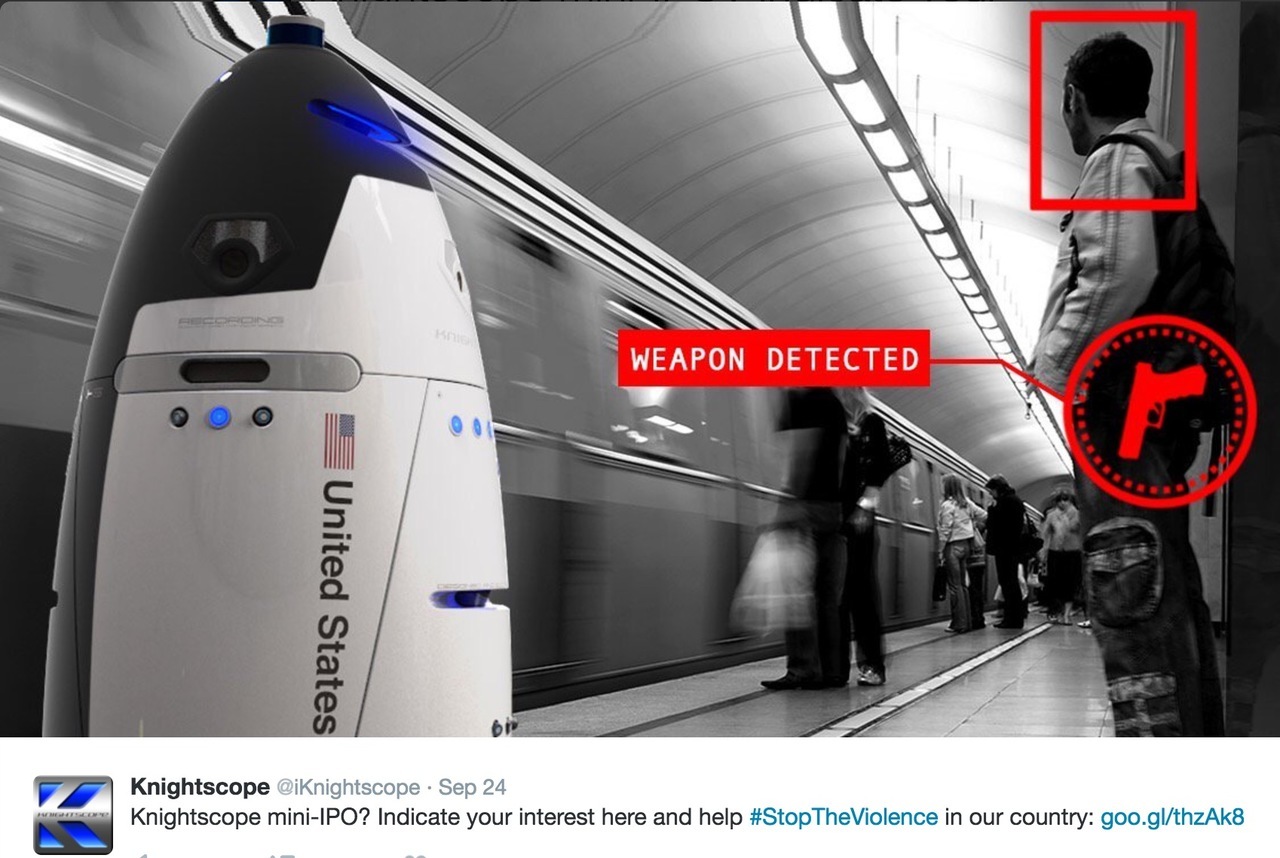 Of course, gun detection (and from the image above evidently hidden guns) is another reckless stunt, given how hard of a problem that is to solve and zero evidence they are close to doing so.

IPVM is certainly 'pro' security robot. The ugly race to the bottom in video surveillance is a threat to the industry and innovation. Security robots, at least in concept, have great potential to revitalize the security technology market.

The problem is the gimmicks and reckless marketing that Knightscope, and Stevens as their marketing leader, specializes in.

Danger to Robots and Industry

The nascent robot market risks damaging its reputation like video analytics did.

Yes, you can do stunts at first to get people excited. But as video analytics showed, the stunts eventually wear off unless real value is delivered. Worse, once the initial excitement wears off, the disappointment / bad taste can remain for years.

Like it or not, Knightscope has made themselves the 'face' of the security robot industry and if they do not mature, they risk harming the reputation of the whole security robots market as a gimmick rather than a real force for the entire security industry.

'Suicidal' Knightscope Robot Drowns on Jul 17, 2017
Knightscope continues its hyper growth, at least when it comes to...
Comments (36) : Subscribers only. Login. or Join.