How To Know If a System is Analog or IP: Tutorial

A fundamental question often asked is: "How can I tell whether I am looking at an IP Video system or an Analog CCTV system?" Understanding which type of equipment you are looking at is critical when determining how to address the issue at hand. While both systems handle video, the equipment and cabling involved between the types is significantly different. In this note, we take at look on how to determine: Is it Analog or IP?

NOTE: This article is a tutorial focusing on the most typical cases and may ignore some advanced edge cases.

Can I Tell By Looking at the Video?

Ideally, you would like to simply look at the video onscreen and be able to tell which type it is. While you can make an educated guess and probably be right 75%+ of the time, this is not foolproof.

If people or objects close to the camera are fuzzy and hard to make out, the video is probably analog. Below is an example of this quality level: 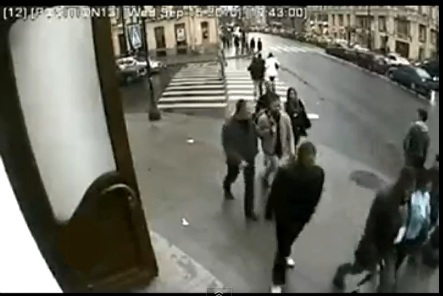 While IP cameras can be set to lower resolution setting (like 320 x 240), it is statistically unlikely that this is done, especially since overwhelmingly IP cameras are now megapixel. That noted, it is not impossible as early IP camera deployments often did this. It is just that those installations are very few and far between in the overall market.

However, edge cases do exist that make guessing whether a camera is IP or analog simply by looking at the video harder. Take, for example, the image below: 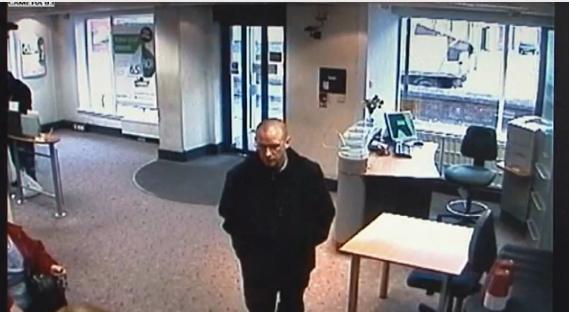 The video quality is not that bad and it may be from an analog camera with a newer DVR or an IP camera (with low quality settings). Given that this video is from a UK bank, it is almost certainly analog. However, we only deduced this based on our knowledge of product selection within the banking market and in the UK, not by looking at the video itself.

To really know for sure, you generally need to look at the equipment itself.

Often, the generic term 'Head End' is used to describe the recorder, regardless whether it is IP or Analog.

Determining if a head end is IP or Analog can generally be determined by looking at the back of the unit. In the images below, we describe why this is the case:

An IP Head End will contain one or more ethernet ports, but no other special connections. The backside of the IP unit (also called the NVR or VMS server) looks very similar to a 'regular' computer. The ports on the backside all correspond to typical computer/network connections.

The ethernet port (also called RJ-45 port) represents where the NVR is connected to 'the network' that also is where the IP cameras are connected. See red box above showing the position of these ports. In most cases, all the video from the networked IP cameras flow through this single port.

An Analog Head End will contain several (between 4 - 32) BNC-type video input ports. The back of the Analog unit (also called the DVR or Video Recorder) may have other special ports for audio inputs or alarm inputs/outputs. The red box indicates these ports on the unit below. These units may also include an ethernet port, but unlike the IP unit, they will always include BNC-type video input ports.

These BNC ports represent where an analog camera connects into the Analog head end. In order for an analog camera to be viewed and recorded, it must be directly connected to the unit via one of these ports.

Some DVRs with analog / BNC connectors also can record / connect to IP cameras. These devices are often called 'hybrid'. From looking at the back of a recorder, you cannot tell if the recorder is analog only or hybrid. As a rule of thumb, if the unit was installed before 2010, it is almost certainly analog only. However, newer recorders may support both analog or IP. The best way to check is to do an internet search of the model number listed on the unit.

The camera performs a similar in both systems, but typically have different connectors. The easiest method of determine if a camera is IP or Analog is to see how the camera is connected. In the images below, we describe why this is the case: 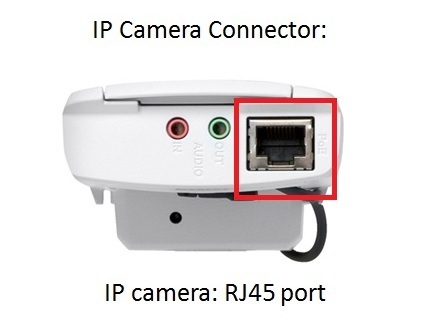 Most IP cameras include an ethernet port on the back, shown in red above. This type of camera is installed with a cable directly inserted into the jack. You will almost never see an RJ45 port on the back of analog cameras.

By contrast, most analog camera include a BNC port on the back (shown in red box below), but BNC terminated 'pigtail' connections also exist. A variety of cables are also a part of this 'pigtail', but the cable that confirms the camera is analog is the BNC connected end. 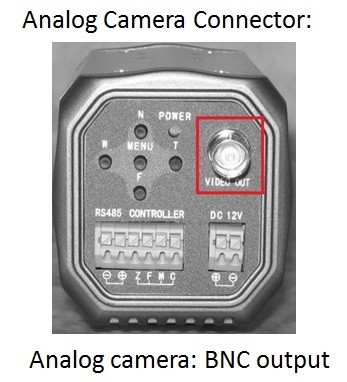 IP Cameras With RJ-45 and BNC

In some cases, a camera may include BOTH types of ports. The BNC port is included on some IP cameras to help the installer focus and position the camera with CCTV installation equipment. In most cases, the 'analog' port is not designed to output the same video quality as the ethernet port. However, this is uncommon and rarely found in new cameras.

Often, troubleshooting camera issues means working through cabling and connectors. In the case of IP vs. Analog cameras, the cabling is typically different. The image below illustrates the difference: 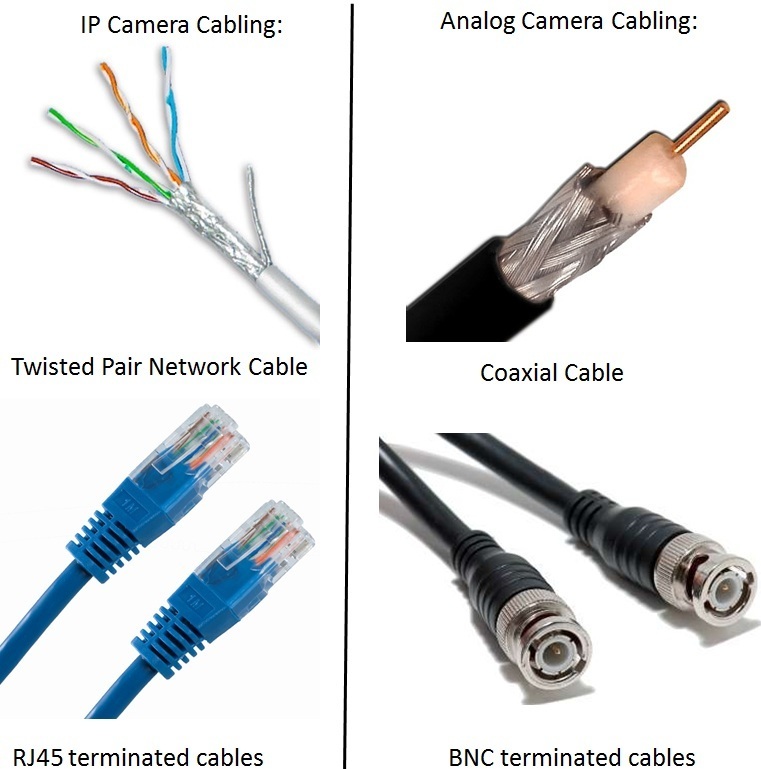 IP cameras generally use network cables to transmit video, specifically called 'twisted pair' cables, because a network cable is actually composed of several smaller pairs of wires twisted together. These cables can be found in different wire sizes, wire types, and jacket colors, but always are terminated in an RJ-45 type of connector. The specific type of connector and color order that wire pairs are terminated vary, but IP cabling will always have at least 4 'pairs' of twisted wire terminating in the connector head. These pairs of wires perform a variety of functions: the transmit video signal, audio, camera position for PTZ models, and camera power in PoE units.

Analog cameras make use of a older technology type of wiring called 'coaxial cable'. These wires are always terminated in BNC connectors. When compared to IP cabling, Analog cabling is a single core wire, surrounded by an insulating material (called the dielectric) and a thin metallic shield layer, wrapped up in a single jacket. Each of these four elements is very important to delivering quality signal.

While the cable types above cover 90% of all examples, there might be special cases in which a different type of cabling is used for either type of camera. For example, a device called a 'video balun' can be added that allows analog cameras to use twisted pair cabling instead of a typical RG59 cable.

Likewise, in some cases where substantial coaxial cabling already exists but IP cameras are desired, an 'ethernet over coax' adapter may be used. (See our report for an example adapter for additional details.) This device enables an IP camera's video signal to be combined, sent, and subsequently reorganized using RG59 cabling.

While uncommon, these special cases describe why also checking the Head End and Cameras is important.