Though ASIS is supposed to be dedicated to security professionals, their main customer base and revenue source ($10+ million) is manufacturers.

Manufacturers each pay tens to hundreds of thousands for booths plus around a million to sponsor various aspects of the show, e.g., $50,000 for their signs in the aisle, $3,500 to put their logo on a golf ball, $6,000 to sponsor notepads (pens not included), etc.

However, manufacturers overall feel strongly that they are not getting their money's worth.

In this note, we share survey results from 50+ manufacturers, detailed commentary on the problem and our analysis on what this means for the future of ASIS.

Trade magazines generally steer clear of any negativity but this was so obvious they were compelled to acknowledge it.

"most electronic security-oriented booths were sparsely populated by attendees and vendors almost universally expressed their disappointment to Security Sales & Integration, which estimates the expo attendance at 15,000-18,000."

SourceSecurity was more diplomatic about the problem:

"Foot traffic improved a little on the second day of ASIS International in Anaheim, California. Furthermore, the high quality of meetings at the big industry show tended to overshadow complaints about attendance"

And Security Today found an upside to the decline [link no longer available]:

"Today's tradeshow seems a lot smaller than those in the past. This bodes well for me because I can talk to just about anyone, at any time. The exhibitors run hot and cold for booth visitors."

In IPVM's overnight survey of 50+ manufacturers, the results were overwhelmingly negative. Answering the question "In general, what did you think of ASIS 2015?": 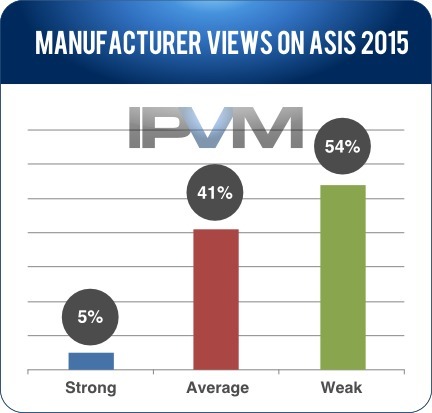 Indeed, this was much worse than the survey results from ASIS 2014, which were negative but not as overwhelmingly negative as for 2015.

Over and over, manufacturers complained about the show's performance:

The ASIS conference / exhibits are in the midst of a clear downward trend compared to ISC West which has managed to remain relatively steady attendance. ASIS, by contrast, is notably below the attendance levels of a decade ago, despite the industry being far larger now.

One aspect is the recent rate of poor new product releases, and for that, manufacturers only have themselves to blame.

However, the more fundamental shift is that, with the rise of the Internet (including manufacturers providing immense information on their own products online), going to trade shows to learn about new things (which is generally cited as the #1 reason to attend) is much less neccessary and far costlier. Certainly, there remains an important role for trade shows to conducting business, especially larger partnerships and larger customers but the amount of shows and the amount spent of a previous era gets harder and harder to justify.

The ASIS organization is built upon the millions from manufacturers (and their legion of unpaid volunteer security managers). For background, see ASIS Financials Investigated.

Now, ASIS is in the midst of selecting a new CEO, their first in over 20 years. This is a critical junction for an organization who is seeing their main revenue source decline.

ASIS says attendance was 17,484, down ~10% from last year's 19,000+ attendance. Note, both numbers are unaudited so keep that in mind. Also, those numbers include ~7,000 manufacturer exhibitors, making the true end user / integrator number far lower.

Weak ASIS 2016 Upsets Manufacturers, ASIS Working On Improvements on Sep 19, 2016
Manufacturer dissatisfaction with ASIS intensified this year. With survey...
ASIS Hurting, Fills Empty Space Pushing Attendees to Show Floor on Sep 08, 2016
ASIS depends on manufacturer exhibitors to make most of their revenue ($15+...
Strong ISC West 2016, Cheer Manufacturers, Trumps Weak ASIS 2015 on Apr 11, 2016
As much as manufacturers were upset with a weak ASIS 2015, they are cheering...
10 Surprising ISC West 2016 Booth Sizes on Feb 17, 2016
Who is spending big money or cutting back on marketing? Who is going to be...
Comments (41) : Subscribers only. Login. or Join.