We occasionally receive questions from users regarding UK-based VMS provider Wavestore, known best by many for their analog and hybrid recording solutions. In this update, we will examine their offerings and potential competitive advantages.

Like many other VMS providers, Wavestore's VMS [link no longer available] is offered in a three-tiered licensing scheme, with versions named Premium, Enterprise, and Corporate. Wavestore also offers DVRss, pre-configured NVRs, and hybrid recorders in varying capacities, as well as capture cards in both analog and HDcctv versions.

Unlike most VMS system licensing, no Wavestore versions are limited by software in the number of cameras they can support. The number of cameras is limited only by hardware. Software maintenance is supplied at no additional charge, as well. The three versions have the following functional differences:

Currently, all of Wavestore's operations, both sales and support, are based in London. Users should be aware of this and the potential effect it may have on support, due to time zone differences (five hours ahead of EST).

Custom views are saved to the server, instead of the client, so users may use their preferred layout no matter which client workstation they use.

Wavestore's customizable client view, as well as their panoramic support, may be seen in this screenshot: 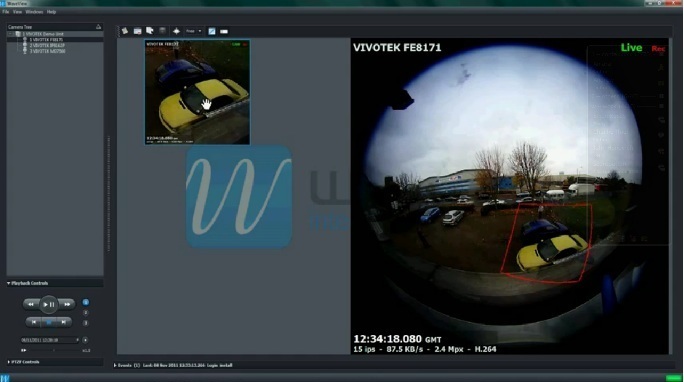 Wavestore has implemented support for a longer list of panoramic cameras than most VMS platforms in the industry. Software currently supports cameras from Mobotix, Grandeye, Vivotek, GeoVision, Lightspace 360, and AMG Panogenics. Some of these manufacturers are relative unknowns outside of the United Kingdom, Wavestore's home market. Dewarping and virtual PTZ are supported on all of these cameras, as well as full panoramic views, selectable for ceiling, desk, or wall mounting.

While not important to much of the market, we have received questions fairly regularly about VMS platforms which support Mobotix's proprietary MxPEG protocol. Wavestore has implemented support for this protocol, in addition to MJPEG. Wavestore also supports alarm inputs and outputs on Mobotix cameras, which many platforms do not.

Compared to other VMS providers, Wavestore's pricing is for the most part in line among mid- and high-end packages. Compared to low-end offerings, such as Milestone Essential or Exacq Start, Wavestore Premium's $110 per channel pricing is expensive.

Wavestore may be more attractive than competitive options to some users due to their integrations to capture cards, panoramic and cameras. Though generally, the majority of the market does not implement either of these features, but for those that do, Wavestore offers more options than competitors. Fans of Mobotix cameras, but not Mobotix Control Center may also find Wavestore attractive.