Unfortunately, watermarking has two common meanings that are radically different. You need to be very careful what someone means when they say ‘watermarking'. 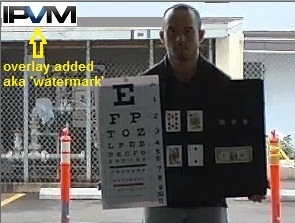 Entertainment companies who want to protect their videos from online theft often seek even stronger watermarking protection. Instead of just proving that the video was not tampered, they want to determine who has distributed the video or where the video was distributed from. For instance, if a video is pirated, who leaked the video originally? This is sometimes called video fingerprinting. However, we have never seen a surveillance company implement this.

Since the two types are so radically different, choosing the right one for your application is easy:

First, the easy and simple case - image overlay watermarking. This can be applied fairly anywhere and anytime - on most IP cameras, on most VMS systems as well as on basic video editing software even after video has been exported. The image below shows an example of this feature onboard a camera, in this case an Axis model:

Where to apply a digital hash watermark is much more complex, both because of implementation constraints and evidentiary concerns.

The first question is: How early do you want (or need) the video to be watermarked? Does it have to be right away when the video is created (at the camera)? Can it wait until the video is recorded? Is it OK just to hash it when it is exported from the recorder?

Here are the options for digital hashing:

However, in practice, statistically, digital hash watermarking is rarely done. Many, if not most courts, will accept exported surveillance video with no watermark at all. However, when digital hashes are applied it is typically applied when exporting from the recorder itself. Export configurations often have an option to enable digital watermarking.

Sometimes digital hashes can be applied when the video is first recorded but rarely is this available in IP cameras. Be especially vigilant to check any marketing claims of ‘digital watermarking' as often this only means image overlay, not digital hashes.

While variation exists, here are some rules of thumbs: