It is often said that necessity is the mother of invention. Not long ago, Canadian integrator Lanoptic Video Solutions won a contract to install a large amount of surveillance cameras for a chain of distribution centers and faced a challenge of how to mount them from web-joist ceiling trusses quickly and conveniently to minimize installation time.

They found that no camera manufacturer had an ideal mounting solution for this specific application and noticed other integrators modified standard pendant mounts with plumbing fittings or cobbled together mounts from hardware store parts. They developed their own solution to the problem, the Novattach quick-mount truss bracket, and are now marketing it to other integrators facing the same problem. In this note, we examine this mounting system and its applications. 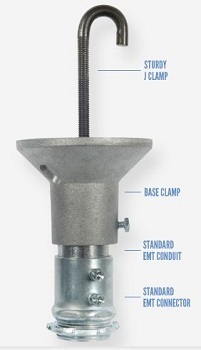 The patented Novattach mount is a fairly simple device consisting of a steel J-Hook threaded into a cast aluminum base clamp which allows a 1-1/4" conduit to connect at the bottom to support the camera. An adapter is provided for 1-1/2" NPT pendant mount dome cameras or a pan/tilt plate is provided to connect a box-style camera to the bottom of the conduit. Conduit drop lengths are cut to order up to 10' and the units are available in a white-powder coat finish or unfinished. 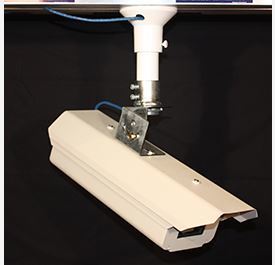 The preferred installation method is to preassemble the camera to the Novattatch mount and pull a patch cable from the camera through the conduit and out the side of the base clamp with enough length to reach a nearby junction box with a network cable termination. Mounting the assembly to the web-joist truss does not require any drilling or fumbling with fastening hardware and can be hung in a minute or two. The J-Hook is inserted in the slot at the base of the web-joist and is rotated 90 degrees to hang from the truss and the entire assembly is spun until tightened. Here is the manufacturer's video showing a typical camera installation:

The camera is installed quickly, however the cabling needs to be connected. If this was a fixed camera, it would need to be aimed and focused.

The Novattach mount is tested to UL standards for support up to 300 lbs. which can make it useful for larger items such as:

Novattach will be releasing an adapter plate soon for use with this mount for concrete ceiling installations, which will expand it's application range.

However, overall, the Novattach is a niche product, likely applicable to less than 20% of all camera installations. It design purpose is for solely web-joist trusses and would not work for acoustic ceiling or drywall mount installations.

The Novatech mount with the included conduit drop in white powdercoat finish has an MSRP of ~$140 (with dealer discounts available).  They also offer an option without the conduit drop in white powdercoat finish  for ~$80 MSRP. Unpainted units retail for $5 less. They are available in Canada through Anixter and Graybar. Novattach is still in the process of establishing distribution channels in the US. Until then, they can be ordered directly from Novattach [link no longer available]. 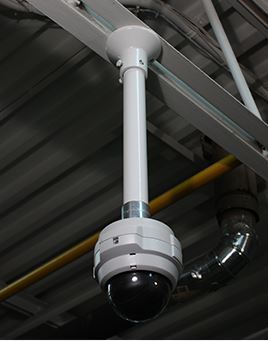 While the cost of Novattech and Axis's mounting options are similar, the Novattech is significantly easier and less time consuming to use in this specific application. To mount the above pictured Axis dome camera with the manufacturer's hardware, an Axis T91A63 ceiling mount is required which has an average online price of ~$125, similar to the Novattach bracket. Installation time of the Axis ceiling kit will take longer and be more difficult due to the number of fasteners and steps involved, we estimate 15 minutes as compared to 1 to 2 minutes for Novattach. Camera moves, which happen often in retail environments, are much faster with Novattach as there is no disassembly/reassembly process.

The Axis ceiling kit includes a mounting bracket and the pendant assembly with a 30" conduit drop rated to support 33 lbs. The kit requires the installer to purchase additional fasteners to mount the bracket to the truss, and then change tools to fasten the 4 Torx screws that secure the pendant assembly to the bracket. Installations requiring conduit drops >30" require the installer to purchase, cut, thread and paint their own conduit drops, adding time and expense.

With web-joist truss construction being predominant in the warehouse, distribution center, and big box retail environments, the Novattach mount has the potential to save a significant amount of time and money on installing cameras. Once preassembled, the camera can be mounted in just a few minutes without any fasteners or tools, allowing an installer to hang many cameras to in a single day. However, the lack of established distribution channels and availability on the shelves of local alarm suppliers hampers its ability to get in the hands of installers who could use them in the US.

Note: Brian Karas suggested this in an IPVM discussion topic.