How many crimes take place in this photo? 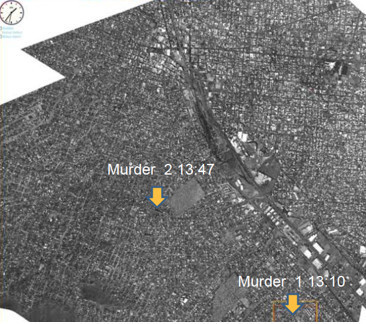 One company claims that their 192 MP camera array can identify and solve numerous crimes and murders, using persistent aerial surveillance

The technology explored in Iraq to track IED attacks. Now, leveraging those experiences, one company has developed a commercial offering.

In an extensive interview with Persistent Surveillance System (PSS) president Ross McNutt, we talk about how this technology is being used from murder cases in Juarez to NFL games.

What is Persistent Surveillance?

Persistent surveillance involves aerial images or video of wide areas for long periods of time to allow investigators to “rewind" an event.

At one point the government looked at using stratospheric UAVs with massive cameras on them to do it. Back then, the application they were exploring was tracking insurgents after IED attacks.

“The footage could be rewound to track the person’s movements all the way to their front door,” explained an official who worked on the project. PSS's CEO was involved in developing similar systems for the Air Force that watched over Fallujah, Iraq.

DARPA has/had a similar project [link no longer available], but using an airship instead of a UAV, developed with vehicle tracking capability in mind. A 2008 report says it could potentially provide “ground vehicle tactical tracking across more than 80 percent of Iraq.”

DARPA has declined to release any information on the progress of the project and the interest in developing the technology to target insurgents untimely fizzled. People with intimate knowledge of the project say the government was trying to throw too much money it at when the solution was much more simple.

McNutt, agrees. “They reached too far,” he said. “They’ve probably spent a billion dollars now trying to do this kind of stuff, but they’re making it a lot harder than it needs to be.”

The entire system is called the Hawkeye II [link no longer available]. The aircraft is a Cessna 207 and flights last from six to nine hours, flying anywhere from 3,000 to 12,000 feet above a target area. Hawkeye II has been deployed from NASCAR races and NFL games to political rallies and to track cartel activity in Ciudad Juarez.

The “eye” of the system uses a 12-imager (varying focal lengths from 24mm to 200mm, depending on the mission and elevation), 192 megapixel setup (16MP each). The cameras are mounted underneath or to the side of the aircraft.

Here is the array: 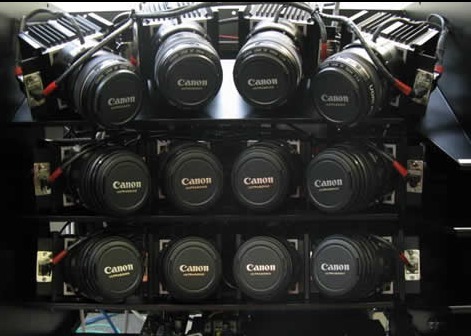 Here is what it looks where it would sit in a Cessna:

Unlike large UAVs, whose cameras orient themselves to show the same image as the aircraft flies, PSS has created software that orients the image for operators. It accounts for hills, roads, and position of the camera in the airplane.

The cameras operate in persistent stare mode taking one image per second of an area as large as 25 square miles.

This is what an entire field of view looks like:

And this link [link no longer available] for a full 26MB photo of Philadelphia from a past mission.

The system uses a high-speed (600 Mbps) data link and directional antennas that PSS created. It has a range of 10-15 miles and communicates with mobile command centers on the ground. These centers are typically staffed by two analysts/operators, but they have had 40 users connected before for one mission.

What the Cameras Can and Cannot See

“Nothing pisses you off more when a murderer leaves your image before you can track him to a house or a final stopping point,” McNutt said.

The cameras cannot make out a person's face, see license plates, or even tell what someone is doing. Their value comes from being able to track vehicles and people of interest. The company's goal is to increase the coverage area of surveillance, not the quality of the images.

“We want to have at least one pixel on a person for as large an area as possible. You don’t really need much more because it’s not going to make a difference. We’re not trying to identify a person, we’re just trying to know where they went after a crime,” he said.

Here is an image of the location of two murders in the same hour. This happened in Juarez. The two white dots at the bottom right of the second image is a murder taking place.

He says they sometimes run into people who are skeptical of its effectiveness.

“They always say the resolution isn’t enough to get images, but then they realize you can follow [suspects] back in time. Then they get it,” he said.

The next phase of Hawkeye will add higher megapixel cameras and a new version of the system designed solely for law enforcement.

How Crimes Are Investigated

Crimes are investigated in real time and after the fact. If the Hawkeye II has been deployed in an area, police can relay information to operators and analysts who can pull images of that area and zoom into the scene of that crime at that time to notate events that happened before and after the crime.

PSS created an incident locator program that ingests police reports as information is input and provides images from that time and location.

In other cases, analysts pull police reports after the surveillance mission has ended and cross reference them locations captured in images. PSS has 50 analysts trained and on call for missions. The company is usually called in when a city sees a spike in crime and wants to know why. They’ll fly for 100-200 hours a month in those areas and put together reports. The images are used for identifying suspects and tracking potential witnesses.

This image comes from the report of a robbery investigation. After analysis they tracked the suspect's vehicle to three other robberies: 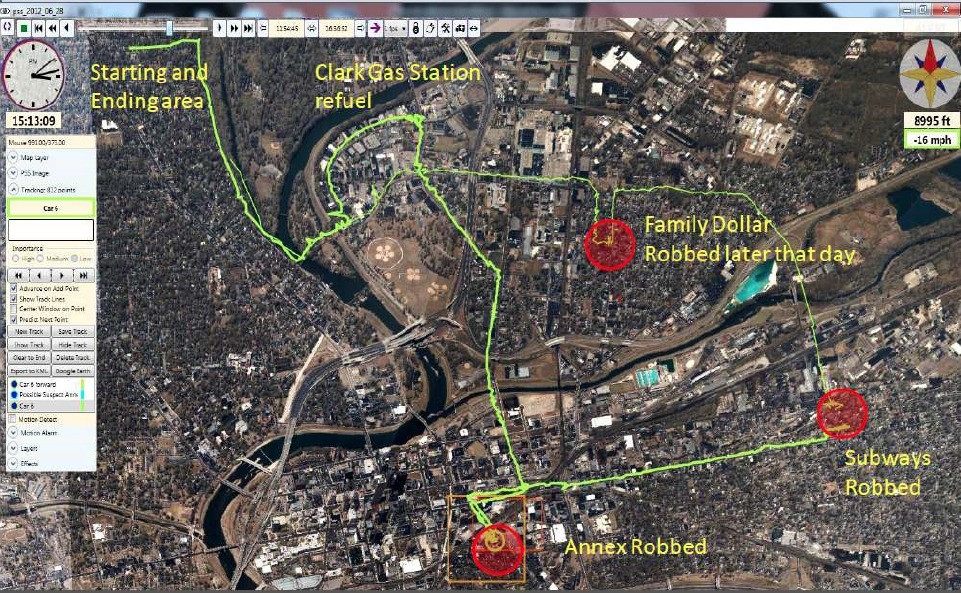 “A helicopter can maybe watch a few houses at a time, or maybe a block. A surveillance camera can only see what’s immediately around it. We can watch a section of a city,” he said.

But, combining aerial images with surveillance footage though has been valuable in numerous cases.

“We can see that someone goes to a gas station before or after a robbery, and then police can get a surveillance picture of when he pays for the gas. For some reason people always go get gas before a robbery,” he said.

PSS offers its flights as a service to law enforcement for around $1,900 per hour, but pricing varies by mission and configuration. The company has run missions for higher and lower prices. The aircraft, data links, camera system, stores, user stations and mobile command center can be purchased for $2-4 million.

Given the system's wide coverage area, it raises privacy concerns. PSS says they are working with the ACLU, NAACP and other groups to revise its privacy policy and has also created a template for law enforcement.

The company had flown relatively under the radar until the ACLU tipped off the Washington Post, he said, and “now everyone knows.”