Walmart does super low cost and they are now bringing it to IP cameras, with a new cloud camera for an almost impossible to believe cost of just ~$30 (or a 3 pack for $90). 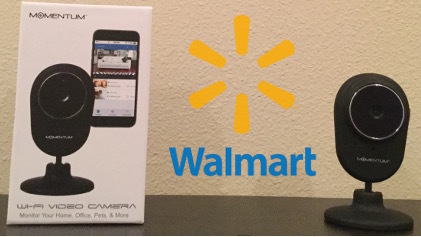 Now, Walmart has trumped Hikvision at less than half Hikvision's cost.

The Walmart Momentum camera works well for live monitoring and is simple to setup with readily available phone support. Given that and its groundbreaking price, it is a strong option for those who want just the basics with minimal hassle.

The camera does offer recording (both cloud and to SD card) as well as alerts. They work but not great. For example, playback can be confusing, no clear video export is offered, false motion alerts, especially at night, are common, etc.

At $30, with simple setup and access from one's phone, the camera opens up a whole new market for users who could not justify ~$200 cloud cameras. Now, they can throw up 3 cameras for less than a $100 and have decent coverage of their house or small business.

On the downside, how anyone (except Walmart) makes money off a $30 camera is a mystery. The most likely means to profit for is the optional $5 monthly cloud storage service (1 week recording / 10GB). If they can get a non-trivial number of buyers to pay ~$50 a year for storage, this might become a solid business.

Nonetheless, so long as this continues, at $30 and no networking setup needed, it mostly cuts out both the traditional manufacturer and integrator.

Momentum is a product exclusive to Walmart but from 'Apollo Tech USA'. A representative tells us that it is manufactured by Shenzhen Apollo Tech, a company that offers a variety of electronics but, to our knowledge, is not a surveillance specialist.

The software (or some part of it) is from Danale, another Shenzhen manufacturer / developer (found in an app error message but otherwise hidden).

Finally, from speaking to phone support, which was readily available and quite helpful, they are not from Apollo Tech, but rather a contracted company.

Physically, it is extremely similar to Dropcam, if Dropcam was made from rubber. The only significant departure from Dropcam is the included micro SD interface which allows for recording without monthly payment.

The video below overviews the camera:

Momentum supports iOS and Android apps but not a web client.

Getting to live video is easy, requiring clicking on a camera thumbnail to bring up the live video. It sometimes takes a few seconds to load live video but, interestingly, there is negligible latency / delay when live video is streaming (unlike Dropcam and most cloud video offerings).

The app is overall simple but there are 3 different admin / control sections that can make getting to other features confusing.

The video below shows live video and overviews the app:

You can use your own SD card (none is provided) and it will record to it without any monthly fee. The main limitation is that alerts are broken but alerts (motion and sound, even with cloud) are not terribly reliable.

Signing up for the cloud service is easy to do right from the app. However, recalling video can be somewhat confusing as the app replays the same clip repeatedly when scrubbing.

Accessing recordings is a major problem. With the cloud, there is no way to export. With SD card storage, you can pull out the card but the video is in a proprietary format (and it would be a pain to navigate either way).

The video below highlights those and a number of other options for the device:

Video quality, during the day, is decent. The camera is 720p but given the lower quality setting it typically auto adjusts to, the video looks more like SD. Either way, this camera should not be used to read license plates or get facial details of suspects. It is best used to simply see what is happening at a high level in an area.

At night, the IR does not work too well, and the image is not very sharp. Also, IR range is limited. Again, it is solid for seeing if someone is there or if the camera is very close to a person, etc., but is not close to the video of a real professional camera.

Directory Of Consumer Security Cameras on Aug 16, 2017
The consumer camera segment continues to grow, with new startups and models...
Dropcam and Nest CEOs Fight, Alarm System Coming on Mar 24, 2016
The Information, a subscriber only Silicon Valley technology site,...
Camera Doorbell Startup Ring Now With ~$100 Million Funding on Mar 16, 2016
Smart doorbell startup Ring has raised an additional USD$61M in...
Blink Totally Wireless Camera Tested on Feb 12, 2016
Wireless cameras almost always still need a wire for power. Given that, many...
Goodbye Dropcam, the $50 Home Security Camera Era Is Here on Feb 10, 2016
Remember those days not too long ago where a $200 home security camera with a...
Mega Chinese Electronics Manufactuer Xiaomi Yi Camera Tested on Feb 05, 2016
Xiaomi's revenue is 4 to 5 times larger than Hikvision's. Only in business...
Home Security Camera Statistics 2016 on Jan 19, 2016
~20% of US homes use security cameras, according to an IPVM survey of 2,000...
Comments (26) : Subscribers only. Login. or Join.