Remote access in surveillance networks is a key cyber security and usability issue. With cyber attacks rising, how can users ensure their systems are secure without losing access from outside the network?

Virtual private networks (VPNs) have historically been used in complex / large systems to secure data but can also be used in smaller sites with relatively inexpensive. To better demonstrate this we purchased two Dell SonicWall SOHO routers and configured them to simulate a site to site VPN.

Inside, we look at VPN usage in video surveillance, including the following topics:

A VPN is a private network that creates a secure tunnel over the internet to connect two or more endpoints. These endpoints can be a VPN appliance, a workstation, or a mobile device. Encryption creates a secure connection from one endpoint to the other keeping data private, even while transmitted over the internet. For example, looking at a Wireshark trace of a secure tunnel, once the TLS connection is set up, only "Application Data" is shown, as packet contents are encrypted. 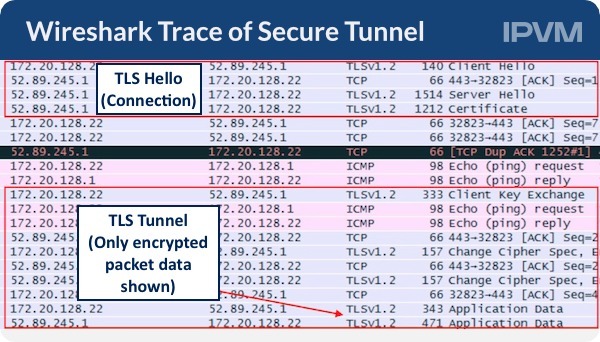 There are several VPN protocol options, which mainly vary in level of encryption and device compatibility. These include:

In this tutorial, our VPN setup used IKEv2 over IPSEC on SonicWALL devices.

There are two commonly used VPN topologies, which have different use cases:

We discuss these topologies in more detail below.

VPNs are most often run on dedicated hardware, typically included on a router or firewall. Pricing for hardware VPN varies depending on capabilities (typically number of VPN tunnels) and throughput handling. Some may be found for <$100 USD online, while large capacity VPN concentrators sell for more than $10,000.

In addition to hardware VPN appliances, users may install software to turn a server/PC into a VPN concentrator. The most popular option for this is OpenVPN, which is priced at $15/year per client.

There are three key benefits to VPNs:

However, there are two drawbacks which have kept VPNs from being more commonly used: 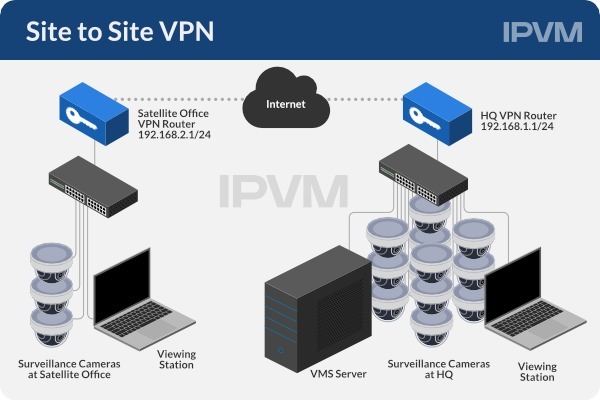 To better demonstrate this we purchased two SonicWall SOHO routers and configured them to simulate a site to site VPN.

In this section we outline the steps taken to configure our routers for site to site VPN use. The exact steps required by specific manufacturers vary, but basically VPN creation is a three step process:

In this step, we select the type of VPN (site to site), protocol used, and give it a name and shared secret (similar to a password, used by both devices to connect). 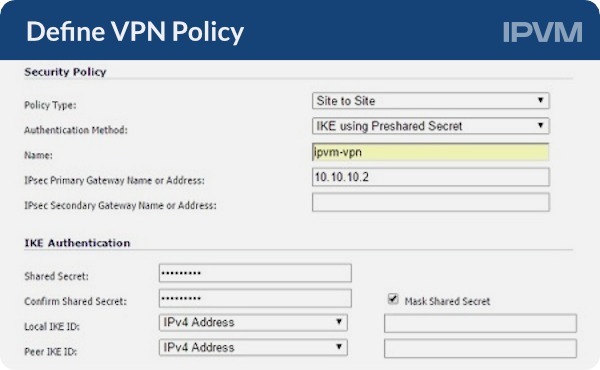 Next, we must define networks for both the local and remote site in order to create routing rules. There are two key notes in this step:

Note that counterintuitively, both these networks are assigned to the "LAN" zone in this example. Despite one logically being the "WAN", SonicWALL reserves that terminology for other uses, so both are LAN. 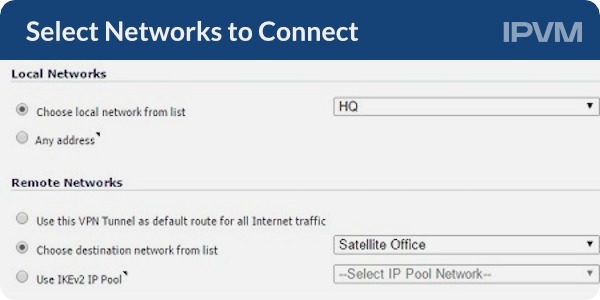 Once we configure both VPN appliances with the above, we can enable the policy to connect the two sites. In the video below, we show that the sites are unable to communicate with each other until the VPN tunnel is established. When the VPN is active devices start responding to ping requests and the camera can be remotely viewed / administered.

In many situations we do not require an entire site to connect to our network, and often our users connect from networks that we do not control. We can provide individual users with VPN access. The configuration starts the same as a point to point solution, create VPN policy. After that we walk through creating a VPN user, and configuring the client software. 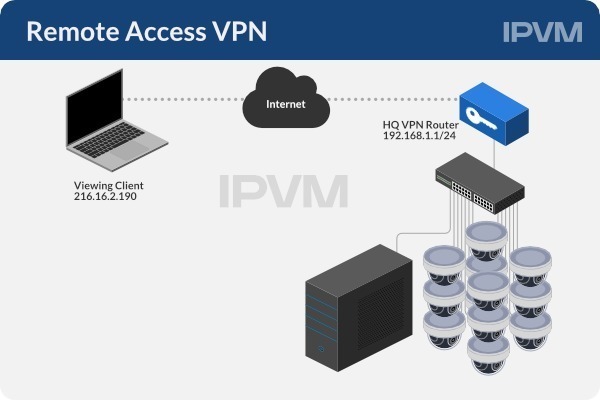 The configuration starts with creating a VPN policy on the appliance located at the site that requires access. This simply requires the connection type, a name, and shared secret. Note that this shared secret is similar to, but separate from, individual user passwords.

After the policy is built on the VPN appliance, we create user accounts. These credentials are used on client devices when connecting to the VPN. 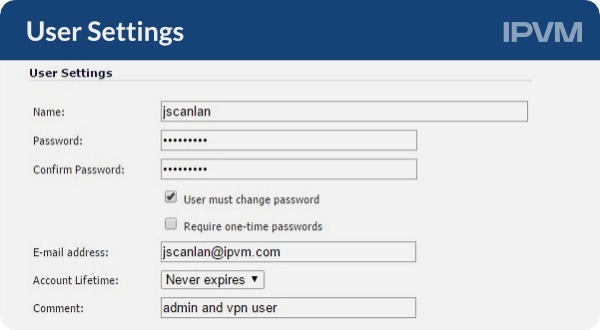 Finally, users are assigned one or more network which they may access via the VPN. These networks are defined above in the Define Local/Remote Networks section.

With the above user created, we may now use the software client to access the VPN, shown below:

The animation below demonstrates a common use case for remote VPN, connecting a client machine to remote server(s). In the example below, servers are unreachable when the VPN is disconnected, but come online once the connection is established, with live video loading in only a few seconds.

Many/most VPNs may be used on mobile devices in addition to hardware/software clients. For example, the image below shows Exacq Mobile running on an iPhone, connected to a remote server via the SonicWALL Mobile Connect app. VPN status is indicated in the top bar, next to the mobile carrier status. 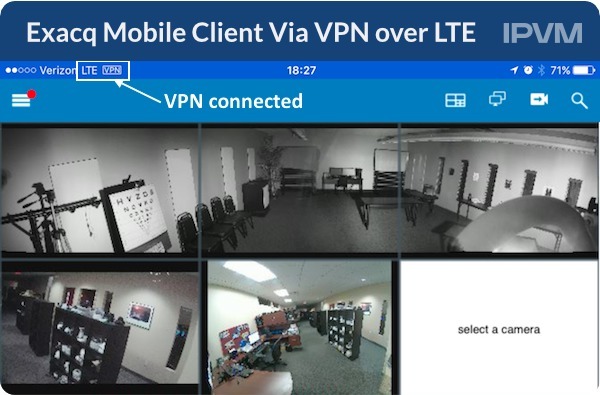 Given the increase in cyber attacks (both severity and frequency) along with the falling costs of VPN hardware, we expect VPN usage to become more common in 2017 and beyond, as it provides better security and accountability than other remote access methods. These issues are likely to only increase in importance as cyber security issues continue to increase.

87-Point Surveillance Install Checklist on Mar 31, 2022
This 87-point checklist helps end users, integrators, and consultants verify...
IP Network Hardware for Surveillance Guide on Dec 27, 2021
IP networking equipment is critical to an effective video surveillance...
Remote Network Access for Video Surveillance Guide on Jul 27, 2020
Remotely accessing surveillance systems is key in 2022, with more and more...
Dahua Critical Cloud Vulnerabilities on May 12, 2020
Dahua has acknowledged a series of cloud vulnerabilities that researcher...
Help Security End Users Facing Coronavirus Improve Remote Access on Mar 24, 2020
Many end-users and integrators are struggling with the impact of coronavirus...
Every VMS Will Become a VSaaS on Feb 21, 2020
VMS is ending. Soon every VMS will be a VSaaS. Competitive dynamics will be...
Locking Down Network Connections Guide on Apr 23, 2019
Accidents and inside attacks are risks when network connections are not...
Favorite Software For Remotely Supporting Video Surveillance Systems on Feb 07, 2018
Being able to remotely support video surveillance systems is important both...
Hacked Hikvision IP Camera Map USA And Europe on Jan 22, 2018
The interactive map below shows a sample of hacked and vulnerable Hikvision...
Comments (25) : Subscribers only. Login. or Join.