Over 230 integrators and manufacturers told us what they believe will be the next big thing in video surveillance 5 years from now, in 2020.

The top two took more than 50% of the vote. They were:

Inside this note, we examine who they beat out and what rationales were given for each of the choices.

Both manufacturers and integrators had very similar selection patterns. First, here are the manufacturer results: 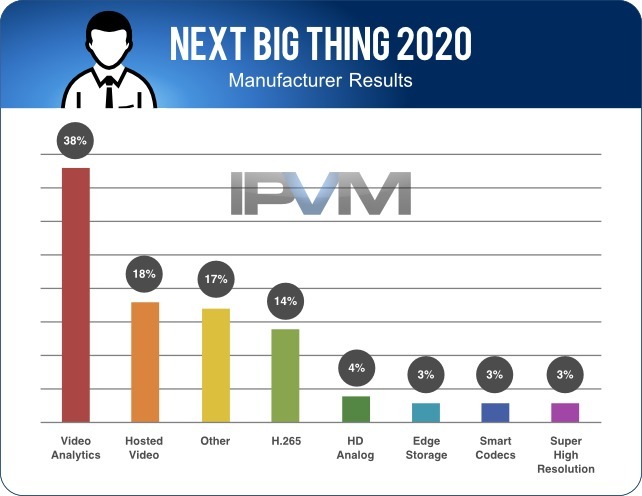 Now, here are the integrator choices, quite similar overall, but with moderate more support for super high resolution and less for H.265. 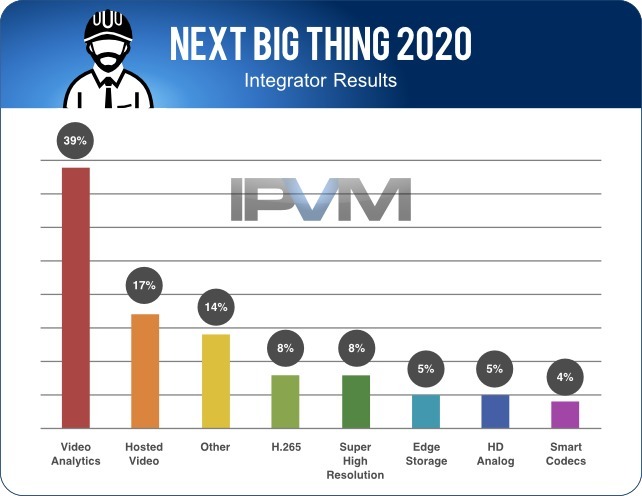 There were a few explicit video analytics naysers on the manufacturering side, including three who mentioned Avigilon's patent enforcement campaign, such as "Patent Armageddon attacks from Avaligon. I don't think any new products can be built without crossing through an existing patent."

In 2012, hosted video and edge storage were tied for second. This has changed remarkably in 2015, with edge storage votes plummeting. This, undoubtedly reflects the significant problems edge storage has had in the past 3 years.

On the hosted side, manufacturers suggested:

A number of people wrote in their own choices. Below are our highlights of interesting submissions.

A few respondents called out drones, which are definitely a segment on the rise outside of security purposes as well:

Especially in the US with the recent anti-police riots, body cameras are getting a lot more attention and appreciation as one respondent noted:

"Wearable video. Police, guard services, retail, and anyone else who interacts with other people will start wearing a camera. Then we will see analytics like facial recognition, people counting, and even mood detection popping up."

One respondent proposed selling video surveillance hardware as a service:

"The biggest impact in five years will be HaaS -- Hardware as a Service. When the cost on a basic IP camera is $30US, providing it for $5 per month starts to make sense. This isn't as avant-garde as one might think; cable/dish/Internet services have been HaaS for many years, so why should VSaaS be any different?"

Finally, one respondent noted developments on the imager side:

"I believe sensitivity increase will be the biggest improvement: - Less lighting needed - Less noise in the pictures which will improve compression (reduce the bandwidth consumption) and also improve video analytics performance."

In the near future, IPVM will issue its own Predictions for 2020.

The biggest risk in assessing what will be the next big thing is understanding what technologies will actually improve and by how much. For example, video analytics has been the next big thing since at least 2005 and remains that way today. For video analytics or hosted video or any other emerging offering, the risk is always that the technology does not improve enough to be performance and/or cost effective for buyer's needs and relative to alternative offerings.