Remote monitoring of VMS systems is often critical. Large organizations have campuses, offices or branches scattered across a country, with a need to access that surveillance video. Indeed, all organization, large and small, frequently want to watch video from their homes or while on the road.

Limited bandwidth remains a key problem, with remote locations often only providing 1Mb/s upstream to send video out. Worse, many locations (e.g., banks and retailers) want to constrain how much bandwidth video takes up to ensure transactions are always promptly processed.

At the same time, megapixel adoption has surged, becoming the de facto standard for new IP video surveillance systems, raising the question of how well remote monitoring will work with increased strain.

We decided to test performance of remotely monitored VMS systems. We used a tool to throttle bandwidth to 3 levels:

We started with thick clients and then tested web clients. (Note: a future report will be dedicated to mobile applications).

This report examines and answers the following:

Here are the key lessons from our testing:

This short video shows the tool (WAN Connection Emulator) we used to throttle bandwidth and simulate various network conditions. We highly recommend it for anyone interested in understanding remote monitoring problems.

The lowest bandwidth used, 56kb/s, was the most stressful for the VMSes in both a single camera view and especially in 4-camera layout. However, marked improvement can be seen when bandwidth increased to 256kb/s and 1.5Mb/s.

The chart below shows the difference between views and bandwidth available (in seconds): 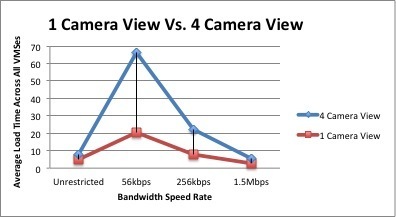 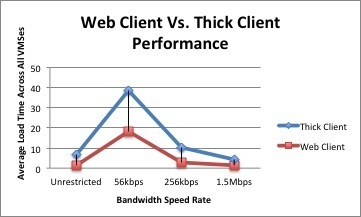 There are 3 main techniques VMSes offer to improve performance at very low bandwidth.

This option showed the most improvement in overall performance. Although all VMSes, (except Video Insight) employ this method in their thin client. However, transcoding implementation effectiveness differed significantly.

Exacq’s implementation of Transcoding was the most notable, allowing the user to dynamically change size and quality of the stream for individual cameras, layouts and playback thus allowing some streaming, albeit at a lower quality instead of no streaming or significantly delayed as in the other VMSes.

In contrast, the majority of VMSes used transcoding on the backend automatically, transcoding the H.264 stream to a JPEG or MJPEG keeping quality and size the same- not taking into account reducing the image size or quality or let the end user choose a lower stream.

Some thin clients are stripped of major functionality and admin level management features, but for the purpose of viewing critical video remotely and/or investigations they suffice.

Touted as a major enhancement, multistreaming showed slight improvement in single camera view (typically half the resolution as full), with upward savings of 5-10 seconds per camera (versus 25 - 30 at full). However, there was a collective improvement in single camera load time when a layout was used, and the cameras low stream was configured to use the lowest resolution and lowest quality. However, once a camera came up the other one disappeared and so on- even with lower streams.

Moreover, how the low stream is configured and whether the user can select it remotely hugely impacts the benefit of having such a feature. In, Avigilon the second stream is added automatically, and the user cannot control its settings relying on the VMS to choose. [Update: Network Optix added controls in their new 2.0 release.]

In Milestone’s Web Client the default stream is used (multistreaming in Corporate only). If low stream is set as the default it affects local users as well- not just Remote.

Exacq’s implementation in the Web Client allows a user to “configure” low streams dynamically affecting only their session, not local users. On the other side of the spectrum Video Insight doubles the users number of cameras in the server list and expects the end user to know which has the lower stream (based on visual trial/error and good naming conventions).

Here is a video:

As we dropped stream resolution from 3MP down to QCIF for a given camera, load times radically decreased. This should not be surprising as bitrate is a key driver of load time. The tests confirmed the impact higher resolution has: 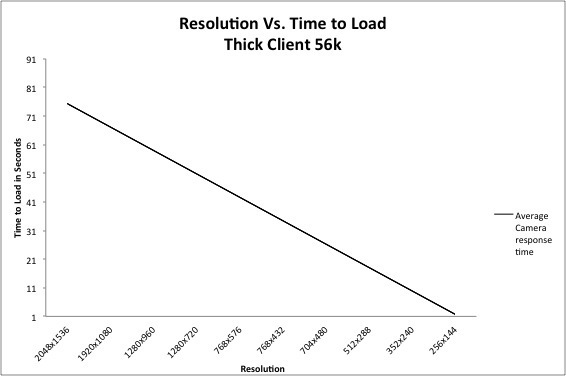 A few other VMS specific issues are worth noting:

Milestone Acquired by Canon on Jun 13, 2014
Industry insiders have been speculating about Milestone being acquired for...
Comments (33) : Subscribers only. Login. or Join.