What hardware does the surveillance market really prefer? With a variety of options available, from name-brand commercial off the shelf hardware, to whitebox, generic solutions, and purpose-built boxes and NVRs, we sought the answer to this question in our recent integrator survey. More than 80 integrators answered, explaining their preferences. In this report, we share our findings and look at the trends we see coming out of them.

We asked integrators two main questions. First, 'When deploying VMS software, what type of computer do you normally prefer?". The response breakdown was: 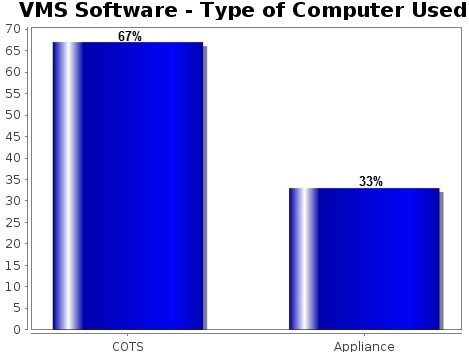 Next, we asked, "When deploying VMS software on Commerical Off the Shelf Hardware, what do you prefer?". Tha answer breakdown was: 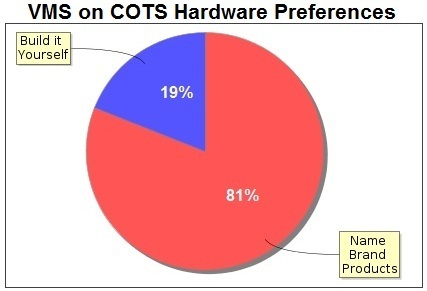 Here are the most notable findings from the report:

Integrators preferred COTS hardware to purpose-built two to one. The number one reason cited was support. Many integrators do not have staff with the skills to build and support their own hardware. Others prefer name brands because their on-site support removes the responsibility of hardware troubleshooting from their own techs.

This is what integrators had to say in favor of COTS hardware:

There are some respondents who preferred purpose-built boxes, as well, and others who used both COTS servers and purpose-built boxes. Most commonly, they cited performance enhancements, with the fact that VMS softwares have been tested with the hardware being a factor, as well.

On a related note, though we did not ask specifically for negative experiences with either COTS or purpose-built hardware, one integrator offered the following comment, similar to a comment we received on our recent update comparingIntransa and Dell:

The second question we asked was whether the integrator preferred to use brand name hardware, such as Dell or HP, or "whitebox" or build it yourself solutions. The vast majority of users chose brand name hardware, 81% vs. 19% preferring generic solutions. The major reasons for choosing brand name hardware were the same as seen above in the COTS vs. appliances question: support and reliability. The number one reason integrators gave for building their own servers was the cost/performance ratio. A number of them stated that they could build more into the server at a lower price than brand names:

Differences Based on Deployment Size

Trends emerged based on the average size of deployment of integrators. Integrators who predominantly installed 16-camera and smaller systems were still more likely to prefer COTS hardware, though the margin narrows, nearly to a 50/50 split. For integrators installing an average of 16 cameras and under, 54% preferred COTS servers, while 46% preferred appliances. On the flipside, the vast majority of integrators (72% vs. 28%) deploying larger camera counts prefer COTS server, nearly a 3:1 ratio.

This is not surprising to us. Most often, small deployments have simpler requirements and integrators want to get in and out them as fast as possible. Choosing a pre-built box instead of having to install software is one way to reduce installation time. Manufacturers of prepackaged NVRs, as well as cameras, often add autodiscovery features to their NVRs, which may help to speed installation even further.

On the other hand, integrators doing business in higher camera count markets normally prefer to customize hardware more precisely for the application. Buying a prepackaged NVR which may support up to 64 cameras, for example, can be a waste of money when only 30 cameras are required. Integrators doing a lot of installations typically also develop standard ordering and installation practices, to speed software installation. This makes prepackaged or specialized hardware less attractive.

While we did not specifically ask which brand those choosing name brand servers preferred, more integrators mentioned Dell than HP, with few other manufacturers cited at all. Dell received 15 mentions, with HP receiving about half as many, with seven. IBM received one mention. No reasons for using any of the name brands over the others were given. Generally speaking, however, they both have approximately similar pricing and product lines, as well as support options. We believe that it likely has to do with Dell's emergence as a dominant force in the last decade. Dell had stronger marketing to both businesses and consumers, leaving them with a bit of an advantage over HP.

The one trend which was most noticeably different between US and international users was on the question of brand name versus whitebox. In the US, 85% of users preferred brand name, while only 15% preferred the generic route. Internationally, however, the percentage of users preferring whitebox solutions nearly doubled, at 28%, versus 72%. While still not close to a majority, this is a non-trivial difference. Some of this swing may be due to the reduced price of parts elsewhere in the world, especially Asia. US integrators also typically prefer to save dollars on labor, instead of parts, and are more likely to view slight savings on parts being offset by an increase in time spent.