With megapixel now mainstream, surveillance systems need to deal with unprecedented loads of live video display and recorded storage. One emerging technique for VMSes to handle this is using multistreaming.

However, VMS manufacturer's implementation of multistreaming varies significantly. In our study, we have found 7 main differentiators:

Watching many cameras simultaneously on a PC can quickly overload it, causing the PC or the video feeds to lockup. Worse, since today's most new cameras are megapixel, it is wasteful to display 4 or 9 of them side by side on a monitor, since the total pixels of the cameras are far greater than the monitor used for display. While you want to have the full MP stream available, always displaying it does not make sense.

With multistreaming, an overload can be eliminated by choosing to display low quality streams side by side. This can cut load by 80-90% while having no impact on visible quality (since each individual video is displayed in a small pane). However, when the video is displayed full screen, the stream can be switched to the high quality one to take advantage of the larger display area.

When bandwidth is low, viewing many high quality streams can actually make things worse, as great delays in displaying video often occurs or the video simply locks up. However, with multistreaming bandwidth usage is exponentially reduced since the requested images are a much smaller resolution and/or FPS multiplied by the number of cameras viewed at once.

Multistreaming allows setting different recording schedules and storage duration per stream. Hence, allowing upwards of months or years for lower quality storage and short weekly storage for the higher quality videos in the event of an incident where detail is important.

Here's an explanation of the key differentiators.

Some VMSes will automatically switch over from higher to lower quality streams when the user changes from single camera to multi-camera views. Others will require the user to manually select, which can become cumbersome and confusing.

Some VMSes only allow automatic switching of streams, making the decision for the user. Others will allow manual selection of specific streams at specific times for particular needs. Network Optix allows all cameras in a layout to be switched at once, but negates the automatic switching to high when in single camera view.  Avigilon does not allow manual override at all.

Users may want to know which stream they are viewing in case they need to switch or see higher quality. Some VMSes display this on screen or with a single click. Others hide it completely.

In addition to the camera supporting multiple streams, the VMS needs to integrate with those streams. Some VMSes have material limits in integration. For example, Avigilon does not integrate multi-streaming with many 3rd party cameras via direct integration even though those cameras are directly integrated for general use.

Most VMSes only support 2 streams - a high and low, typically selected by the VMS. However, some VMSes enable fine grain configuration of 3 or more stream settings. Genetec offers the most customization here.

With multiple streams at different quality levels, many VMSes allow recording a higher resolution one for short periods and the lower one for longer periods. NetworkOptix is one notable exception that does not support this, but allows for boosting between the high and low resolution streams.

Avigilon's dual streaming feature is included for Avigilon's H.264 cameras and automatically switches between high and low streams in live view. However, while a secondary stream was not enabled when directly integrating with Bosch, it was when using ONVIF (Axis ONVIF did not) and worked just as their own cameras.

Digital zoom will not change to a higher resolution when digitally zooming in missing out on finer details. Also, stream information / selection is not displayed.

Multistreaming is available in all editions with the exception of Exacq Vision Start. Adding a stream is done from the camera properties window and it informs the user of the number of streams available. Auto switching is the default, going from multi layout to a single view would show the optimized stream while allowing a manual override. When digital zooming, a low quality stream is automatically switched to a high quality one.

Genetec offers the most features for managing and using multistreaming. Each camera brand will show several streams that can be associated with up to 5 different stream usage types: Live, Recorded, High, Low, and Remote. The VMS will automatically switch to a preferable option taking into account whether the user is remote or local, CPU and bandwidth. The UI displays which stream is served and allows for a manual override by the user at any time. Digital zoom within a multi camera layout will switch to a higher resolution to take advantage of the megapixels even though a single camera view is not used.

There are no additional fees for this feature,and it is available in all of Genetec's editions.

Milestone supports multistreaming in the Xprotect Corporate version only (Live/recorded stream option is available in other editions) with no additional licensing costs. It pulls in as many streams as the camera supports and allows an Admin to configure when a particular stream should be used (ONVIF integration also); Live, Recorded, or as Default. The end user can, however, manually override the default stream selection set by the admin.

Here is the configuration option inside Corporate: 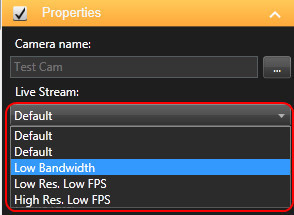 This VMS pulls in both High and Low streams automatically via ONVIF Profile S. It requires no additional licenses. Digital zoom is not available is this version and archive of low stream can be configured with a boost in quality in the event of motion, however no ability to modify the second stream's properties. Furthermore, displaying large camera layouts will randomly select which stream (high/low) to show in which pane based on CPU and if the panes are equal -if not it will revert to high for larger panes. Also, if bandwidth is low the FPS count will also fluctuate real time with no user intervention and both bandwidth and stream quality will become priority for the camera in focus.

Video Insight's implementation requires the user to add a registry key, add the camera twice and configure each with different bitrate and fps.  Once added both cameras must be associated together in order for the automatic switching to occur in layout mode.  Furthermore, version 5.5.16 requires a license for an additional stream(some brands).