Viewing live video is the first and most fundamental feature of video management systems. In this study, we tested 7 VMSes, comparing and contrasting features and the ease of use of the offerings.

We evaluated Avigilon, Exacq, Genetec, Milestone, Network Optix/Digital Watchdog, OnSSI and Video Insight to understand those differences and recognize what operators can expect using each VMS.

The image below shows a glimpse of each VMS side by side:

This video compares and shows the screen setups:

Wasting screen space because of different aspect ratios is not maximizing the real estate of the screen, so we examined how each VMS displays those ratios.

Client settings are important for ease of use and each operator’s needs- and preferences- are different. Some VMSes allow for customizations via UI and others do not.

The VMSes fell into 2 groups for dragging and dropping:

We looked for the basics such as camera name date/time and location first and found a few add-ons as well.

Sometimes, replaying the last few seconds or minutes of a camera's view is necessary for a speedy recap of an event. We identified how that's done from within each live view without having to access archived video. Other than timeline UI similarity in Avigilon, Genetec and OnSSI, each VMS implemented different variations. There are 4 ways to access replay mode:

There are two different cycling methods: Views/Layouts as a whole and camera groupings within a pane of a layout. There are 4 groups the VMSes fall into: 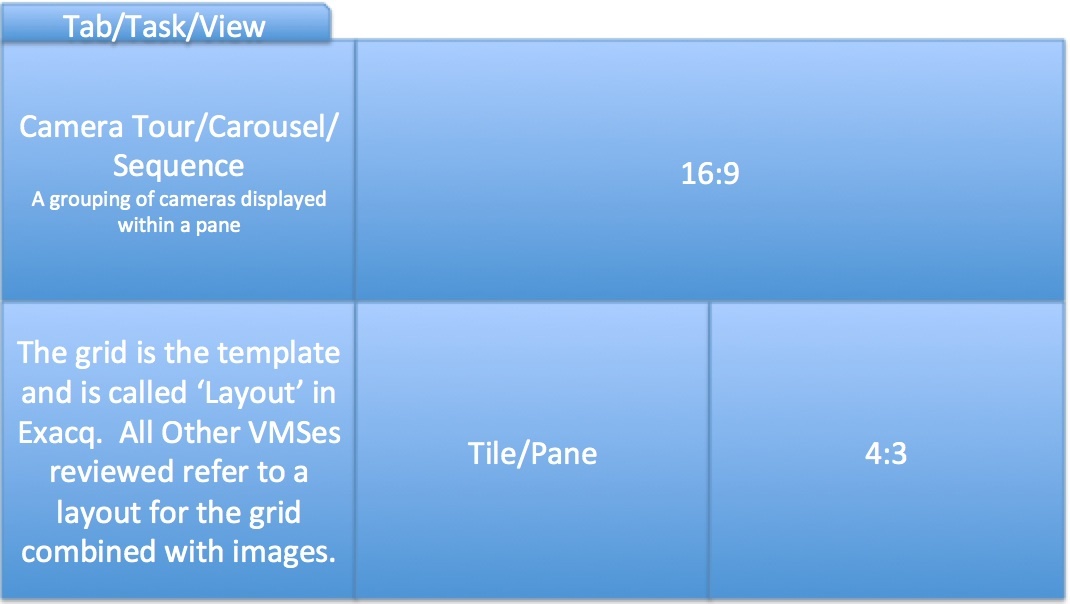 Send Live View to Others

Collaboration via a VMS client is becoming more mainstream and that ability is important when considering large organization or disbursed operators when information sharing is critical.

When a camera’s recording is off or motion detection hasn’t triggered yet, the operator should have the option to record manually in the event an incident is observed in live view.

VMSes have evolved to monitor more than just live camera streams; options to show websites, maps and other options are also available. OnSSI, Milestone and Genetec offer hotspot images (A pane within a layout that can be used to expand another camera within a layout), webpages views (OnSSI and Milestone) in panes of a layout and HD Witness offers a built in screen recorder that can be used for presentations.

Moreover, with the exception of OnSSI that offers no predefined keyboard shortcuts (requires customization by user), the rest of the VMSes offered a myriad of keyboard options, here are a few you may find helpful:

Genetec's Security Center includes large icons and many clear tool tips to find what the operator needs to navigate and customize their layout- which can also be easily hidden for the power user interested in using a myriad of keyboard options instead. They offered camera layouts ranging from a single camera layout to a max of 64 (no drag and drop within a layout), in addition to camera tours with customized dwell times. The manual record option readily available from the camera view or the dashboard offering several convenient ways to access it. Camera rotation, for vertical views, depends on whether the camera supports it or not and layout template creation is limited to an XML update which would require advanced skills. Note: Genetec version 5.2 tested.

Milestone's layout selection was the most comprehensive of any other reviewed VMS ranging from 1-100 (would anyone use that many?) and they were separated by 4:3 and 16:9, though a mixture of both ratios into a one layout is not a stock option (must use SDK). In addition, they offer advanced options: allowing users to embed a map (with overlayed cameras- Exacq as well) within a pane of a layout, in addition to a hot spot monitor, websites, alerts and flat images. The design of structured folders (much like OnSSI) to access layouts was tiring and long drawn when switching layouts is commonly used by operators. Note: version 8.1a/8.0a build 1306 tested.

This VMS will appeal to those interested in creating customized templates for layouts, if the existing stock options don't seem to satisfy their needs. It offers the least complexity (compared to Exacq's layout option which is more complex) with the ability to "draw" a layout template of your choice by simply adding/removing lines. The ability to collaborate (Enterprise only) and easily record as well as drag and drop within a layout are also available. Avigilon's most disappointing omission was the user's inability to save a view (aka layout) in the core version - upgrading to Standard is a must. Moreover, the ability to apply a date/time overlay must be done at the camera. Note: version 5.0.0.50 tested.

The stand out for Exacq was the ability to customize the image overlays which include name/date/time/font/size and color. Exacq's requirement of creating an Event trigger to manually record as an operator was cumbersome. They, offered the ability to create customized layout templates, albeit more complex than Avigilon's straight forward. Many camera details can be gathered from a right click in live view, but the ability to delete a camera from view requires 2 clicks. Note: version 5.6.5.44358 tested.

OnSSI's client was the most minimalistic view when compared to the other VMSes. As a new user to this VMS it was clear to see that using the screen real estate for the live images was priority and accessing buttons/tools/options was secondary. Layout selections from the View menu involved a hierarchical folder structure and didn't allow for an easy selection of layout switching. No predefined keyboard shortcuts for maximization (would have to be customized), no left pane for easy drag and drop of cameras. They do offer the send to user option and camera tours (pre-created by admin or created by user) within a pane as well as a predefined list of layouts to choose from (1-64). Note: version version 8.0c/3.6 tested.

HD Witness's ability to create layouts was different than any other VMS; no predefined templates or grids to use. They allow the user to rotate (0/90/180/270) any camera regardless if the camera supports it or not. Furthermore, the user can define whether it is a 4:3, 16:9 and even the cell spacing between each camera (none-large). The inability to record a camera manually prevents users from recording incidents immediately in cases where the camera's motion detection hasn't triggered yet or the camera is set to record off. Note: version 1.51 tested.

Video Insight presents problems for using cameras with different aspect ratios. The way the VMS manages to display aspect ratio is wasteful and shows a disregard to the end user's screen space. Creating layouts and tours (which they do offer) requires nested child windows, but selecting the layouts once they are created is easy and more inline with other VMSes (Exacq, Avigilon) standards. The send to user option is easy to find/use and appears as a pop-up (can be blocked by receiver and cannot be retrieved once sent/blocked,) which is harder for the receiver to ignore. In addition the manual record option, once activated by operator, is accessible and will default to 30 minutes of record time - though the tool tip misleadingly states "always". Note: version 5.5.16.3 tested.

Milestone Acquired by Canon on Jun 13, 2014
Industry insiders have been speculating about Milestone being acquired for...
Comments (28) : Subscribers only. Login. or Join.