Their new "Smart Stream" feature intelligently compresses video streams such that moving objects get higher quality than background, stationary parts of the scene. Here is their promo video:

How Is This Done?

This absolutely saves bandwidth compared to using a single compression level. However...

The IPVM Test of Smart Stream

Smart Stream is an interesting addition to IP cameras, with the potential to reduce bitrates, especially in low motion scenes. We recommend it be used in Vivotek cameras whenever it is available. However, even with it turned on, the IP8371 did not deliver bandwidth / storage savings compared to competitors.

We found the IP8371E's performance average, especially considering its price, higher than many competitors. Other options may deliver better IR performance with lower bitrates at similar or lower prices.

In this video, we review the physical features of the IP8371E IR bullet camera. The housing remains much the same as the previous generation IP7361, though the IR LEDs have been replaced with newer, larger, more powerful components.

Smart Stream works by increasing quantization on "background" areas while reducing it on "foreground" objects. By default, this is automatic, with moving objects considered foreground, but it may be applied to fixed regions of interest as well.

We review these options in this screencast:

This example image demonstrates "foreground" and "background" in an indoor field of view with a person walking through the scene: 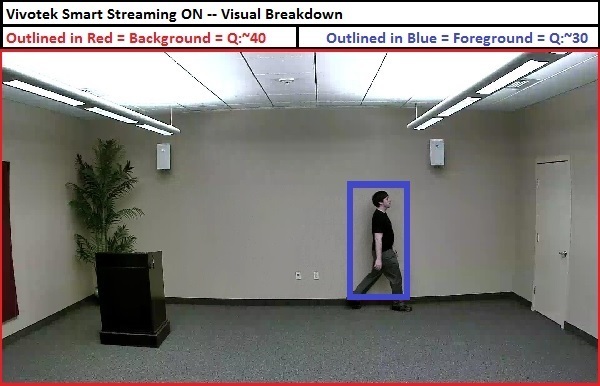 Below, we have compiled a few example comparisons demonstrating the impact Smart Stream has on image quality. Users can click on an image to download a full-size comparison, to better distinguish the differences with smart streaming being off or on.

Indoors in full light (our conference room), Smart Stream "on" compressed the carpet and ceilings of the room, while our subject appears detailed and distinguishable. We have highlighted areas of noticeable compression in red. 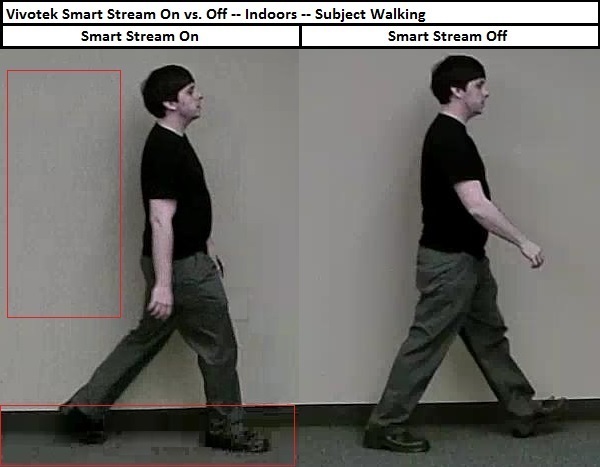 Readers can see this in motion in this clip:

Moving the cameras outside, we shot the Vivotek IP8371E against a busy road to test Smart Stream in a real world application. Trees and fence are compressed in the background of this scene, as is the pavement in the foreground is also compressed. On average, bandwidth savings were ~0.5 - 1.0 Mb/s with Smart Stream turned on.

We gathered bandwidth measurements with the cameras normalized to 10 FPS, 1080p resolution with Q = ~28-30 for all cameras. Measurements are presented in Mb/s. Note the Vivotek IP8371E default and Smart Stream measurements, which provide various savings in different scenes between being on or off.

At night, we set up the cameras outdoors to accommodate a deeper FOV to test IR range. Below is an image of the FOV used. 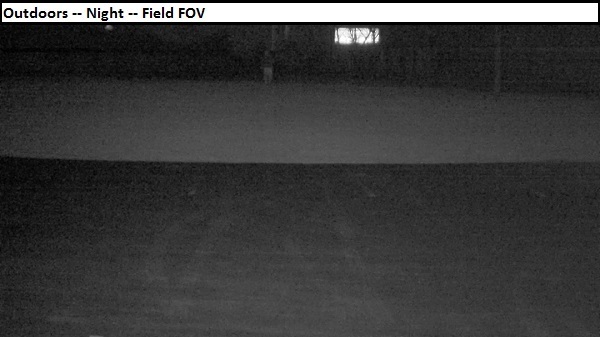 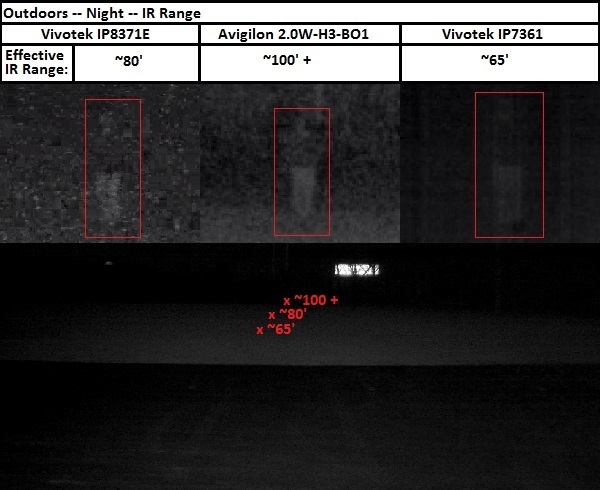 Our subject then held the test chart in front of the cameras at a ~30' HFOV. From here, the Avigilon IR camera is able to produce the most details from the test chart, as well as out subjects eyes and head, while the Vivotek IP8371E was afflicted with large amounts of gain, making it difficult to produce details. 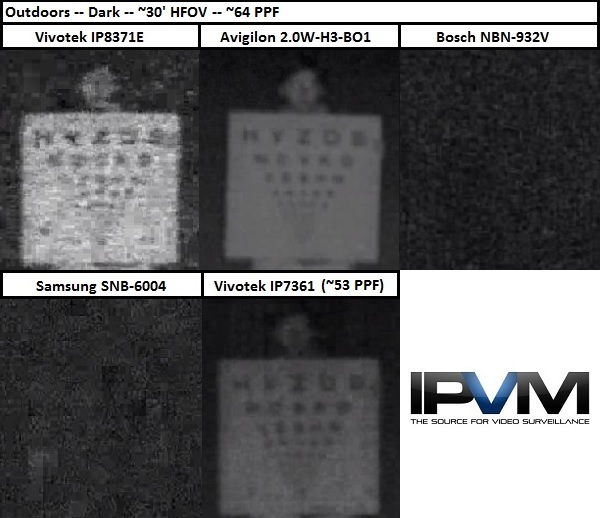 Finally, we tested the cameras indoors to compare image quality in a controlled environment. Below is the FOV used for testing. 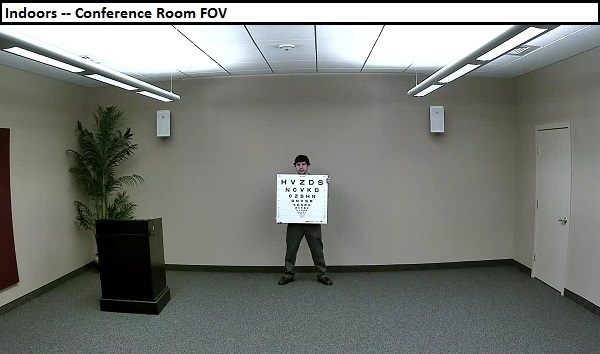 In full light, the Vivotek IP8371E is comparable to other manufacturers tested, though moderately desaturated. It also appears oversharp compared to other cameras, with artifacts visible around the edges of objects. 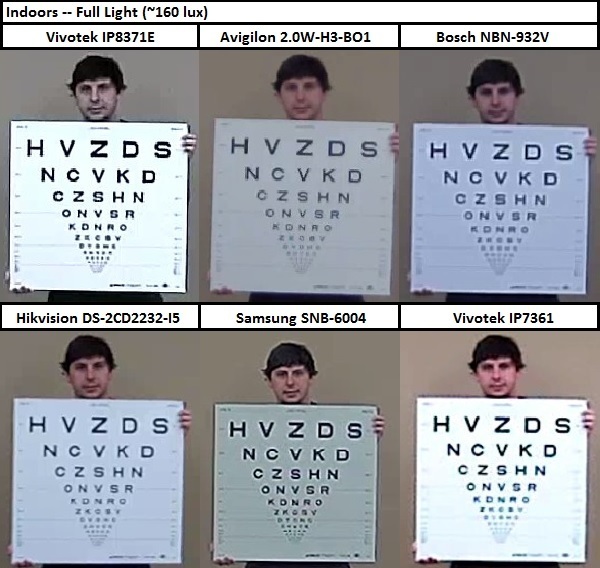 Indoors, gain has less impact on the IP8371E's image (since IR illumination is reflecting off the white walls of the conference room). Also note the less concentrated illumination pattern of the Vivotek IP8371E compared to the IP7361's central hotspot. 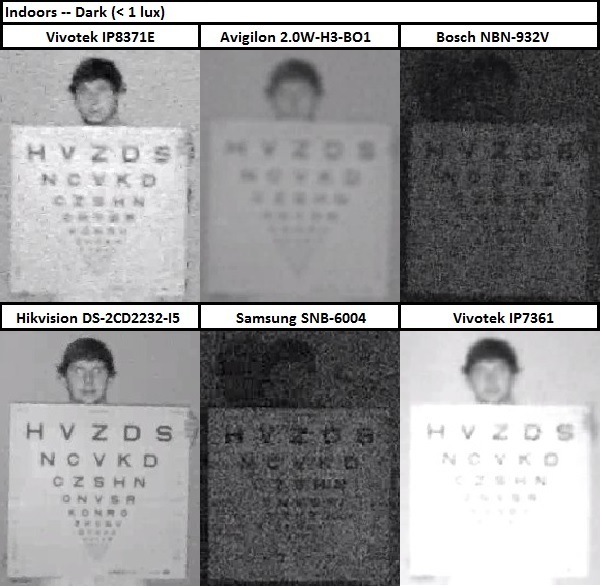 The following version of Exacqvision was used for this test:

Vivotek 20MP Multi-Imager Tested on May 30, 2019
Vivotek has released their latest repositionable multi-imager camera, the...
Testing Axis Zipstream on Apr 13, 2015
Has Axis found its breakthrough differentiator? Can they demand a premium for...
Axis Zipstream Claims Average 50% Savings on Mar 25, 2015
Axis claims that its new Zipstream compression technology can "lower...
Comments (6) : Subscribers only. Login. or Join.